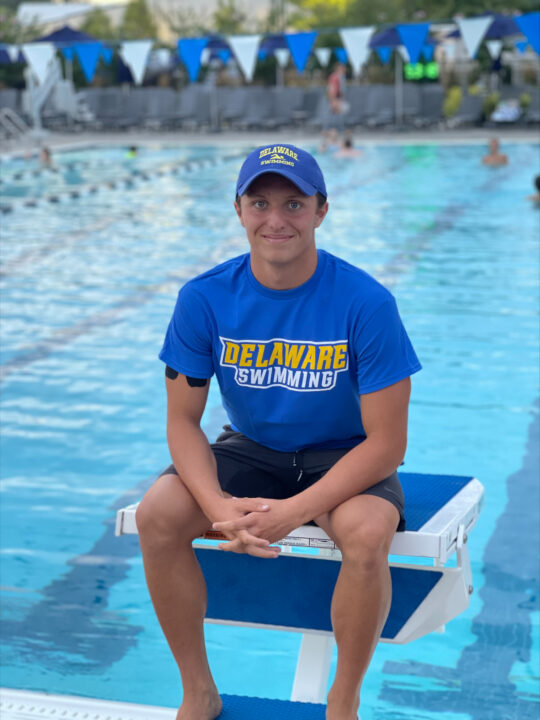 Delaware High School Champion, Max Moen, will remain in-state, announcing his commitment to the University of Delaware for the 2023-2024 season. Current photo via Max Moen

Max Moen, a Delaware High School Champion, has recently announced his decision to remain in-state and attend the University of Delaware. Moen is entering his senior year at the Charter School of Wilmington and is expected to arrive in Newark ahead of the 2023-2024 season.

Moen trains and competes with Diamond State Aquatics in Wilmington, Delaware. In addition to being a Delaware State Champion, he is also a Futures qualifier. Moen is quite versatile, excelling across all strokes, including IM.

At the 2022 Delaware High School State Championships, Moen competed in the 200 free and 100 fly individually, and also led off his high school’s 400 freestyle relay team. In the 200 free, he paced the field in both prelims and finals, setting a new personal best of 1:41.19 in the heats. He essentially matched that in the final, touching the wall in 1:41.22.

In the 100 fly, Moen placed fourth overall in a time of 51.20, eight-tenths off of his best time from December 2021. Leading off Chart School of Wilmington’s 400 free relay, Moen cruised to a 47.65, earning a new personal best by 18 one-hundredths of a second.

The University of Delaware is a Division I Mid-Major program that competes in the Colonial Athletic Association (CAA) Conference. At the 2022 Championships, the men’s team finished in 2nd out of 5 teams. This was their best CAA finish in program history. Head coach Pablo Marmolejo has been leading the Blue Hens since 2018, and it was recently announced that his contract has been extended through 2025.

Heading into his senior year, Moen currently holds several times that would place him solidly in the B-final at the CAA Championships. Being so versatile, Moen will be able to fill in and score points in a wide variety of events, depending where the Blue Hens end up needing him by 2023.

In the 200 free, Moen’s best event, he would have placed 12th overall at last year’s championships and 3rd for Delaware. Delaware’s top finisher in that event, Bryce Cieko, was a redshirt senior last season, and will not be around by the time Moen arrives.

Delaware has not yet announced any other 2023 commitments on the men’s side.

Marmalejo is an outstanding head coach. The head coach before him, Hayman… not so much.