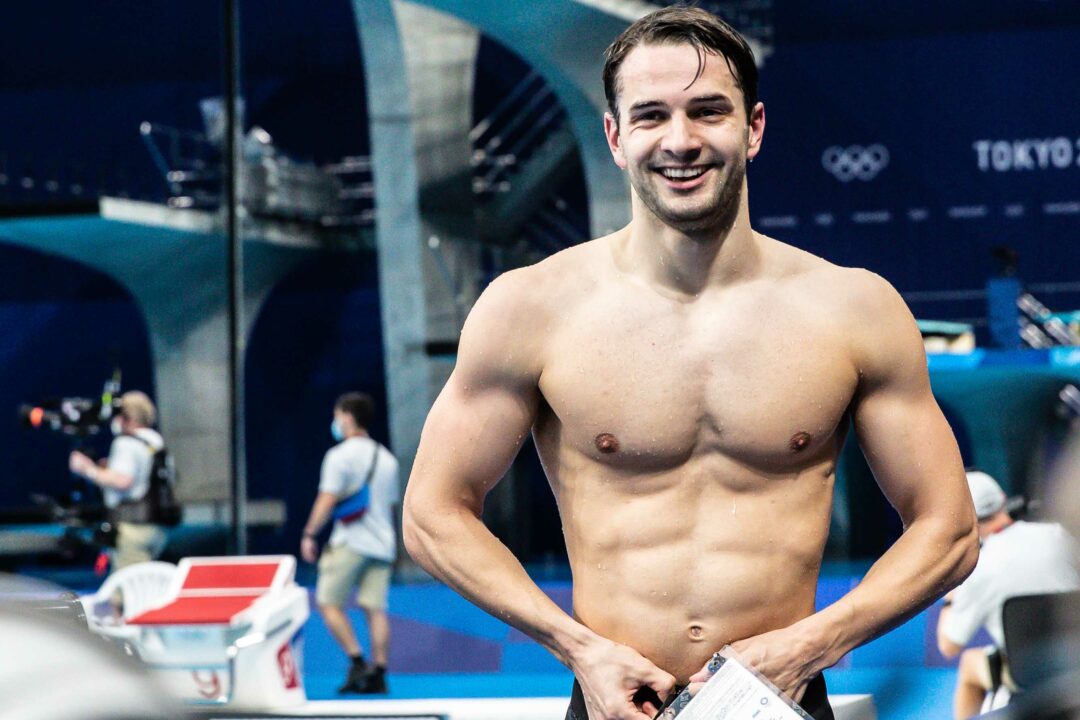 Arno Kamminga is now the big favorite for gold in the men's 100 breaststroke at the World Championships after Adam Peaty dropped out with a broken foot. Archive photo via Jack Spitser/Spitser Photography

The women’s 100 back in Budapest will feature the three fastest swimmers in history and the only ones who have broken 58 seconds.

While the majority think it won’t happen, there’s a sizeable number of fans optimistic we’ll see a swimmer break 1:44 in the 200 free this year.

Emma McKeon is among the Australian swimmers who have opted out of the World Championships to gear their focus towards the Commonwealth Games.

Our most recent poll asked SwimSwam readers which swimmer will gain the most from the depleted field at the 2022 World Championships:

Question: Which swimmer stands to benefit the most from the huge absences at the 2022 World Championships?

A variety of circumstances have led to this year’s World Championships missing several of the best swimmers on the planet.

Some, like top Australians Emma McKeon, Ariarne Titmus and Kyle Chalmers, are opting to put all of their focus into the Commonwealth Games, which are just over a month after Worlds. That is also reportedly the case with South Africa’s Tatjana Schoenmaker.

The entire Russian team, including Evgeny Rylov and Kliment Kolesnikov, are ineligible to compete due to FINA’s ban stemming from the Russian invasion of Ukraine.

There are also individual circumstances that result in reigning Olympic and world champions Adam Peaty and Maggie MacNeil both not in the field of their respective events (though MacNeil is expected to still swim relays).

These absences led to the question: who benefits the most?

Leading the poll with just under 42 percent of votes was Dutch breaststroker Arno Kamminga, who has established himself as the clear #2 in the men’s 100 breaststroke behind Peaty and is now in line to win his first World Championship title in Budapest.

Peaty owns a staggering 24 of the 29-fastest swims in the event’s history, while Kamminga owns four of the remaining five (Michael Andrew has the other). Kamminga is also the only swimmer other than Peaty to have cracked the 58-second barrier, and he’s done so twice (also going 58.00 to win silver in the Olympic final).

Kamminga is the clear beneficiary in the 100 breast, but it’s still only one event. The Dutchman is much better in the 200 (Olympic silver medalist) than he is in the 50. Peaty’s absence in the 50 makes for a pretty wide-open field in Budapest, not to mention that Belarusian Ilya Shymanovich, the fifth-fastest performer ever, will also be absent since Belarus was banned alongside Russia as a result of the invasion of Ukraine.

Receiving the second-highest number of votes was Hong Kong’s Siobhan Haughey, who, unlike Kamminga, clearly benefits from some of the major absences in multiple events.

Haughey, like Kamminga, won double silver in Tokyo, taking second to McKeon in the women’s 100 free and earning silver behind Titmus in the 200 free.

Both of those names will be absent at Worlds, opening the door for Haughey to have a clear shot at winning gold in both. The 100 free will also be without bronze medalist Cate Campbell, and the 200 won’t have Katie Ledecky, who was among the pre-race favorites but faded to fifth. Campbell is taking a break this year as she ponders returning for a push for Paris 2024 next year, while Ledecky dropped the 200 free from her World Championship lineup to narrow her focus for the 400, 800 and 1500 free.

As an aside, Ledecky certainly benefits from Titmus’ absence in the women’s 400 free, and Caeleb Dressel now has a much easier path to gold in the 100 free without Chalmers and Kolesnikov. However, they weren’t included in the poll as there’s a good chance they both would’ve won gold no matter who was in the field.

American backstrokers Ryan Murphy (15.2%) and Hunter Armstrong (12.0) finished third and fourth in the poll, both benefitting from the absences of Kolesnikov and Rylov in the men’s backstroke events.

After breaking the world record, Armstrong would likely already be penciled in as the favorite over Kolesnikov in the 50 back, but he’s now the clear #1 in the Russian’s absence. Murphy hasn’t been able to beat Rylov in the 200 back since 2016, so now he’s got a great chance to win the world title in his absence.

In the 100 back, the four of them would be going in with a chance to win if they were all competing, but with Rylov and Kolesnikov out, Murphy and Armstrong benefit equally as they’ll be the favorites to go head-to-head for the gold.

Sjostrom primarily benefits in the women’s 50 free. She was the Olympic silver medalist last summer, and six of the seven other finalists won’t be in Budapest (if China’s leaked roster is correct and Wu Qingfeng won’t be there). Among those seven are McKeon, Campbell, Pernille Blume and the now-retired Ranomi Kromowidjojo.

Sjostrom has said she won’t race the 100 fly at Worlds, but she also benefits from the openings in the 100 free, an event in which she was fifth last year at the Games.

For King, she would slot in as the favorite in the women’s 200 breast if Schoenmaker is indeed out of the championships, though SwimSwam has yet to receive official confirmation from her camp.

King was second in the 200 breast in Tokyo behind Schoenmaker, and we also won’t see either the third (Annie Lazor) or fourth-place finishers (Evgeniia Chikunova) in Budapest.

Kate Douglass, who upset Lazor to earn the second U.S. spot in the event at Trials last month, could very well end up being King’s biggest challenger in the event.

On top of the 200, it’s easy to forget that King fell to third in her pet event, the 100 breast, at the Olympics in 2021. But she’ll be the only one of the top five from Tokyo in Budapest, with Lazor snagging the second U.S. spot from gold medalist Lydia Jacoby, and then Schoenmaker, Chikunova and Russia’s Yuliya Efimova also out of Worlds.

For Zhang, she’s already the clear favorite in the 200 fly as the reigning Olympic champion, but her path to 100 fly gold got a lot easier with MacNeil and McKeon out of the event (plus Sjostrom).

At the Tokyo Games, MacNeil, Zhang, McKeon and American Torri Huske were separated by just 14 one-hundredths of a second in the battle for first, and now that four-horse race has been whittled down to two, unless someone else can step up and join the sub-56 party.

Below, vote in our new A3 Performance Poll, which asks: Which 200 changes the most from short course yards to long course meters:

Katie Ledecky will benefit in the 400 and perhaps the 200.

She’s not swimming the individual 200.

Real poll of the week:

Who is the biggest ring chaser? Upvote for Pat Callan, Downvote for Maxine Parker

Odd choice. Kamminga likely wins the 100 breast now but that’s it. Haughey, Murphy and King all got multiple podium finishes without winning, and all of them have had the people who beat them removed in multiple races.

How does no one pick MA? He’ll probably only be getting his first individual medal because of Peaty’s absence.

He cracks under pressure

Well yeah, I just assumed no Peaty would mean much less pressure.

I wouldn’t say it’s the pressure.. More like he tires himself out after 2 races.

He cracks under lactate.

Because Kamminga is nealry half a second faster than MA, and MA is inconsistent.

Edit: I’m not saying MA can’t or won’t win, just that Kamminga is rightfully the favorite, and MA winning would be an upset. Not a shocking upset, but an upset.

his stroke rate is not high enough to win

For sure, but to at least medal. I don’t think anyone doubted Kamminga would likely medal in all three breaststroke races.

Michael Andrew is all hype and no individual medals.

Not exactly true. Kid just gets wrecked after a long prelims/finals format and tends to miff the big races.