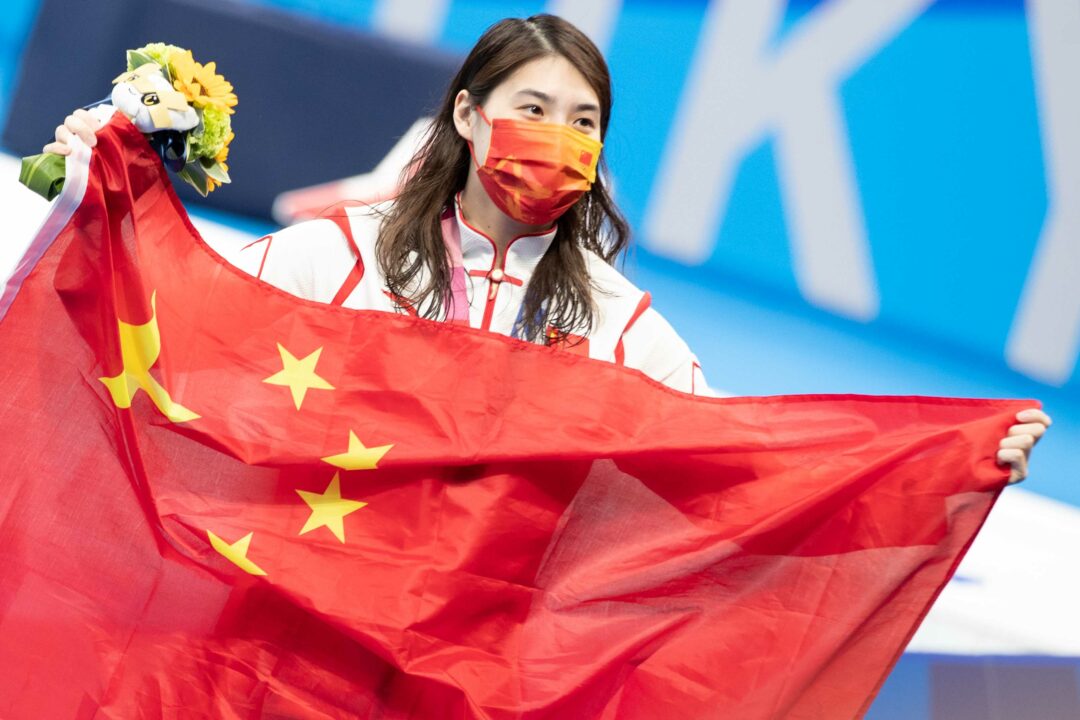 The status of many of China's star swimmers, like Zhang Yufei, will be dependent on the stingent COVID-19 travel restrictions in the city of Shanghai. Archive photo via Jack Spitser/Spitser Photography

According to the Twitter page Chinese News and Swimming Results, Chinese media has leaked the 45 swimmers that will be competing at the 2022 FINA World Championships in Budapest this summer. The Chinese Swimming Federation has yet to confirm these names.

Media leaked a version of Chinese Swimming roster for World Championships in Budapest. 16 coaches and 45 swimmers (open water swimmers included) are on the roster. CSA hasn't officially posted it on their platform yet. pic.twitter.com/jyuXjWsZfL

Big names that are missing from this roster include Wang Jianjiahe, the defending worlds bronze medalist in the women’s 1500 free; Yu Yiting, the world junior record holder in the women’s 200 IM; and 2012 200 and 400 IM Olympic champion Ye Shiwen. Shiwen, who did not qualify for the 2020 Olympic Games, plans to train for the 2024 Paris Olympics.

However, Chinese Swimming News and Media reported that seven swimmers (Zhang Yufei, Yan Zibei, Qin Haiyang, Sun Jiajun, Tang Qianting, Wang Yichun and Peng Xuwei) currently training in the of Shanghai will be subject to the city’s COVID-19 travel restrcitions, which may put their participation at Worlds in jeopardy. The training center in Shanghai is currently open to national level swimmers only.

The Chinese Nationals from April 15 to April 20, as well as the Chinese Spring Championships from April 24 to 29, were set to be selection meets for Worlds. However, both of those meets were reportedly postponed indefinitely due to COVID-19. The 2022 Asian Games and the 2021 World University Games (that were postponed to 2022), both set to happen in China as well, were also pushed back to 2023 for the same reason.

Instead, the Worlds team was speculated to be selected based off performances in “internal tests” that the Chinese Swimming Federation gave swimmers at a training camp. All swimmers who had hit FINA ‘A’ cut times were gathered to participate at the camp.

Speculation is that swimmers who already got FINA cuts will be gathered in the camp, and a team will be selected based on internal tests. The Nationals is most likely not going to happen before the qualification period ends.

Quite a large roster considering the mess in China right now. I wonder what surprise they’ll have in store for us. All 4 of their 4×200 free gold medalists are listed. All of their 4×100 mixed medley medalists are listed. Will they actually target the 4×100 free this time? Wu Qingfeng is missing from their 4×100 free finalists but they can probably still put together a medal contending team if Zhang Yufei and Yang Junxuan swim it.