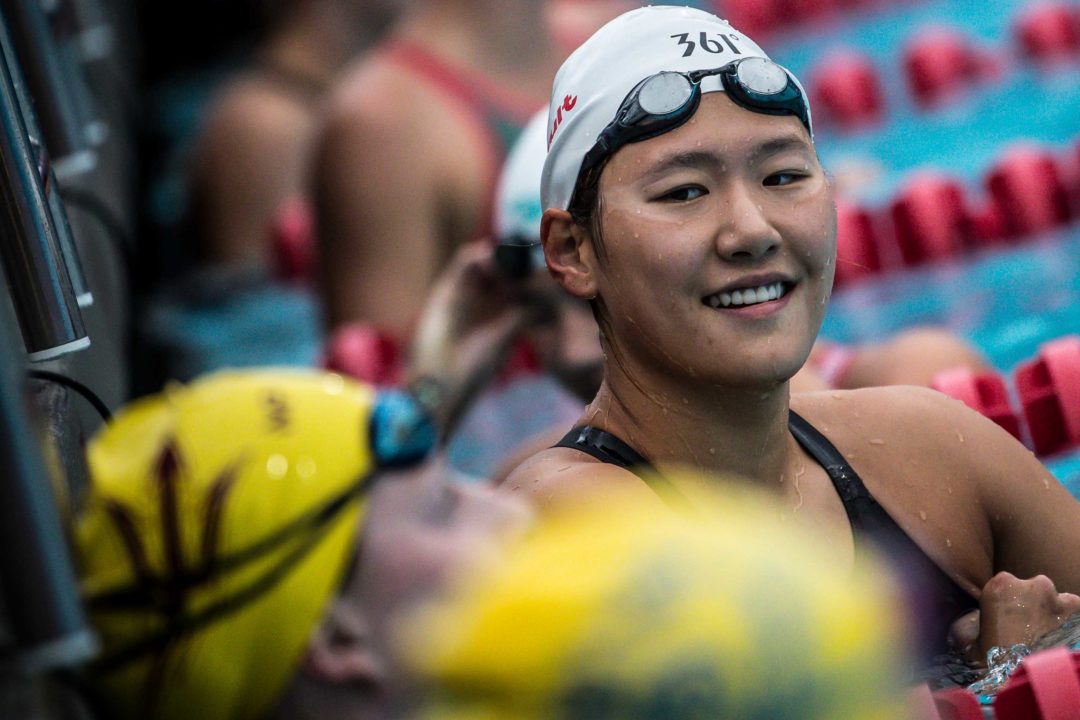 The double Olympic champion from China has stated that she plans on racing until at least 2024 in order to vie for a spot on her 3rd Olympic squad. Archive photo via Jack Spitser/Spitser Photography

In a recent interview, Olympic gold medalist and former world record-holder Ye Shiwen revealed that she plans to swim until at least 2024 and will attempt to qualify for the Paris 2024 Games. Footage of the interview can be seen here on Sina Weibo. Chinese Swimming News and Results, a Twitter account dedicated to sharing news about Chinese Swimming, shared the story on May 12.

https://t.co/GT4VVFhhCD
Ye Shiwen said she is aiming for Paris 2024.
She also said she originally decided to skip Asian Games to focus on her study at Tsinghua University this year, but now the postponement gives her the chance to compete at AG in her home city.

Shiwen also said in the interview that while she was originally planning on skipping the 2022 Asian Games this summer due to school commitments, the delay in the meet will allow her to participate. The Games were originally set to take place from September 10 – 25, 2022 in Hangzhou, China, but will now be held at a later date, to be announced.

The apex of her career thus far, however, came in 2012 when Shiwen became a double Olympic champion in her signature IM events. She delivered a 4:28.43 world-record-breaking swim in the 400 IM to beat out Elizabeth Beisel who placed second with a 4:31.27 and posted a 2:07.57 Olympic and Asian record in the 200 IM. Shiwen held on to that record for 4 years until Katinka Hosszu lowered it to a 4:26.36 at the Rio 2016 Games.

Shiwen returned to race at the 2016 Olympics but finished 8th in the 200 IM and 27th in the 400 IM. She had a bit of a comeback in 2019 when she took silver in both IM events to fellow Olympic Champion Katinka Hosszu.

Shiwen was a notable absence from the Chinese Olympic roster in 2021 after she missed the FINA A cuts at both qualification meets for the Games. Shiwen was also absent from the list of swimmers expected to race at the 2022 World Championships for China this summer, according to Chinese Swimming News and Results:

Several provinces have announced swimmers who will go to World Championships in Budapest. Below is the summary of publicly available information as of now. Some other provinces are yet to make announcements. CSA also hasn't released official roster now. pic.twitter.com/bSjTGh2VoF

Media leaked a version of Chinese Swimming roster for World Championships in Budapest. 16 coaches and 45 swimmers (open water swimmers included) are on the roster. CSA hasn't officially posted it on their platform yet. pic.twitter.com/jyuXjWsZfL

Now she can be clowned on by summer

How do you know that? More swimmers are yet to come. It’s not a two-person race at all.