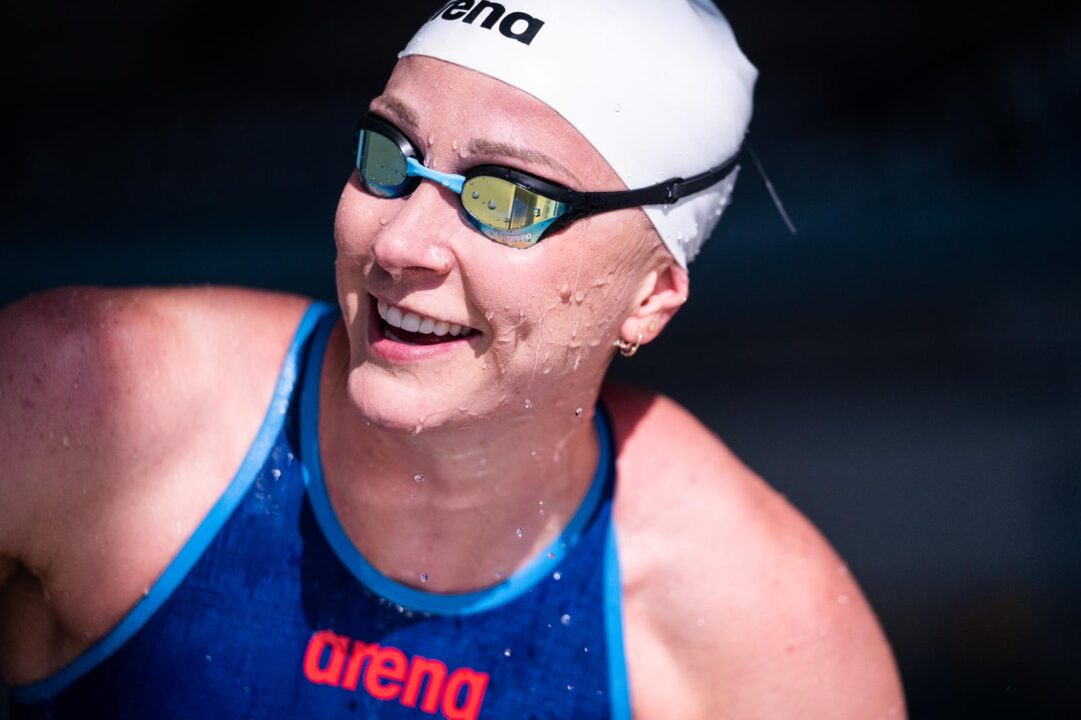 Sjostrom spoke about a recent 2-week training camp and choosing to skip the 100 fly individually at this year's world championships.  Current photo via Mine Kasapoglu

We sat down with world record holder Sarah Sjostrom while she was at the arena photoshoot in Marseille, France. The 14x World champion spoke about a recent 2-week training camp, being with arena for over a decade, and choosing to skip the 100 fly individually at this year’s world championships.

For the World Champs in Budapest, Sjostrom told SwimSwam that instead, she’ll focus on the 50 fly, 50 free, and 100 free. Sjostrom is the World Record holder in the 100 fly, and at her peak was untouchable in the event. She has an Olympic gold medal and 4 long course World Championship gold medals in the event.

She hasn’t been sub-56 seconds in the event since the 2017 World Championships, though, and with four other women going 55s in 2021 (Maggie MacNeil, Zhang Yufei, Torri Huske, and Emma McKeon), that is becoming the new standard for global medals.

MaggieCAN
MacNeil
View Top 41»
Sjostrom finished 7th at the Olympics in the 100 fly after breaking her elbow earlier in the year. She said last year that her freestyle came along faster than her fly because of the muscle atrophy caused by the injury – she felt more imbalance in the butterfly races than in the freestyle races. That was supported by the fact that she still took silver in the 50 free in 24.07.
Sjostrom’s potential international schedule includes the World Aquatics Championships in Budapest from June 18-25, the European Aquatics Championships in Rome from August 11-2022, and the World Short Course Swimming Championships that are currently scheduled from December 17-22 in Kazan, Russia.

Just RE all the medley relay talk. I have a sneaking suspicion Coleman may have retired? She has not posted anything swimming related, she didn’t attend the Swedish camp in Tenerife, and seems to now have a job in marketing. Swimswam can you reach out ??

And she just posted about her new job.

Why would Sjostrom mention Coleman re medley relay if she is retired? It’d be a big shame if Sweden finally has 4 legs and one retires.

Well, she hasn’t officially retired but there are no signs that she is still swimming…

NOOOO Hanson can swim back now the medley would be fire

Coleman will not compete this season for mental health reasons but will keep training for the 2024 Olympics.

A little off topic, but can we get an interview with Charlotte Hook? I feel like she really gets overlooked by Curzan’s success, but she’s so amazing. World SC silver in the 200 Fly, OT’s 3rd place finisher in 200 Fly (nearly made the team), and 3rd time being on National Team. World trials are in a few weeks, and I really think Charlotte could surprise us and get on the team this year

Off topic and Curzan just beat her in the 200 fly.

As others have pointed out, this is off topic. But also, why would a person who failed to make the Olympic team be a priority to interview? There are a slew of Olympians, including multiple gold medallists, who haven’t been interviewed by SwimSwam. There are a slew of World Championship winners who haven’t been interviewed. I’m just wondering what is the reasoning behind interviewing a random American who isn’t notable. Why not suggest an interview with Lizzy Dekkers? Or Kim Busch? Or Elena Di Liddo?

This whole conversation is off topic, but to be fare, she does have a worlds silver to her name and is the #2 recruit in C/O 2022. There have been interviews with HS swimmers like Mariah Denigan, Paige McKenna, Claire Tuggle, etc.

Coleman, did you interview Dressel while in Chicago?
If yes, when is it going to be uploaded?

Yes. Soon👀 can’t say when for sure though, Mel will be posting it

“For the World Champs in Budapest, Sjostrom told SwimSwam that instead, she’ll focus on the 50 fly, 50 free, and 100 fly.”

Her 100 fly in medley relays would be useful

They’ve got a Hansson for that.

Probably, but not if Sjostrom can’t swim fly for w/e reason, Coleman-Hanssons-Sjostrom is still pretty good. (And has Louise swam a LCM 100 back recently? After SC WC you’d assume she’s got a big drop coming and why her on back would be the best combo.)

200 Free is what she should swim

Even if she swims a PB (unlikely with her age and focus towards sprints) she could still miss the podium altogether. Titmus and Haughey have been 1:53 in the past year, Florida Ledecky could get there too. Add in Tang and Yang hovering in the low 1:54s, and goodness knows what McIntosh might do.