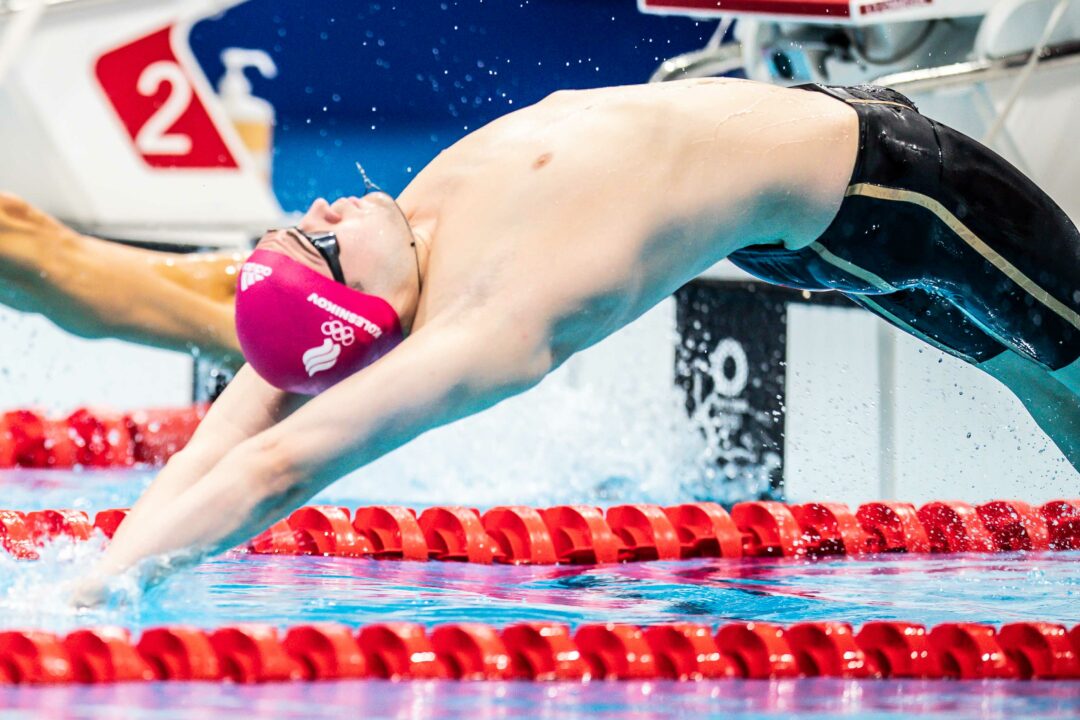 FINA also announced that it is pulling the 2022 Short Course World Championships out of Kazan. Archive photo via Jack Spitser/Spitser Photography

Just hours after Olympic champion Evgeny Rylov announced his withdrawal from the 2022 World Championships in Budapest, FINA officially announced that all Russian and Belarusian athletes would be banned from the competition.

FINA, which had previously resisted implementing a full ban on Russian athletes and instead said it would evaluate participation on a case-by-case basis, said the decision came after the FINA Bureau met Wednesday following the conclusion of an independent risk assessment.

“Further to the FINA Bureau’s decision on 8 March 2022 and the new measures at its disposal to exclude Russian and Belarusian athletes and officials from FINA competitions, and following the review of an independent risk assessment, the FINA Bureau met today and confirmed that athletes and officials from Russia and Belarus will not take part in the upcoming 19th FINA World Championships Budapest 2022,” the organization said in a statement.

FINA says that the Russian Swimming Federation informed them that all Russian aquatics athletes would withdraw from all FINA events for the rest of 2022 after learning of the international governing body’s decision.

Additionally, FINA announced that it was pulling the 2022 Short Course World Championships out of Kazan, where the championships were previously scheduled for December 17-22. FINA says those dates will be maintained and that it is currently in discussions to find a new host.

Rylov, who announced that he would not compete at the World Championships earlier Wednesday morning in support of other Russian athletes who have been banned from various international sporting events, was seen at a pro-war rally last week in Moscow, resulting in him losing his sponsorship deal with Speedo.

FINA added that its Disciplinary Panel is looking into Rylov for a potential violation of FINA rules.

“Separately, the FINA Executive confirmed that the FINA Disciplinary Panel has opened a procedure against Russian swimmer Evgeny Rylov for a potential violation of the FINA rules following his alleged participation in a pro-war rally at the Luzhniki Stadium in Moscow,” the organizaiton said. “The FINA Executive has requested that the Panel’s proceedings be expedited.

“FINA maintains its strongest condemnation of the Russian invasion of Ukraine. FINA also wishes to reiterate its commitment to supporting the Ukraine Swimming, Diving and Artistic Swimming Federation as they prepare for upcoming competitions.”

Rylov was the top performer for the Russian Olympic Committee (ROC) at the Tokyo 2020 Olympic Games, winning a pair of gold medals in the men’s 100 and 200 backstroke.

The country’s other individual medalist at the Games was Kliment Kolesnikov, who won silver behind Rylov in the 100 back and added a bronze medal in the men’s 100 freestyle.

Belarus won no swimming medals in Tokyo, with the top performers being Ilya Shymanovich and Anastasiya Shkurdai, who both made one individual final apiece. Shymanovich was eighth in the men’s 100 breaststroke, and Shkurdai finished in the same position in the women’s 100 butterfly.

It’s about time, FINA has been a bit slow on the draw.

SwimSwam, I think it’s worth writing some stories about Belarusian swimmers, as they were always ignored.
https://by.tribuna.com/tribuna/blogs/editors/3027762.html
Many Belarusians don’t agree with the election result in 2020. At that time, athletes were required to sign a pro-government letter, otherwise they will face financial consequences. National team swimmers refused to sign it, and since then their budget was cut and many lost their scholarship. So their situation is actually quite different from the Russian swimmers, as they lack financial support from their own government. And without a competition now, they lost other income sources.

In the article linked above, an anonymous person from Belarusian swimming asks:
Why in 2020, when… Read more »

I think the third place competition of the men’s medley relay will be very interesting.
Italy, Australia and Japan are very close.
And it seems that the United States will be able to win a medal again in the men’s 4 x 200m free relay.

Australia will be missing Chalmers.

3/4 of the people who earned medals at 2019 World Championships doped.

I will never understand people who just throw a “whatabout” at every single thing that ever happens.

Okay, so in the lead up to 2016 (Olympics) there was a proven State Doping program. Now the country invades a small, almost defenseless country – and threatens the rest of world with nuclear war if we intervene. Why did this take so long, and how about putting an extended time period on the ban. IOC and FINA should lead the way and say no more competing this decade, we’ll review your actions and choices in 2030. As for the athletes who want out, other countries should welcome them (and their families) for citizenship and sport representation.

If they get started on the citizenship change process now, they’ll be ready for Paris.

I remember trump blackmailing Zelenskyy for making up lies about Biden. Like… you know… the kind of stuff others go to jail for….