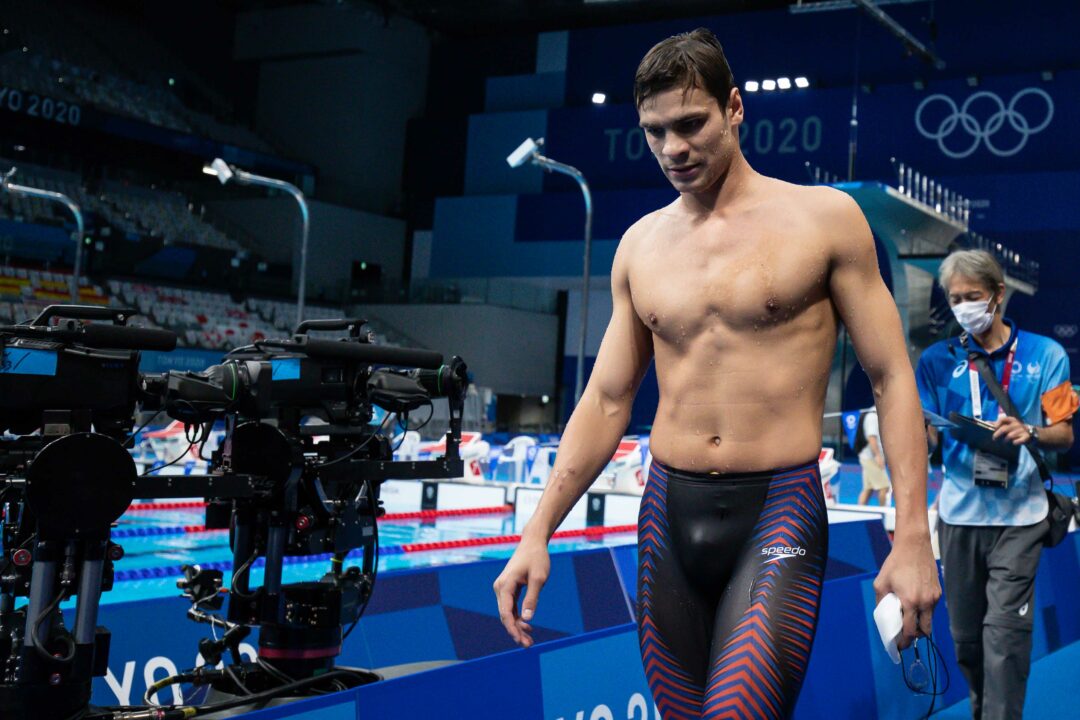 Speedo is dropping the Russian backstroker after he appeared at a pro-war rally in Moscow last week. Archive photo via Jack Spitser/Spitser Photography

Swimwear brand Speedo has announced it is ending its contractual relationship with Russian swimmer Evgeny Rylov after his appearance at a large pro-war rally in Russia on Friday.

Speedo announced the news in a press release Monday, terminating its sponsorship deal with Rylov and noting it would donate any outstanding sponsorship fees to the UN Refugee Agency (UNHCR).

The organization issued the following statement:

Following his attendance at the Luzhniki Stadium in Moscow at the weekend, Speedo can confirm that it has terminated the sponsorship of Evgeny Rylov with immediate effect. We condemn the war in Ukraine in the strongest possible way and stand in solidarity with the people of Ukraine, our athletes and our teammates who have been impacted by the conflict.

As part of this decision, any outstanding sponsorship fees will be donated to UNHCR.

Rylov, a four-time Olympic medalist, was one of eight Russian athletes identified at the rally hosted by President Vladimir Putin in Moscow, and appeared on stage wearing his Olympic medals alongside gymnasts and figure skaters.

The athletes wore the nationalist “Z” symbol and were celebrated ahead of Putin making a speech.

The 25-year-old won three medals at the Tokyo 2020 Olympic Games last summer earning a pair of individual golds in the men’s 100 and 200 backstroke while adding a silver in the men’s 4×200 freestyle relay. He also won bronze at the 2016 Olympic Games in Rio in the 200 back.

Rylov is notably a staff sergeant in the Moscow Oblast Police in Lobnya.

During the rally, Putin praised the nation’s “special operation,” referring to the ongoing invasion of Ukraine, and celebrated the 8-year anniversary of Russia annexing the formerly-Ukrainian territory of Crimea. He has also made it illegal for journalists to refer to it as a “war.”

The latest reports from the Office of the UN High Commissioner for Human Rights indicate that more than 900 civilians have died in Ukraine due to the attacks, with the real number expected to be much higher.

Rylov’s presence at the rally has only fuelled swimmers’ calls on FINA to ban Russian athletes from competing in its competitions. FINA has blocked Russian athletes from competing internationally under the flag or symbols from their country, but hasn’t committed to the full ban that many other international sporting federations have instituted. The organization instead committed to evaluating athletes’ and officials’ participation on a case-by-case basis.

FINA has yet to indicate if Rylov’s appearance at the rally will trigger its case-by-case clause. The sport’s international governing body offered the following statement regarding the situation:

FINA is deeply disappointed to note the reports regarding Evgeny Rylov‘s appearance at the Luzhniki Stadium during Friday’s rally. We are investigating the matter further.

In addition to his four Olympic medals, the Novotroitsk native also owns eight medals from the Long Course World Championships, including winning two straight golds in the 200 back in 2017 and 2019. Rylov is also a four-time SC world champion and four-time European champion.

And still, losing a sponsor ain’t much. Consider what the Ukrainian national team is dealing with. Some have fled, some conscripted, some have lost homes and pools and friends and coaches and family. Some likely will be killed.
If all Russian athletes are banned from international competition, they’re still better off than Ukrainian athletes. Sure sports are just one of many collateral damages in war, but limiting that collateral damage to the Ukrainian side of the border is, in effect, supporting Putin’s invasion.

Corporations can end contracts whenever they deem it appropriate for various reasons. That said, regarding the reporting of the war, I think the United States and Russia should have a contest. Take two of the main propaganda arms of each country, and see who can lie the most in 24 hours. Special bonus points goes to the propaganda arm who can tell the best half truth regarding a serious event in the conflict. Fox News and CNN vs. Sputnik News and RT would be appropriate.

Which one is worse… A cannabis user, or supporting unprovoked military invasion to a neighboring country, destroying that country’s infrastructure and public facilities, and killing civilians.

Everyone Six Months Ago: Most Russian athletes are innocent! You can’t ban everyone for the actions of a few! They should be allowed to compete at the Olympics!

Everyone now: Quick! Get the torches! There’s a Russian!

Everyone in America essentially since the McCarthy-era Red Scare: “Are the Russians in the room with you/us right now? Did you hear that?!?!”

Very few since then: “What is really being hidden from average American people every time Russia gets dusted off and rolled out…”

It is the distraction that keeps giving

Better than Putin killing your family, I guess. Great job folks! Keep those pitchforks out! Points up!

With Rylov on this one. Not many wars Russia hath started.

Please define many to you.
5 in 25 years, is that many or not many?

Pork snout. That is what his last name means in Russian. Maybe there was a strong reason why his ancestors were called this way and this particular gene isn’t susceptible to any mutations.