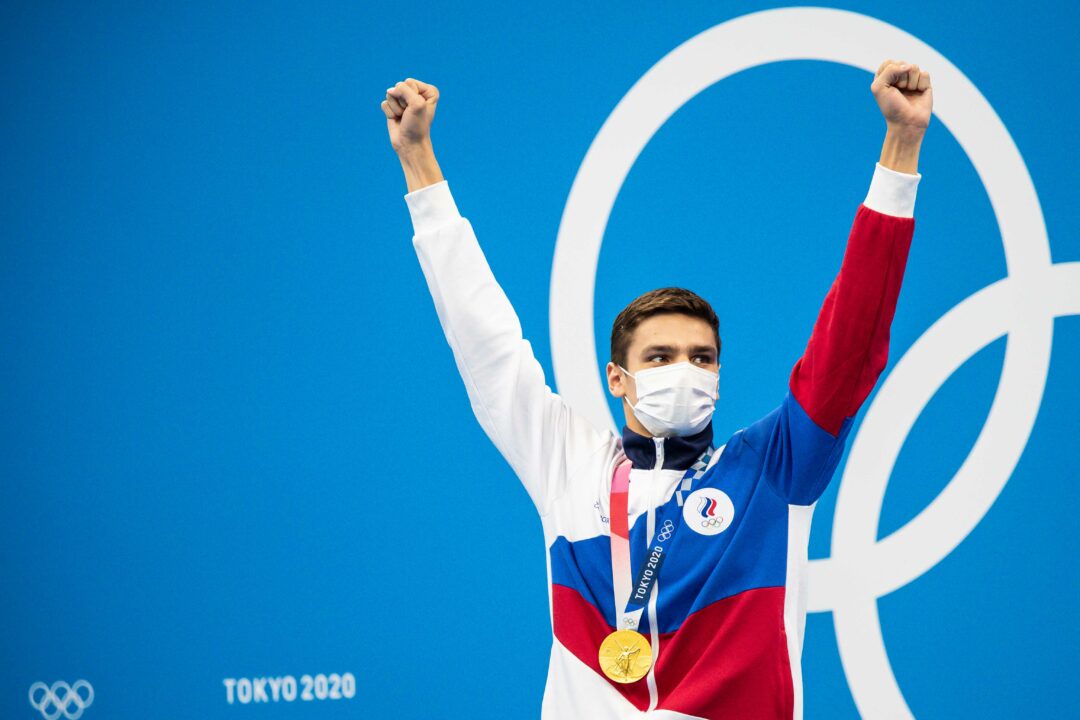 Evgeny Rylov appears at the Tokyo 2020 Olympic Games wearing the attire of the "Russian Olympic Committee." He won 2 golds and 1 silver medal at that meet. Archive photo via Jack Spitser/Spitser Photography

The athletes wore the nationalist “Z” symbol and were celebrated ahead of Putin making a speech.

List of Russian athletes involved in pro-war rally in Moscow:

Rylov, second-from-the-left. The Vladimir Morozov present is the figure skater of the same name, who won a 2022 Olympic silver medal, not the swimmer.

Rylov is a staff sergeant in the Moscow Oblast Police in Lobnya.

In his speech, Putin praised the country’s “special operation” in Ukraine and celebrated the 8 year anniversary of Russia annexing the formerly-Ukrainian territory of Crimea. Putin is describing Russia’s invasion of Ukraine, which has killed at least 816 Ukrainian civilians according to the United Nations, as a “special operation,” and has made it illegal for journalists to refer to it as a “war.”

While FINA has blocked Russian athletes from competing internationally under the flag or symbols of their country, they have stopped short of the full ban that most international sporting organizations have put in place. They instead committed to evaluate athletes’ and officials’ participation on a case-by-case basis.

FINA has acknowledged Rylov’s presence at the rally, but has not yet indicated if it will trigger the organization’s “case-by-case” clause.

FINA provided SwimSwam with a statement regarding the situation:

FINA is deeply disappointed to note the reports regarding Evgeny Rylov‘s appearance at the Luzhniki Stadium during Friday’s rally. We are investigating the matter further.

Both the international gymnastics and international skating federations have banned Russian and Belarusian athletes from competition indefinitely.

Luznhiki Stadium, which was the main stadium of the 1980 Olympic Games, appeared to be filled to its 60,000 seat capacity.

While Russian athletes continue to protest that the war in Ukraine has nothing to do with sports, and that athletes should not be subjected to bans, an increasing body of evidence does tie the war to sport. That includes Ukrainian athletes being unable to travel, Ukrainian sporting facilities, including several important aquatic centers, being hit by Russia bombs and missiles, a Ukrainian national team coach being injured in a missile strike, and now Russian athletes appearing at pro-war rallies. Most elite Ukrainian aquatics athletes have now left the country to train elsewhere, primarily in Germany, Hungary, and Italy, though some have taken up arms in the country’s volunteer militias.

The list of Russian athletes who were on stage at the rally:

Ukrainian World Record-breaking swimmer Andrii Govorov posted on his Instagram story on Saturday that he and Rylov had a good friendship, but criticized him for appearing at the rally, saying “it’s heartbreaking to see him with this ‘Z’ sign on his chest.” Govorov says that Rylov blocked him on Instagram.

Video of the event:

FINA has to impose a blanket ban on Russian athletes. If it’s good enough to impose economic sanctions which really affect ordinary people then it’s good enough to apply bans on elite athletes. If anything, the case for applying sporting sanctions is even stronger because in autocratic countries elite athletes are entirely funded by the state and the state uses the athletes to boost its image.

Russia will not exist in a year. Not just in swimming but in terms of land too

Okay, so now FINA will have to put up or shut up and ban him from Worlds. If they can’t do that, their words are hollow and more countries need to pull out of Worlds. We can make Sette Colli or Mission Viejo a de-facto Worlds and get sponsors to pony up prize money.

Oppressive governments have been overthrown for a long time by brave people all around the world. There just don’t seem to be enough brave people in present day Russia (or China).

My guess is he a solid nationalist and supports the government and leadership. I’m not criticizing it either, just stating a fact.

At the same time, if he opposes this or is questioning the government and if he trains out of Russia, has parents and siblings in Russia, his best bet is to continue to support the government.

Opposing Putin while you are an agent of the government, which as a high-profile athlete he is, will not just result in being banned from representing the country and loss of financial and training subsidy, but jail and seizure of assets.

except that what you are saying is not true. Not to mention he wouldn’t be supporting gay marriage but NOT killing innocent civilians

The presence of the Averina sisters surprised me the least. They are cold and ruthless. Thank goodness the judges stood up for their initial numbers in Tokyo.

Dina Averina is the least forgivable among all of them. Some might be forced, but she’s clearly not, as she spoke in favor of war to Russian media. (And she still thinks she should have won gold in Tokyo!) The sisters also took a lot of pictures happily before and after the rally which can be found on instagram.

Relieved to see Margarita Mamun unfollowed them yesterday. She’s a champion in and out of competition.

Glad it was Vladimir Morozov the figure skater not the swimmer. Of all the Russian swimmers he is the one that needs to distance himself and if possible end association with the Russia.

I don’t know if he became an American citizen.

I saw his name and was heartbroken. Glad I finished the whole article!