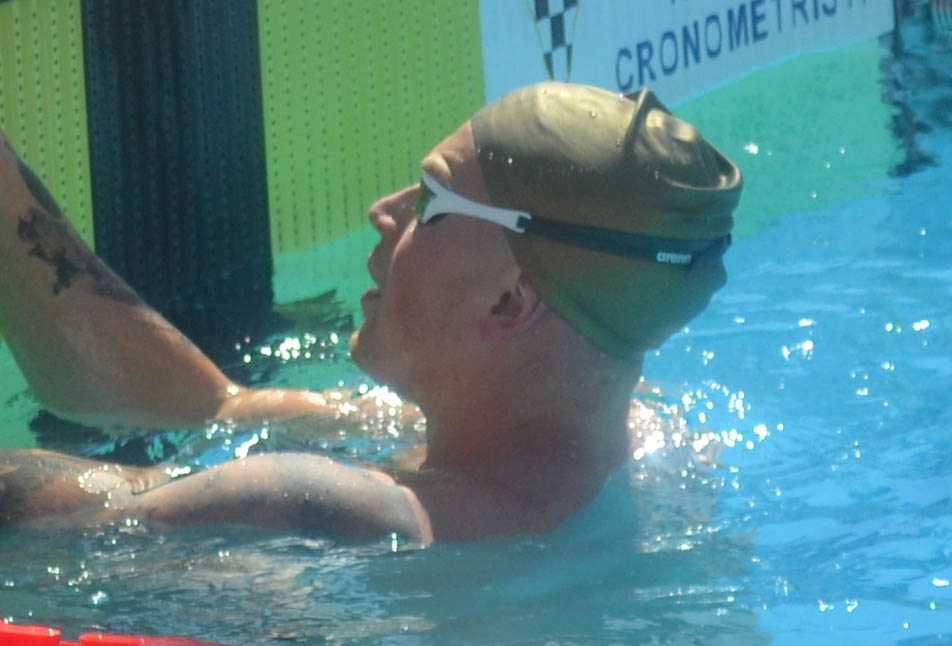 The 2019 Sette Colli Trophy got underway this morning in Rome, Italy, with a plethora of international swimming talent descending upon the Stadio Olimpico Curva Nord pool. Over 500 athletes representing 39 nations are taking part in this 3-day annual meet, several of whom are still hunting World Championships-qualifying times.

The meet serves as a last-chance qualification for both Italy and the Netherlands, for example, so look for swimmers to turn up the heat tonight come the finals session, although the prelims produced some stellar swims already.

We already published how French Olympic champion Florent Manaudou blasted a big-time 21.73 in his first swim back since announcing his return to racing this past March. That time gave Manaudou the 2nd seed in the men’s 50m free behind Brazilian beast Bruno Fratus, who clinched lane 4 in 21.63.

The aforementioned hit the only sub-22 seconds times of the morning, with American Michael Andrew and Italian Santo Condorelli sharing the 3rd seed, each touching in 22.06.

Andrew gave up his spot in the men’s 100m breast to focus on the 50m free after his earlier 50m back performance. In that 50m back, 20-year-old Andrew clocked a new Meet Record of 24.53 en route to taking the top spot beating the next-closest heats swimmer, Simone Sabbioni, handily this morning.

Sabbioni hit a mark of 25.15, but it’s Andrew who will be taking the pole position to keep his winning streak from the Mare Nostrum Tour alive. The U.S National Champion’s season-best is the 24.45 from Monaco.

Along with Manaudou, another Frenchman turned some heads this morning in the form of Mehdy Metella. The 26-year-old fired off his 2nd 51-point 100m fly of just this week, taking the top seed in 51.53. He was already 51.44 on June 18th at the French Open, so the 2018 European Championships silver medalist is on-fire in the event as of late.

But, South African Chad Le Clos is lurking as the 2nd seed in 52.14, while Israeli swimmer Tomer Frankel already logged a new National Record with his 3rd-seeded 52.16. Hungarian teen Kristof Milak also made the final in 52.51, as did Japanese ace Daiya Seto in 52.61.

Danish Olympic champion Pernille Blume looked super solid in the women’s 50m free, hitting the wall first in 24.45, although she had sub-25 second company in the form of Dutch freestyler Femke Heemskerk. Heemskerk notched a morning effort of 24.74, while her teammate, Ranomi Kromowidjojo, was missing from the race.

As we reported, Kromo returned home from the French Open to get over a slight illness.

Hungarian teen Ajna Kesely is well on her way to continuing her Mare Nostrum success, producing a swift 400m free time of 4:08.97 this morning. She already owns the world’s 6th fastest time of the season with the 4:05.12 logged at Hungarian Nationals, and the 2016 Olympian came close to that already with her 4:06.55 registered in Canet.

Kesely may have more to give tonight, although she’ll be without Italian European Champion Simona Quadarella. Quadarella was absent from this morning’s heats; we’re looking into why.

Brit Adam Peaty did his thing in the men’s 100m breast for the top spot, producing a 59.29 effort that looked downright pedestrian for the World Record holder.

He led a charge of 5 sub-minute men, however, with Brazilian Felipe Lima next in line at 59.83 and his teammate Joao Gomes Junior right behind in 59.93.

Dutch national record holder Arno Kamminga will try for a medal tonight in 59.95, while Italian Nicolo Martinenghi hit the wall in 59.96 to also make the final.