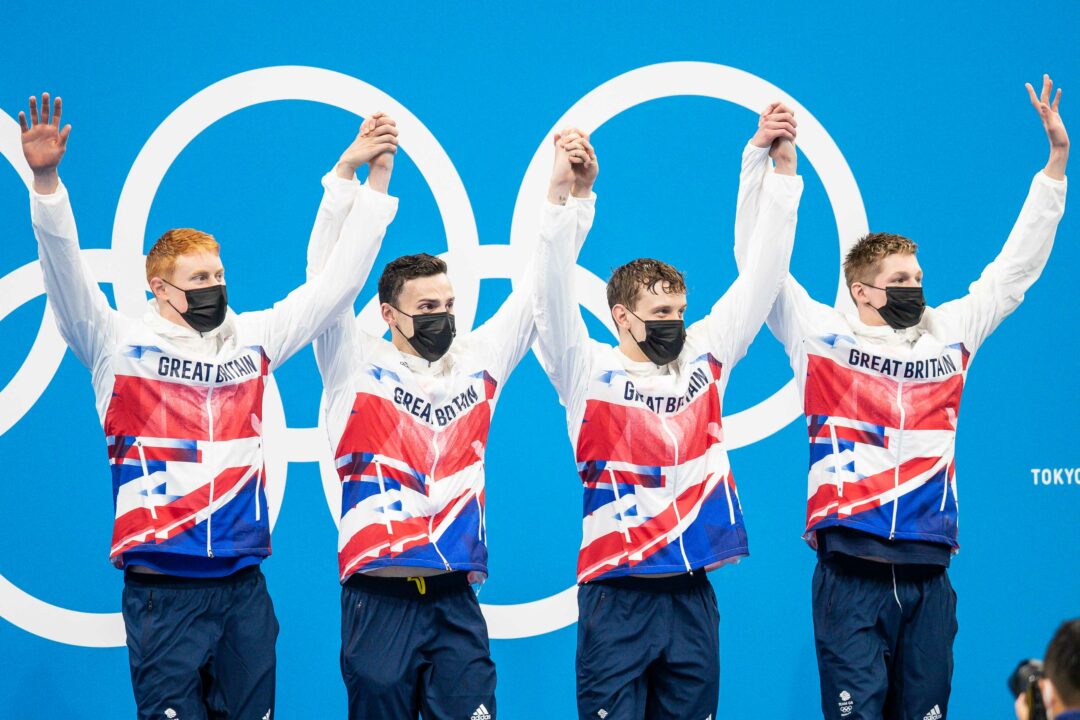 The country's decision not to race in Kazan means the absence of Olympic medalists Peaty, Dean, Scott, Anderson, and Dawson. Current photo via Jack Spitser/Spitser Photography

The recently released psych sheets for the 2021 European Short Course Swimming Championships have revealed who’s in and who’s out for one of the biggest meets in November.

While many countries won’t send all their top swimmers, the most significant takeaway from the entry lists is that no athletes from Great Britain have entered to race at the meet. Great Britain hasn’t announced specifically why they won’t send any swimmers to Euros this year, but their absence will surely be felt in several events.

Britain’s Adam Peaty, whose absence is likely related to his current involvement with UK reality show Strictly Come Dancing, won’t race his signature 50 and 100 breaststrokes. Despite him not being in those races, there will still be considerable competition in the men’s breaststroke events courtesy of Arno Kamminga, Nicolo Martinenghi, Ilya Shymanovich, Marco Koch, Anton McKee, Emre Sakci, among others.

Tom Dean and Duncan Scott will also be missed in the 200 freestyle (an event in which they both medalled in Tokyo), while Scott and Max Litchfield will be among those forgoing a chance at medalling in the IM events.

On the women’s side, Anna Hopkin and Freya Anderson, and Kathleen Dawson would have been among the favorites to medal in the sprint freestyles and backstrokes, respectively, while Molly Renshaw and Abbie Wood would have been contenders in the breaststrokes and IMs.

Despite Great Britain’s opt-out of the meet, Short Course Euros will still feature a number of stars from across the continent, including several of the outstanding performers at the Tokyo 2020 Olympics.

Coming off yet another podium finish at the Olympics, Sarah Sjostrom is entered in 5 events at Euros and will have a shot at adding to her 20-strong medal record at the meet. Sjostrom will race the 50/100 freestyle and butterfly along with the 100 IM as she counts down the days until the upcoming ISL playoffs with Energy Standard.

Kristof Milak was one of Europe’s biggest performers at the Olympic Games in Tokyo, having delivered a heat-crushing swim to top the men’s 200 butterfly along with a powerful swim in the 100 butterfly to snag silver behind Caeleb Dressel. Milak has recently been racing well in the short course pool and could be in store for some more drops and more medals here.

The men’s backstroke entries are topped by Russia’s powerful duo of Kliment Kolesnikov and Evgeny Rylov; both of whom each won 2 individual medals in Tokyo. Kolesnikov is entered as top seed in the 50 and 100 back (and will also race the 50/100 freestyle), while Rylov is #1 in the 200 back.

Kira Toussaint and Margherita Panziera missed the podium this summer in the women’s backstrokes but should be among the favorites at Euros, especially considering the absence of recent breakout stat Kathleen Dawson. Toussaint and Panziera hold the top seeds in the 100 and 200 backstrokes, respectively, but will have to fend off the likes of up-and-coming Ingeborg Loyning of Norway, Maria Kameneva of Russia, and others.

As for the distance events, Olympic medalists Simona Quadarella and Gregorio Paltrinieri will lead the way into their respective 1500 freestyles. Quadarella is actually the top seed in both the 800 and the 1500 while Paltrinieri is #2 in the 800 to Norway’s Henrik Christiansen.

In the 50 butterfly, Szebasztian Szabo has staked his claim for the 50 butterfly title considering that he’s the only sub-22 entrant. Szabo has had a solid season thus far but will be without the majority of his main competitors across the globe right now including Caeleb Dressel, Nicholas Santos, and Kyle Chalmers. He won’t, however, be without a race as former world record holder Oleg Kostin is entered for Russia as second seed in the event with a solid 22.23.

In addition to Great Britain’s absence, there are several other names that don’t appear on the heat sheets for Euros despite their country’s participation. Some of the biggest names we won’t see race are long-standing European giants Florent Manaudou, Katinka Hosszu, and Ranomi Kromowidjojo, in addition to soon-to-retire Federica Pellegrini, and Femke Heemskerk.

The obvious reason for many athletes’ decision not to pursue Short Course Euros is their commitments to race in the upcoming ISL playoffs, which begin shortly after this meet. With too many to name, here’s a look at some of the most notable swimmers who won’t race at Euros along with the events in which they would likely be in contention for a podium finish:

Where is the psych sheet?

Linked at the top.

Have to say i don’t get it… if the top swimmers don’t want to race here for whatever reason, that’s fine, but why not let the next top swimmers race? Could just be the chance they needed to step up. Or might just be the highlight of their careers – so what?

I feel some countries have been so obsessed with medaling on the world stage(s), that if they can’t win they just won’t compete.

David Popovici entered in the 100, 200 and 400 free with his LCM PBs (his first real races in SCM after years, in the last stage of World Cup, in Kazan, which has started today).

It has always confused me that the rest of the world continues racing post Worlds/Olympics but top level swimming in Britain just stops happening for months on end. We have so little racing from September to January compared to neighbours.