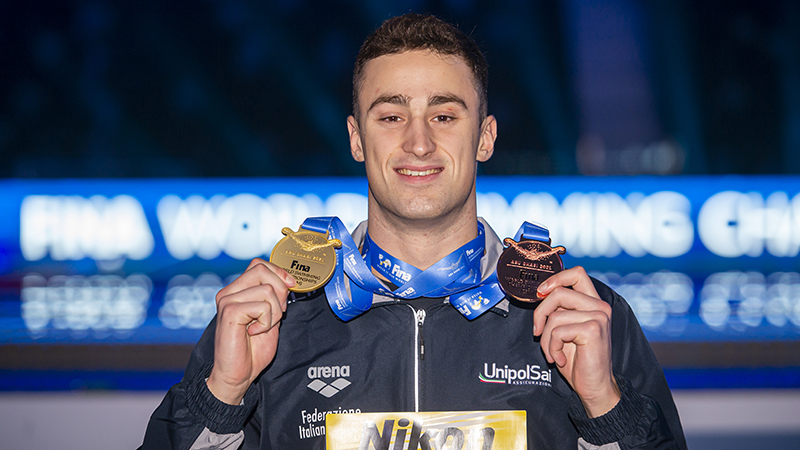 Razzetti won 2/3 of Italy's medals on day 1 of the meet, downing his own national records in both the 200 fly and 200 IM. Archive photo via Giorgio Perottino / Deepbluemedia / Insidefoto

Day 1 of the six-day Short Course World Championship was an electric opening act to the meet. From Siobhan Haughey‘s world record-breaking swim to a down-to-the-wire Seto v Foster IM race to the American and Canadian 4×100 freestyle tie for gold.

Another moment that was a focal point of Day 1 was Alberto Razzetti‘s dominant performance through which he won two medals and broke two Italian National Records just a few races apart.

Razzetti first took to the men’s 200 butterfly, storming to the wall in a 1:49.06. The swim was enough to capture Italy’s first gold medal of the meet and to deny Swiss Olympic medalist Noè Ponti the top spot. Ponti was the runner-up in a 1:49.81, and Chad le Clos took bronze for South Africa in 1:49.84.

Just minutes after collecting his gold medal in the 200 fly, Razzetti got back in the racing pool to swim the 200 IM final. Daiya Seto and Carson Foster ultimately took the top two spots with times of 1:51.15 and 1:51.35, respectively, but Razzetti was in it until the very end and touched in for bronze at 1:51.54.

Razzetti’s swims were both enough to land on the podium and were improvements upon his own Italian records in the events.

Before this season, Razzetti’s fastest time in the 200 IM was 1:55.03 from 2018, and between August 2021 and now, he has been under that mark a total of 12 times. He holds eight of the 10  quickest short course 200 IM times from an Italian in history, while Thomas Ceccon occupies the 4th and 8th place spots.

While this year was a breakthrough for Razzetti in the short course pool, he also fared well in the long course races. Razzetti qualified for his first Olympic team and raced the 200 and 400 IM. He just missed the final in the 200, placing 9th overall with a 1:57.70, but made it to the final in the 400 and wound up 8th with a 4:11.32.

While Razzetti thrives in 2021, he seems to be a part of a bigger picture of a fast-improving Italian national team. Early in 2021, we saw Benedetta Pilato smash Lilly King’s 50 breaststroke long course world record. A few months later, Italy had a historic Olympic performance in Tokyo where they won a total of 6 medals in the pool.

Simona Quadarella took bronze in the 800 freestyle, while Gregorio Paltrinieri took silver, and Nicolo Martinenghi picked up a bronze of his own in the 100 breast. Federico Burdisso added to the pile when he placed third in the men’s 200 butterfly and the Italian men capped it off with a 4×100 freestyle silver and 4×100 medley.

On the heels of their Olympic success, the stars kept on developing as the likes of Michele Lamberti and Simone Cerasuolo got going in the fall. Lamberti raced to 5 medals at the 2021 Short Course Europeans Championships including silver in the 50 backstroke and 100 butterfly, and a bronze in the 200 backstroke. To 50 backstroke was a new Italian record for Lamberti and he also took part in the world record-breaking 4×50 medley for Italy.

Cerasuolo meanwhile recently swam a 25.85 world junior record in the short course 50 breaststroke to improve upon his own mark of 26.26 from earlier this year. At the same meet, we bettered teammate Nicolo Martinenghi‘s 2018 WJR of 57.27 in the 100 breaststroke with a 56.66 of his own.

In the wake of Razzetti’s double-medal haul, it will interesting to see how the rest of the Italians fare and if the nation can hold on to the early top-3 spot in the medal table.