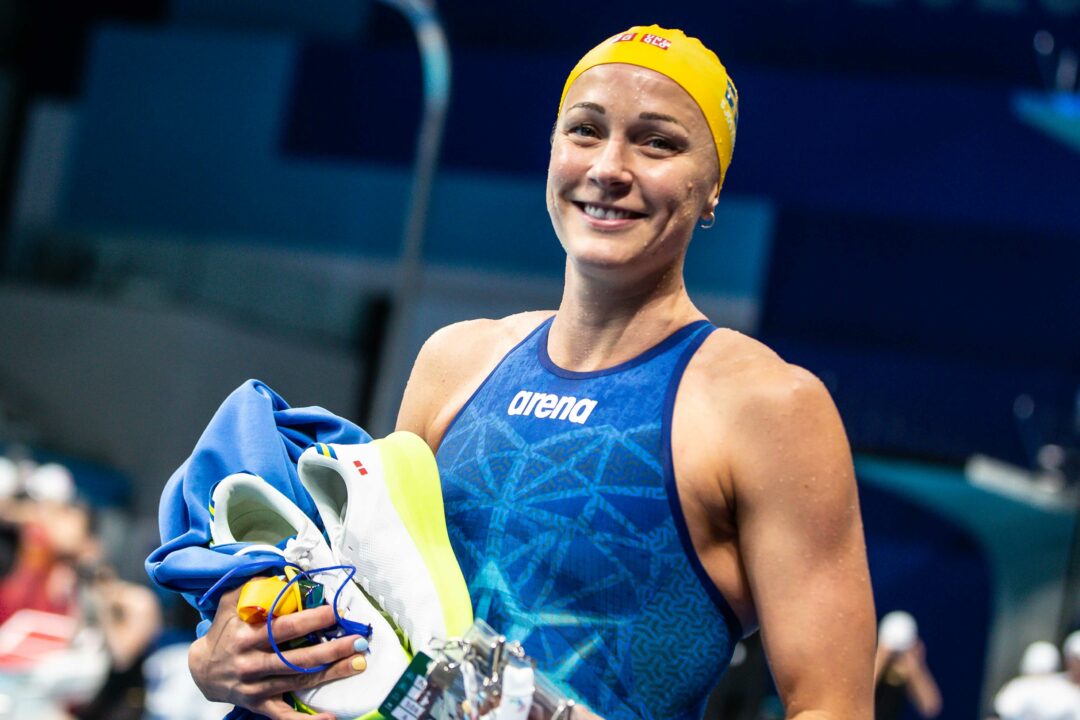 Sweden's Sarah Sjostrom was one of the wow factors from this past week's 2021 European Short Course Championships which concluded in Kazan. Archive photo via Jack Spitser/Spitser Photography

The 2021 European Short Course Championships wrapped up over the weekend from Kazan, Russia, with the host nation once again taking the top of the overall medal table when all was done and dusted. You can refresh yourself on the podium outcome from Kazan here.

In case you missed out on the daily live recaps on SwimSwam, here is our post-meet digest with some of the key swimmers, performances and other items of note gleaned from the 6-day affair.

A championship meet of this caliber wouldn’t be complete without at least one World Record biting the dust but over the course of the competition, we saw 4 such standards met or exceeded.

28-year-old Sarah Sjostrom of Sweden did not compete at the 2019 edition of these European Short Course Championships, so the fact she was here post-elbow surgery to boot rendered her one swimmer in the spotlight.

Earlier this year Sjostrom broke her elbow while slipping on ice in her native Sweden. She underwent surgery, rehabilitation and fought back to not only race but medal at this summer’s Olympic Games in Tokyo, Japan. Sjostrom took home silver in the women’s 50m freestyle there.

Here in Kazan, Sjostrom was a one-woman wrecking ball, collecting a massive haul of 4 individual gold medals. The Olympian scored wins cross the 50m free, 100m free, 50m fly and 100m fly, and bronze in the 100m IM, establishing two new Championship Records in the process. Her time of 23.12 in the 50m free and 24.50 in the 50m fly now enter the books as the fastest ever at this biannual meet.

These 2021 European Short Course Championships marked the first time that two swimmers were able to successfully sweep all of the golds in their respective disciplines.

Dutch ace Kira Toussaint did damage across the 50m, 100m, and 200m backstroke, reaping gold in each of the events, while Russia’s Anastasia Kirpichnikova accomplished a similar feat in freestyle.

Kirpichnikova topped the podiums in the 400m, 800m, and 1500m freestyle events, crushing a championships record of 15:18.30 in the latter, less than half a second off of German Sarah Kohler’s World Record.

There were a remarkable five ties across the races here in Kazan, an unprecedented number for this competition. The identical swims came as follows:

17-year-old David Popovici broke through with a solid performance in the men’s 200m freestyle, topping the podium in a time of 1:42.12.

That not only established a new Romanian national record, but the feat also represented the Olympian’s first-ever senior international gold medal.

entering this meet, Popovici had wreaked havoc across junior meets, including notching 100m free gold at the European Youth Olympic Festival in 2019 followed by a 50m/100m/200m free sweep at this year’s European Junior Swimming Championships.

Popovici remarkably made two Olympic finals in Tokyo but this gold signifies his expanding ability to handle both long course and short course with plenty of years to hone his craft in each.