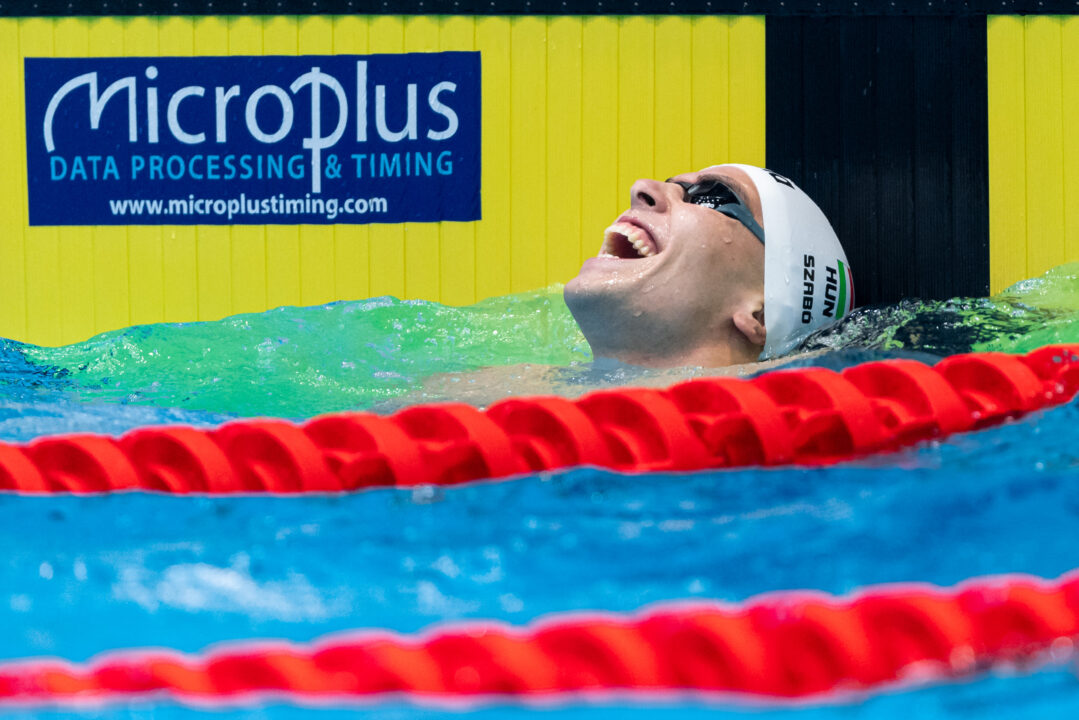 It is curious to see that both of those athletes tied the previous world mark.

In men’s 50m fly Szebasztian Szabo tied the World Record with a time of 21.75. His superb showing equals the world record set by Nicholas Santos in 2018 at the World Cup in Budapest.

It’s really difficult to highlight some big differences in a 50m sprint, especially if you have the same time.

One thing is certain: we have to focus our attention on the minor details.

Anybody who is involved in the profession of video analysis knows that a tolerance of ± 0.03 sec is allowed. This tolerance depends on the video quality and on the accuracy of the references at pool. So, as regards our analysis it is impossible to take into consideration a time difference lower than ± 0.03 sec.

Now, that being said, let’s go deeper and check the data.

In the first 25m there is nothing to report: everything is almost the same.

It goes without saying that they both are fast off the blocks and that the management of the race has been undoubtedly the same. 5.1 at 15m is really fast, but not impossible to equal.

The most impressive data is the time at 25m: nobody else at European Championships or at the 2018 World Cup was able to swim under 10 seconds in the first 25.

The starts are key to this record.

The study of the turn lap shows us the first significant difference.

The data in the last 5m before the wall are not very different, the rotation time is perfectly the same and even the first 5m after the wall are very similar. We can detect some small differences from 30m to 35m and from 35m to 40m.

But just to be clear:  we are really speaking about some minor differences.

There are two interesting points to highlight:

If we check the underwater data of the second 25m, we can see that the measure and speed of the underwater phase is very similar, it means that Szabo was just a bit faster in the breakout and until 15m.

The main point is from 40m to 45m, Szabo is quite a bit faster than Santos. This is the first part where it is possible to see a significant difference. At 45m Szabo swam 19.32 and Santos 19.47.

To understand the reason of the different split from 40m to 45m we need to check the value of stroke rate/stroke tempo and distance per stroke. How we can see from the table Szabo was able to keep a long stroke, 190.5 cm vs 173.5 of Santos

An interesting parameter is the Stroke index, it is a swimming efficiency index. A igher value is more efficient is the swimmer. But… more efficient doesn’t mean faster, it is just a precondition.

We can think the race is done, but in the last 5m something happened, and Santos was able to perform an amazing finish, for Szabo it is the only unperfect point of the race.

Swimming has a fast evolution, The swimming world is caring a lot about the details, or should care. For sure we will see, from these two guys or from someone else some evolution in 50m fly.

I think CD could probably break this record if he ever got serious about doing it, His starts are the best in the world and his underwater aren’t too shabby!