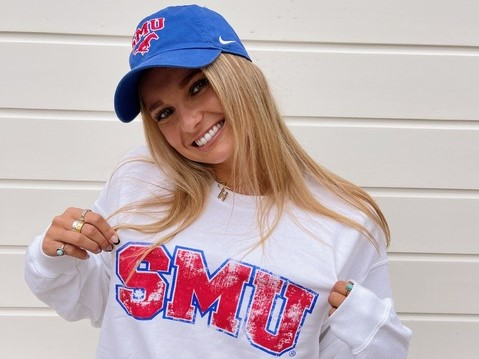 A multiple-time Futures finalist, Hannah Lockyer of the Crow Canyon Sharks has announced her intent to join Southern Methodist University beginning in the fall of 2022. Lockyer is from Danville, California where she attends Monte Vista High School. This season, she was named as her high school team’s captain.

I am so excited to announce NLI signing to  swim and study at Southern Methodist University ! I would like to thank my parents, coaches and teammates for supporting me through me journey. Pony up !!

A versatile swimmer, Lockyer’s best races are the breaststroke and IM events. At the Futures Championships in Santa Clarita, she was a D-finalist in both IM events and the 200 breast. In that breaststroke event, she hit a new lifetime best in the long course pool, racing to a time of 2:43.16 during finals to snag 28th in the event. She also added a 30th place finish in the 200 IM (2:26.22) and 26th place finish in the 400 IM (5:12.38).

With her best times, Lockyer would have been right in the mix with Southern Methodist’s best swimmers in the breast and IM events last season. She would have been the team’s fifth-fastest performer in the 100 breast, 200 breast, and 200 IM, as well as the third fastest on the team in the 400 IM. Her times would have also put her on the edge of qualifying for the A-final at the conference championship meet.

Last season the SMU women came in second at the American Athletic Conference Championships, falling to Houston but topping Cincinnati and Tulane.  While the team graduated it’s top performer in the IM after last season, Jenna Watson, who was an A-finalist at the conference championships in both the 200 breast and 400 IM, will have two years of overlap with Lockyer when she arrives on campus next fall.

SMU announced just last month that they would be further expanding their aquatic facilities, with the plans to begin construction on an outdoor 50-meter pool being released. When the pool is complete, SMU will be one of the only universities in the United States to have both indoor and outdoor Olympic size pools on it’s campus.

The American Athletic Conference is set to undergo a series of changes over the course of Lockyer’s time in the conference. Current conference members Cincinatti and Houston were both announced to be joining the Big-12 Conference by 2025, while FAU, North Texas, and Rice are set to join the AAC after departing Conference USA.

And one more thing…. I believe SMU has had an outdoor 50 meter pool for quite a while (30 to 40 years), their team trained there when it was warm enough while their new indoor 50 meter pool was being built… Just sayin”.

Pretty much as soon as the new nat was built the old 50m pool adjacent to the old nat was deconstructed. The college team trained at that 50m pool after the old nat was torn down and before the new one was completed (3.5 years total)… even when it got to sub-freezing temperatures… under a poorly ventilated tent. Oh memories.

To your point, all of those schools have indoor and outdoor 50m access on their campuses (you can add Illinois to that list as well). But how many, if any, have those pools in the same facility? Or 8 lanes indoor and outdoor? I think that’s SMU’s goal in finishing off their current swim complex.

We kind of went back and forth on this with SMU, and they’re trying really hard to pin it into something totally unique (they eventually just stopped responding), but ultimately, I think it’s a really great facility, but not singularly unique.

I dunno, every time it comes up, lots of people ask questions about it, it’s kind of taking the fun out of it. If I were them, I might try a different tact: putting my program in the SAME sentence as Auburn,… Read more »