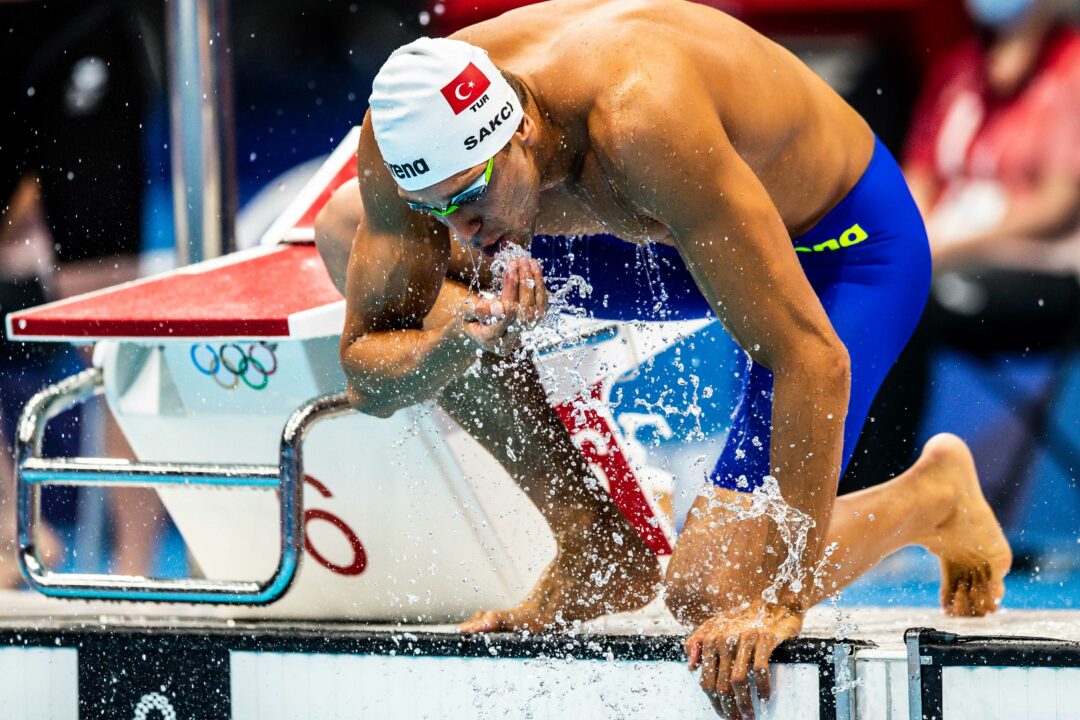 Turkey's Emre Sacki was one of 13 breaststrokers to get disqualified on Thursday morning in Abu Dhabi. Archive photo via Jack Spitser/Spitser Photography

An alarming number of breaststrokers were disqualified during the opening preliminary session of the 2021 FINA World Short Course Championships in Abu Dhabi.

A total of 13 athletes received DQs across the women’s 50 breast and men’s 100 breast, including potential medal threats such as Italian Arianna Castiglioni, Turkey’s Emre Sakci and Brazilian Joao Gomes Junior.

SwimSwam has reached out to FINA to find out if there was something in particular the officials were looking for that resulted in such a high number of disqualifications.

Sakci came into the men’s 100 breast as the third seed, entered with his Turkish National Record of 55.74 set last year in the ISL, while Gomes Junior was entered without an entry time but was expected to factor into the at least the semis, having placed 11th at the 2018 Championships in a PB of 57.26.

In the women’s event, Castiglioni was also the #3 seed with her time of 29.09 from the ISL regular season in September.

Jamaican world record holder Alia Atkinson was the top qualifier into the women’s 50 breast semi-finals in a time of 29.55, while Dutchman Arno Kamminga paced the men’s 100 breast in 56.19. The world record holder in that event, Belarusian Ilya Shymanovich, is a close second in 56.20.

Not a surprise at all. When they failed to call the dolphin kick in the Olympics when it was obvious, they changed the rule allowing a dolphin kick. Not that rule changes are bad, they keep advancing the sport, but they need to be called at the highest level. More and more breast stroke swimmers are looking for ways to challenge what is hard to see by the human official. I won’t go as far to say they are looking to cheat, but understanding the rules and riding the edge of the rule is part of moving the sport forward. Backstroke turns onto the belly, 15 meter rule, surface break with hands on breast, are a few that came about… Read more »

I would like cracking down in this, but I think they should have set this standards at the World Cup meets. If you raced 8 FINA events this year and were ok at the first 7 doing the same thing, I could understand the frustration with suddenly getting called now.

We’ve asked why the timing is now, not Tokyo or the World Cups or anywhere else.

I don’t have much confidence we’ll get a response, but I think it is an important topic for FINA to address.

Historically, Fina is flawed, and this is yet another example. I swam 50 years ago and the rule changes since then led me to believe that it would be impossible these days oi get DQ’d swimming breastroke. I am wrong.
I swam the IM, which, as you know, includes breastroke. I did not get DQ’d but did swim a four and a half minute race and tie the eventual gold medallist to the hundredth of a second. FINA elected to employ a person to oversee the timing equipment. My brother Chris McKee, who coached swimming at Temple University and at Villanova University, met this FINA hired employee after a local competition where this person wad again employed in the… Read more »

Breast stroke as a compulsory exercise. Like ice skating. May as well introduce style points.

Latest published FINA rulebook is from 2017, so not any new rules, just new technology.

Officials: “If they could DQ Lilly King, why can’t we DQ all of them?”

DQ on her last race of her career