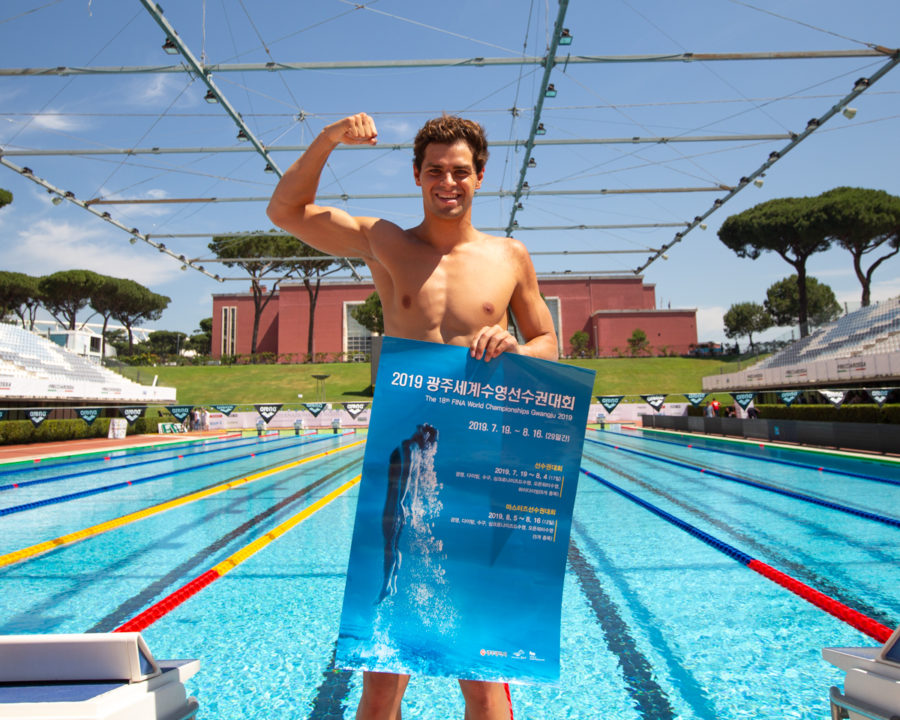 American Michael Andrew dropped the 200 IM to go all-in on the 50 fly on day 3 of the 2019 Sette Colli Trophy in Rome, Italy. Current photo via “Rafael/Domeyko Photography”

The final day of the 2019 Sette Colli Trophy saw some strategic swims from the men and women, setting themselves up for some fireworks to close out the 3-day meet at the Stadio Olimpico Curva Nord in Rome.

American Michael Andrew forewent his spot in the 200m IM prelims to strictly focus on the 50m fly for tonight, with the 20-year-old taking the top seed with a time of 23.41.

Andrew holds a personal best of 22.93 in this event from when he won the U.S. National title last year and has been as quick as 23.11 this season while competing at the FINA Champions Series in Indianapolis.

He’ll need all the speed he can muster to hold off Hungary’s Sebastian Sabo, the man who has dual citizenship with Serbia. Sabo enters this meet with a season-best of 22.99 from Hungarian Nationals, a time that sits #4 in the world.

Additional men’s 50 fly competitors making the final include Poland’s Konrad Czerniak (23.70) and Marcus Schlesinger of Isreal (23.84). South African Olympian Roland Schoeman continues his comeback with a 10th-seeded 24.15, while Dutchman Jesse Puts was one spot shy of the final in 24.09 for 9th.

Italy’s Santo Condorelli and Luca Dotto, along with Frenchman Mehdy Metella did not swim this event.

Italian backstroking ace Margherita Panziera displayed her dominance once again, producing a solid 2:09.00 morning swim to top the 200m field this morning. That field included Hungary’s Iron Lady, Katinka Hosszu, who punched a morning time of 2:11.66 to flank Panziera in the final tonight.

Panziera owns the #1 time in the world with her 2:05.72 notched in Riccione at Italian Nationals, while Hosszu holds the 6th fastest mark with her 2:06.94 from the FINA Champions Series.

Aviv Barzelay of Israel earned a new National Record of 2:12.69 in this morning’s heats to claim the 3rd seed so we’ll see if the teen can shave even more time off and land on the podium in tonight’s main event.

Hosszu clocked a shiny new meet record in the women’s 200m IM, earning lane 4 in a time of 2:09.01. That took a second off of the previous MR of 2:10.01 clocked by Great Britain’s Olympic silver medalist behind Hosszu in Rio, Siobhan-Marie O’Connor, set 2 years ago.

Japan’s Rika Omoto earned the 2nd seed in 2:12.09, setting up a potentially heated duel between her and Hosszu. The pair’s season bests are separated by only .14, with Hosszu sitting atop the rankings throne in 2:08.50, while Omoto’s season-best is 3rd in the world at 2:08.64.

Similar to the men’s 100m free final from last night where 4 Brazilians made the top 8, tonight’s women’s 200m fly will see 4 Hungarians if all swimmers keep the event. Zsuzsanna Jakabos rocked the quickest time of 2:10.53 to land lane 4, with countrywoman Liliana Szilagyi right behind in 2:10.80.

Although she holds the 3rd fastest time in the world in this event with her 2:06.62 from the FINA Champions Series, Hosszu isn’t racing the event here, nor will she contest the 2fly in Gwangju next month. She finished 3rd at Hungarian Nationals, with Szilagyi and Kapas taking the roster spots instead for this event.

The men’s 200m free is a lights-out show waiting to happen for tonight with Brazilian Breno Correia leading the field in a strong morning swim of 1:47.74. He owns a season-best of 1:46.65 from Aprils Brazil Trophy and was a member of the Brazilian 4x200m free World Record-setting relay in China at last year’s Short Course World Championships.

Lurking as the 4th seed is Hungary’s Domink Kozma, hitting 1:48.60, but has proven he’s capable of much more with his season-best 1:45.77 from Hungarian Nats.

Not making the final was Gabriele Detti of Italy, who hit the wall in 1:49.10, while the man who beat him at Italian Nationals this past April, Filippo Megli, also missed the top 8, settling for 15th in 1:49.58. Hungary’s Kristof Milak touched in 1:49.39 for 11th seed, also out of the final, pending scratches.

Italian swimming icon Federica Pellegrini put on a show this morning with a smooth 200m free swim of 1:57.99 to take the top seed ahead of Dutch Olympian Femke Heemskerk. Heemskerk produced 1:58.78, with Brazilian Manuella Lyrio also in the mix with 1:59.06.

MA 100 back win 53.4 impressive considering the back flags were flapping all over the place in the wind

Wondering if you’ve been watching some old Godzilla movies recently.

I like the expansion of descriptive phraseology. Please continue.