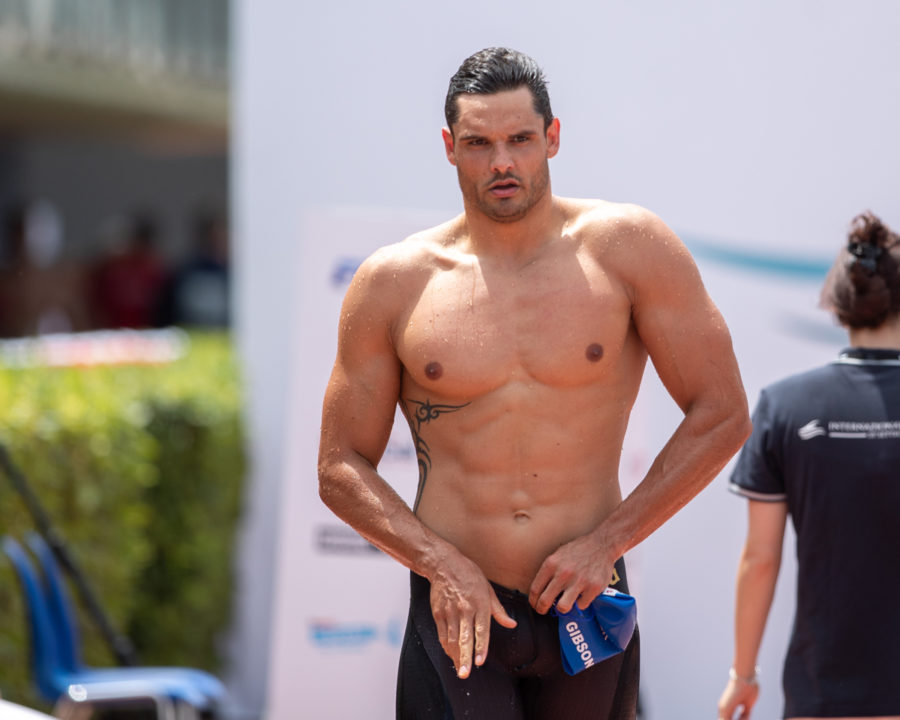 The women’s 50m back saw Brazilian star Etiene Medeiros rock the only sub-28 second time of the final, clocking a 27.64 to stand atop the podium. Her time tonight was just .28 off of the world-leading 27.36 she produced at the Brazil Trophy in April.

28-year-old Medeiros will look to defend her 2017 World Championships title in this event come Gwangju next month.

Behind her was Australian 31-year-old Holly Barratt, who touched in 28.00, while home nation swimmer Silvia Scalia rounded out the top 3 in 28.11.

Barratt’s outing is her quickest on the season, while Scalia hit 27.89 at Italian Nationals.

Of note, Dutch racer Kira Toussaint led out of the prelims, but was disqualified here tonight for exceeding 15m underwater. This is something the 25-year-old former Tennessee Volunteer will need to watch out for in Gwangju, as she’s already been called for this violation this season, twice at that, at the Swim Cup – Eindhoven.

20-year-old Michael Andrew lowered his own Meet Record from this morning with an even quicker time tonight to get gold.

The Race Pace Club American hit the wall in 24.39, a new lifetime best for the U.S. National Champion, overtaking his 24.45 from the Mare Nostrum Tour stop in Monaco. His time also now overtakes Russia’s Kliment Kolesnikov for the #1 spot in the world rankings this season.

Andrew’s time now sits within .15 of the American Record of 24.24 held by Ryan Murphy.

Simone Sabbioni held on to his 2nd place after prelims with the silver here in 24.97, a solid effort since having to bow out of Italian Nationals due to injury.

Sweden’s Gustav Hokfelt wrangled up bronze in 25.23, lowering is own National Record by .03.

The women’s 400m free A-final was a one-woman show, where Hungarian teen Ajna Kesely powered her way to a near-personal best of 4:04.70 for an impressively decisive win.

Entering this meet, Kesely’s career-fastest is the 4:03.57 earned at the European Championships for silver. This year, she already earned a time of 4:05.12 logged at Hungarian Nationals, a time that checked in as the 6th swiftest in the world this season. She was already within range of that with her 4:06.55 logged at the Canet stop of the Mare Nostrum Tour.

Flash forward to tonight, however, and the 17-year-old Olympic crushed a 4:04.70 to establish a new lifetime best and remain in her 6th slot in the world rankings. Kesely is creeping up on the Hungarian National Record, now just over 2 seconds away from the 4:02.37 Boglarka Kapas put on the books in Rio.

The Italian crowd helped guide Gabriele Detti and Matteo Ciampi to a 1-2 finish in the men’s edition of the 400m free, with the 2-time Olympic bronze medalist Detti getting the top spot.

Hitting the wall in 3:45.76, Detti wasn’t too terribly off his 3:43.36 logged for the Italian national title back in Riccione in April.

For 22-year-old European Championships relay medalist Ciampi, tonight’s mark of 3:48.73 gave him the silver in an outing less than half a second off the 3:48.30 he produced also in Riccione.

Danish Olympian and former NC State standout Anton Ipsen got on the board with a time of 3:49.99, within range of his 3:48.22 season-best notched at the Pro Swim Series in Richmond.

Ageless Jessica Vall threw down a solid 1:06.67 to take the Sette Colli meet title tonight, hitting a season-best in the process. She owns the Spanish National Record in the 1:06.44 she established back in 2017, but her fastest this year was just the 1:07.32 put up at the Edinburgh International Swim Meet.

Tonight, Vall’s time came within .23 of that National Record and places her 7th in the world this season.

Italy’s Martina Carraro took silver in 1:07.04, while Swiss Olympian Lisa Mamie brought home the bronze in a new National Record. Her outing of 1:07.42 tonight overtakes her previous lifetime best and NR of 1:07.59 logged just this past March at the Swiss Championships.

Although finishing off the podium, Jhennifer Conceicao continued her hot streak from Mare Nostrum with another South American Record, clocking 1:07.64 for 4th.

Also of note is the fact that 14-year-old Benedetta Pilato fired off a new Italian Junior Record with her B-Final 2nd place finish of 1:08.74. Pilato is the teen that was named to the Italian roster for the senior World Championships in the 50m breast.

We saw 5 men go under a minute in this morning’s 100m breast prelim and tonight was another close battle for the minor medals. British World Record holder Adam Peaty did his thing once again, crushing a routine 58.72 that other swimmers only dream of.

That lowered his field-leading 59.29 from this morning that also looked easy, with the Olympic champion holding the #1 slot in the world rankings with his 57.87 from British Nationals.

Italian teen Nicolo Martinenghi proved again that he is well over his groin injury, clocking 59.30 for 2nd place tonight. That’s his fastest mark of the year, beating out his 59.37 from way back in January, now inserting the Italian into the world’s top 10.

Australian Holly Barratt continued to defy age, hitting a near-personal best in this women’s 50m fly at age 31 after her 50m back silver.

The Rockingham wonder busted out a time of 25.68 to fall just .01 shy of the 25.67 she produced on the Gold Coast for Commonwealth Games silver last year. Her time also is within striking distance of Cate Campbell’s 25.47 Aussie National Record.

Danish swimmer Emilie Beckmann got her hands on the wall in 26.31 for silver, while Italian Ilaria Bianchi also made it onto the podium in 26.38 for bronze.

In a thrilling men’s 100m fly race, South African multi-Olympic medalist Chad Le Clos would not be denied, claiming gold in a monster 51.61. That’s in line with his season-best of 51.25 hit at the FINA Champions Series in Budapest, keeping the South African as #2 in the world.

The Olympic champion Pernille Blume produced her 2nd fastest time of the season tonight en route to 50m freestyle gold, putting up a mighty 24.09. That falls just .01 shy of the 24.08 she logged at the FINA Champions Series in Indianapolis that has her 3rd in the world.

Blume is most definitely back from her heart surgery and is a major player for this 50m free world title in Gwangju.

Femke Heemskerk was just off her 24.67 from the Swim Cup-Eindhoven with her 24.71 here tonight, while Lidon Munoz Del Campo of Spain hit 24.82 for bronze in a new Spanish National Record. She was the first Spanish woman ever under 25 already with her 24.91 in Barcelona.

Barratt raced in her 3rd final of the night, taking the B-Final gold in a time of 24.85, the fastest of her long career. Italian swimming icon Federica Pellegrini took 2nd in the B-Final in 24.92, the 30-year-old’s first time ever sub-25.

Brazilian beast Bruno Fratus didn’t flinch with Frenchman and Olympic champion Florent Manaudou making his first final since announcing his return to the sport this past March.

Fratus laid waste to the field in a massive 21.42, his 2nd fastest of the year behind his 21.31 from Monaco. Fratus’ swim tonight is a statement that he is ready to take on the world in Gwangju.

Manaudou impressed again in his own right, however, logging his 2nd sub-22 second outing in just his first meet back. He was behind Fratus this morning in 21.73 and was .01 faster tonight in 21.72 for silver. That’s a huge start to his return to racing and should put the world’s sprinters on notice that this thoroughbred means business.

USA’s Andrew rounded out the top 3 in 21.94 after his 50m back meet record from the first event of the night.

Coming in hot with the world’s 3rd fastest 1500m free this season was Italy’s own Simona Quadarella, the 19-year-old who smashed a trio of gold medal-winning performances at the 2018 European Championships.

Tonight, Quadarella beat the field by nearly 20 solid seconds to finish in 15:48.84, overtaking her own previous meet record mark of 15:56.81 from last year.

Quadarella’s previous season-best was the 16:04.02 logged at Italian Nationals, but the teen’s performance tonight rockets her from 7th to 3rd, sitting only behind America’s Katie Ledecky and China’s Wang Jianjiahe.

Quadarella’s effort tonight checks-in as her lifetime best, surpassing her previous PB of 15:51.61 that earned her the gold in Glasgow. As such, Quadarella has dipped under the 15:50 threshold for the first time in her young career and is within striking distance of the supersuited 15:44.93 Italian National Record from 2009.

Quadarella is now the 9th fastest performer in history in this event.

Is it just me being sensitive or do I detect some subtle ageism towards the ladies in this article? It’s not like sprinters, even female sprinters, usually drop dead at 30…
Kind of annoying, especially when the guys have some real fossils still swimming world class!

It’s just you being sensitive.

If it’s a case of FINA not ratifying it yet, then they just need to drop this WJR thing because it’s getting stupid…

There are several videos up try Setti Colli swimming

It looked like Adam Peaty had a bad start

I gotta put Bruno as the favorite for 50 free gold. He’s just a machine.

Shoulders are a tough thing to bet on this far out. Otherwise, I’m with you.

I’d say it’s proud based off of last year

Manaudou had quite a few errors in this race, especially his finish looked weird but once he gets all the pieces of the puzzle together over the next year with James, he will be dangerous. Tokyo is going to be a crazy fast race. Someone could swim 21.30 and potentially not be on the podium.

At least one of Proud, Dressel, Fratus, and Manaudou will not medal, crazy

Unless two tie for bronze.

You could say “no problems” or something nicer instead of “OK”.