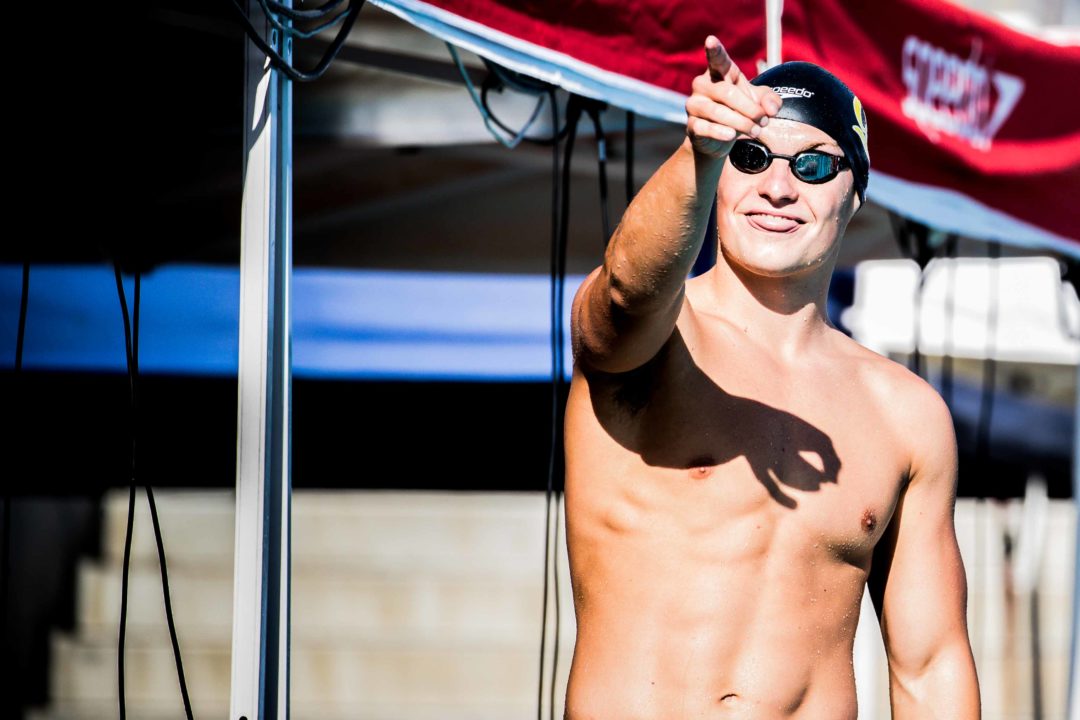 College dual meet season is over, but Cal and Stanford partook in an electric battle with some big times on Saturday in Berkeley. Archive photo via Jack Spitser/Spitser Photography

While in most sports, Cal and Stanford are arch-rivals, in swimming, that rivalry takes on a lot of familiarity, especially given that the coach of the defending women’s NCAA Championship team, Stanford’s Greg Meehan, used to be the assistant coach of the defending men’s NCAA Championship team, Cal & Dave Durden. In fact, the bond is so close that the two will be the US Olympic team head coaches in 2020, and their families frequently stay together at international meets.

The two schools got together for a dual meet on Saturday in Berkeley, racing under their official club team monikers for the sake of including post-grads and pros in the competition.

It was an unpublicized, low-key affair that still managed to produce a lot of really fast times.

Among the highlights from the Olympians was a pair of swims from Katie Ledecky that were faster than any other American not named Katie Lededcky has been this season. In the 200 free, she swam a 1:55.89 to out-duel fellow Olympic champion Simone Manuel, who was 2nd in 1:57.61. Ledecky’s season-best in that event is a 1:55.32 from Winter Nationals in December.

Later in the session, Ledecky swam a 4:01.57 in the 400 free. Globally, only Ariarne Titmus of Australia has been faster this season (3:59.35); Ledecky remains the world leader with a 3:59.28 from the Santa Clara International earlier this month.

Another highlight of the day was a pair of wins from Nathan Adrian, who swam his fastest times since returning from treatment for testicular cancer earlier this month. On Saturday, he swam 22.17 in the 50 free and 48.50 in the 100 free. That’s compared to times of 22.22 and 49.31 at his other post-surgery meet in Bloomington a month ago. Adrian appears to still be on track for his 400 free relay swim at the World Championships later this summer in spite of the lost training time.

Ryan Murphy, the defending Olympic Champion in the event, won the 200 back in 1:55.77. After a 1:57 in Richmond in April, Murphy’s times have been steadily improving this season, culminating with this swim: a new season-best for him by 4-tenths of a second.

Other Highlights of the Meet:

Are we allowed to worry about Levant on that prelims relay?

there will need 2 solid legs if he does not bring down at least a 1.46

No worry not many teams will go sub 7:07 7:08 prelims to become something for you to worry

Is he for a sure a go for Worlds?

Murphy did not lose to Pebley in Richmond in April, he lost to him at Champions Series in June

Nice coverage though, regardless, TY

Typo? Daniel Roy doing 1:01.16 is faster than 1:10.14? “Roy swam 1:01.16 while Whitley went 1:01.33. That’s a lifetime best for Roy – his previous fastest was actually a week ago in Clovis when he swam 1:01.14.” Please confirm, thanks. Also, curious as to why Andrew Seliskar’s information is in the “other highlights” section & not in the main body of the article since he is the named headliner that drew me in.

Not a shabby between two teams!

Whoa, Adrian is back and Seli is suddenly a contender in the 100 fly and sadly Hoffer still can’t swim long course.

Hoffer is a big time taper swimmer and won’t be tapering until much later in than season than the Worlds team. I wouldn’t count him out just yet.

Historically yes, but he will need a crazy taper to throw down anything noteworthy (I’d say sub 48.5).