Schooling wins Battle vs. Conger with 44.7 100 Fly at Texas Invite 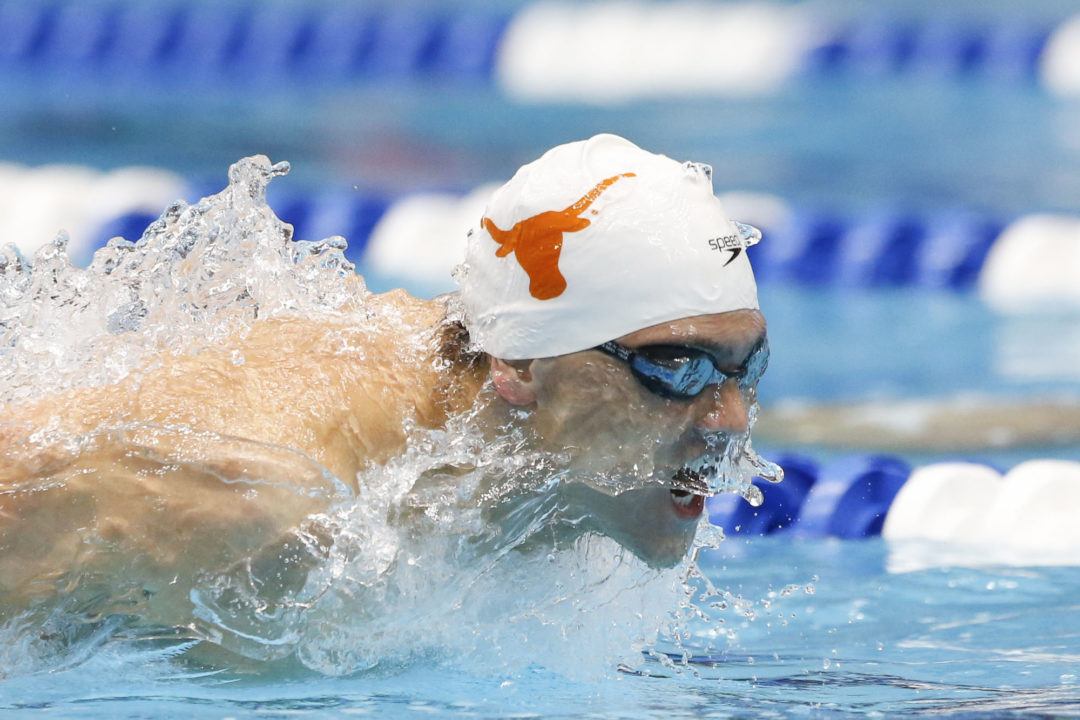 Swimming fans got to witness another butterfly battle between Joseph Schooling and Jack Conger in Friday night’s 100 fly final. Schooling jumped out to the early lead, outsplitting Conger 20.84 to 21.11 at the halfway point. He held steady through the back half, never letting Conger run him down as he won in an NCAA ‘A’ cut time of 44.78 over Conger’s 45.32. Swimming under the 2017 NCAA invite time to round out the top 5 were Arizona State’s Andrew Porter (45.75), Stanford’s Andrew Liang (45.87), and USC’s Dylan Carter (45.99). Just hundredths shy of that mark was Stanford’s Brad Zdroik (46.13).

Arizona’s Nick Thorne dropped over half a second from his best time to dominate the 400 IM in 3:41.47. Both Thorne and Texas’ Sam Stewart (3:43.44) were well under what it took to make NCAAs last season. Stanford’s Abrahm DeVine (3:44.75) was a couple of tenths below that mark tonight, but even if he were on the bubble here he would be safely qualified thanks to his 200 IM yesterday. Freshman teammate Alex Liang is now within a few tenths of last season’s national invite time after he dropped over a second today to finish 4th in 3:45.32.

Texas postgrads Andrew Wilson and Will Licon battled it out in the 100 breast. Wilson edged out Licon with his front half speed, holding off Licon into the finish to win in 52.03 to Licon’s 52.20. Stanford’s Matt Anderson was the only other man to break 53 seconds. Anderson’s 52.92 was just a few tenths shy of the 2017 NCAA invite time.

Another postgrad win came in the 100 back, where Arizona-based Matt Grevers, an Olympic backstroke champion, blasted a 44.92 for the win. A tight battle for 2nd saw Arizona State’s Zachary Poti and Texas freshman standout Austin Katz tied in 21.93 at the halfway point, but Poti was abe to clip Katz at the finish in 45.43 to Katz’s 45.48. Today was Poti’s first time breaking 46 seconds, and he dropped nearly a second off his best time before the meet. Both Poti and Katz should safely make NCAAs. USC’s Carter was under the 2017 NCAA invite time with his 46.05, while Harvard’s Farris was just hundredths shy of the mark in 46.32. Both men were on the back end of a double.

The Longhorns brought home an NCAA ‘A’ cut in the 200 medley relay to close the session, winning in 1:24.28. John Shebat got the ball rolling with a 21.78 back split before Schooling dove in for the breast leg and split a quick 23.54. Tate Jackson took control of the fly leg in 20.53, while Brett Ringgold closed in a blistering 18.43 to secure the win. Notably, Katz was a bit faster on the back split than Shebat, leading off the B relay in 21.44. The Sun Devils were just shy of joining Texas with an NCAA ‘A’ cut as they came within a few tenths of the mark in 1:25.09. Poti gave them the fastest back split of the field with his 21.26 leadoff.

Wisconsin’s Beata Nelson had a big swim in the 100 back. Before today, she hadn’t swum her best time since 2014. She first lowered it in prelims, but dropped nearly a second off her former best when she turned in an NCAA ‘A’ cut time of 50.79 in the final. Likely qualifying for NCAAs alongside her tonight based on last season’s invite time was Texas’ Claire Adams (51.61). USC’s Hannah Weiss (52.84) and Wisconsin’s Jess Unicomb (52.97) were within a few tenths of the mark.

Whatever Wisconsin Women’s back and fly groups are doing/eating, I seriously want to know. So many best times by a lot these last few days.

I heard they are crushing yeti’s with Neil Caskey.

In one year the standard in the 200 yard free is way hogher then it once was. Once Townley unleashed that 1:30 it seems as he awoke somethimg in the college swimmimg world. Now he’s mustered a 1:32.40 in December, which isn’t even the best college swim this year. I’m scared though, as correct me if I’m wrong, but he only went a 4:14 in the 500m, meaning isn’t close to top shape yet. This might be the greatest NCAA championship ever. We are going to have tons of fast swimmers redifine the record books, Texas has been neutered, so the race for the the team championship is gping to be really intense between them, Cal, and likely NC state… Read more »

Who is Andrew Wilson?

Former DIII national champion in the breastroke, swam for Emory, trains with the Texas Longhorns now (has been doing so every summer)

My notes after prelims today:

Texas is not (that) rested for this meet; Roberts died badly in 400IM

Austin Katz is a star in making

Texas breaststroke is in real trouble

Texas’ Evie Pfeifer will be a star

Pomajevich is a high energy swimmer

JohnThomas Larson will not be a flier

Claire Adams is so much fun to watch

Austin Katz is already a star!!!