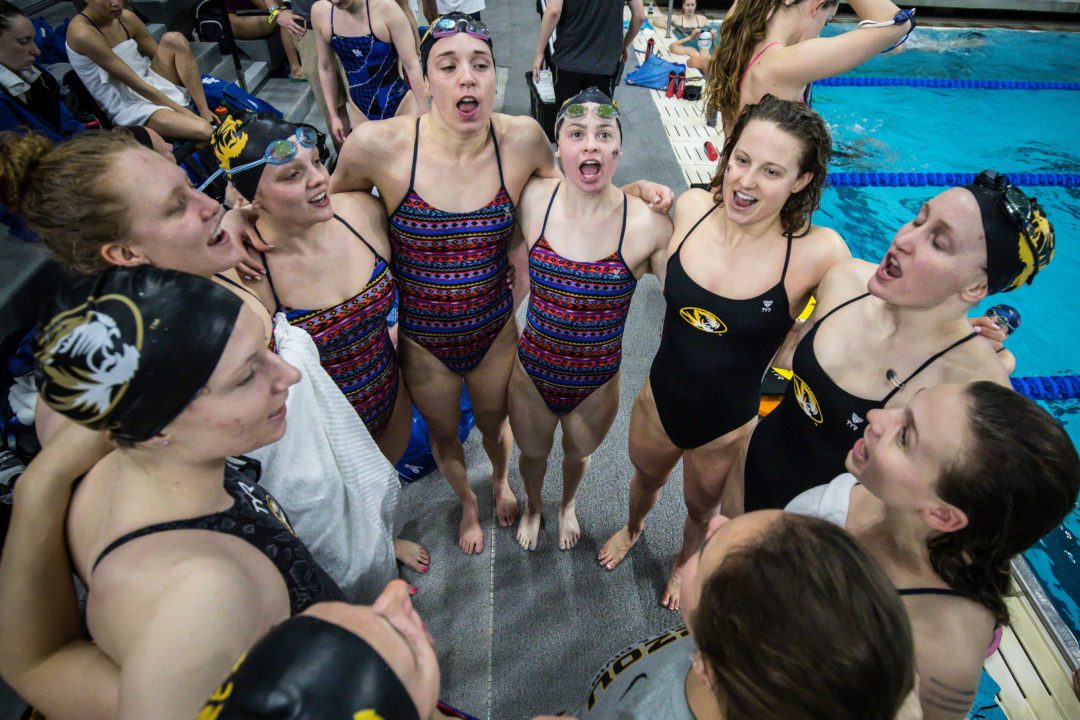 One of the best swims of the meet came when Mizzou's Sarah Thompson split 21.82 on the 3rd leg of Mizzou's women's 200 free relay B team. Stock photo via Jack Spitser/Spitser Photography

The Mizzou Tigers hosted Southern Illinois for their final regular season meet of the year, coming out on top in both the men’s and women’s meets.

One of the best swims of the meet came when Mizzou’s Sarah Thompson split 21.82 on the 3rd leg of Mizzou’s women’s 200 free relay B team. She also swam a blistering 22.31 on the fly leg of a Mizzou 200 medley relay, although the relay was ultimately disqualified. Haley Hynes led that relay off in a very fast 23.93. Thompson also swam a lifetime best of 1:48.64 in the 200 free, swimming the fastest time in the field, but ultimately she raced exhibition (not for points). Teammate Samantha Porter ended up officially taking the win with a 1:48.67, running down and very nearly overtaking Thompson on the back half of the race. In the 200 back, Thompson swam a 1:56.86 for 3rd, going out hard in 55.79 at the 100 mark. Mizzou’s Jennifer King won that race with a 1:55.88, and teammate Amanda Smith was 2nd in 1:56.49.

COLUMBIA, Mo. – The No. 6/20 Mizzou men’s and women’s swimming and diving teams concluded the regular season with a sweep over Southern Illinois on Friday afternoon at the Mizzou Aquatic Center. The Tiger men defeated the Salukis 188-111, while the women notched a 174-111 victory.

In the women’s 200 free, junior Sarah Thompson (Collierville, Tenn.) won the race with a personal-best time of 1:48.64 for her team-leading ninth win of the season.

Mizzou Head Coach Andrew Grevers
“I thought the Tigers did an incredible job with Zou Style today. We’ve been working hard with our mental performance coach to help evolve Zou Style and fine tune it as we prepare for championship season. Each and every athlete did an incredible job of taking care of their business. We had a lot of people dealing with illness step up and swim hard. Each and every one of our seniors performed well today. They showed the team exactly what it means to be a Missouri Tiger and left it all in the water. I couldn’t be happier with our final dual of the season. We’re excited to prepare for SECs and show the SEC what Zou Style is.”

The Tigers are idle until the 2020 Southeastern Conference Championships, held Feb. 18-22 at the James E. Martin Aquatic Center on the campus of Auburn University.

Columbia, Mo. — Saluki swimming and diving broke two school records against the No. 6/20 Missouri men’s and women’s program on Friday afternoon at the Mizzou Aquatic Center. The women’s squad lost, 174-111, and the Saluki men fell 180-111.

“Any time you set a school record in-season when swimmers and divers aren’t rested is special,” head coach Geoff Hanson said. “They were lifting at their heaviest all week and it shows all the hard work they have put in. Adam Cernek barely a missed a school record as well. What they showed today is a great sign of things to come.”

* Women’s team
Lucia Romero swam to a pair of record-breaking performances in her third-career meet as a Saluki. The freshman shattered the school-record in the 100-yard backstroke with a mark of 54.64. The time bested former Saluki Sarah James’ mark of 55.24 set during the 2016-17 season. Romero swam the opening leg in the women’s 200-yard medley relay, which placed second with an SIU-record time of 1:42.70. Sarah Vogt, Rita Naude and Sierra Forbord swam the remaining three legs.

Rita Naude also came away with a victory, as she topped the podium in the 100-yard butterfly with a personal-best time of 54.89.

In diving, Kai Hoffmann-Dussome tabbed a pair of top-three finishes. The senior placed second in the one-meter (286.95) and third in the three-meter (306.23).

Your photo is of Annie Ochitwa

Should be very interesting to see what they do at Championships after competing in tech suits all year.