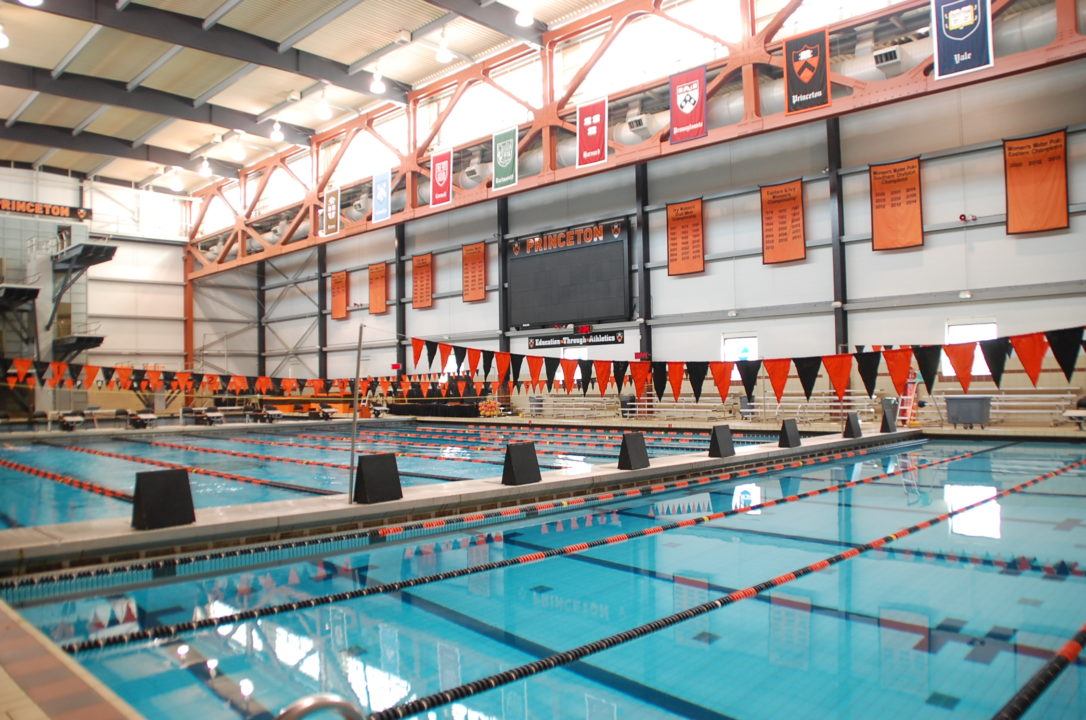 HARVARD VS. PRINCETON VS. YALE

The Tigers’ Nikki Venema broke 49 for the first time to win the 100 free. Her 48.61 was a new best time by over half a second and the 2nd fastest time in Princeton’s record books. Teammate Ellie Marquardt dropped almost a full second in the 200 IM, leading from start to finish in 2:00.23.

Yale’s Ashley Loomis and Cate Sawkins helped the Bulldogs to their win over Harvard with a win each. Loomis clipped a tenth from her best in the 500 free, leading the way in 4:47.80. Sawkins took a second off her best in the 200 back. She trailed Harvard’s Felicia Pasadyn (1:57.85) at the halfway flip, but pushed ahead on the 3rd 50 as she won the race in 1:57.02.

After setting a school record in the 100 breast on day 1, Harvard’s Jaycee Yegher picked up a win on day 2. Yegher was 3rd at the halfway mark and moved ahead of the leaders as they fell off the pace on the 3rd 50. Princeton’s Janet Zhao (2:13.09), who was nearly 2 seconds behind on the front half, made a big charge on the 3rd 50 to close the gap. Yegher held her off at the finish, posting a 2:12.91 for the win. That’s her 2nd fastest time ever and the fastest she’s swum since the 2018 H-Y-P meet.

PRINCETON, N.J. – The No. 22 Princeton University women’s swimming & diving team put itself in a position to claim victories over Harvard Univesity and Yale University Saturday then closed the deal Sunday, prevailing over both the Crimson and Bulldogs inside DeNunzio Pool.

Much like the opening day of the meet, the second day also featured several highlights. Freshman Nicole Venema won the 100 freestyle with a time of 48.61, an NCAA B cut and the second-fastest time in Princeton history. Ellie Marquardt also earned a win in the 200 IM, posting a time of 2:00.23 seconds, the eighth-fastest time in school history.

On the 1-meter board, Sophia Peifer finished second with a score of 284.25 and Sine Scribbick finished fourth after scoring a 279.70.

Up Next
The Tigers will compete at the Ivy League Championships in Providence, Rhode Island, from Wednesday, February 19 until Saturday, February 22.

PRINCETON, N.J. – The Yale women’s swimming in diving team wrapped up the annual HYP meet on Sunday. The Bulldogs beat Harvard 195-105 and lost to No. 22 Princeton by an almost identical score of 194-106. It is Yale’s first regular-season, dual-meet loss since Jan. 15, 2016, at Penn State and first Ivy League loss since the 2015 HYP.

Despite the loss against Princeton, the Bulldogs put together a successful day of swimming and had many top-three finishers. Sophomore Ashley Loomis once again led the Bulldogs in the distance freestyle event, winning the 500-yard freestyle by more than a full second (4:47.80). Junior Cate Sawkins also won her event, the 200-yard backstroke (1:57.02). Sophomore Raime Jones finished just a couple seconds behind Sawkins, placing third overall (1:58.94).

Junior Caitlin Tycz followed up her strong performance in the 200-yard butterfly with another great swim in the 100-yard butterfly. Tycz placed second in the event, touching in 53.72 seconds.

Yale took home the top spot in the 1-meter dive on Sunday. After finishing sixth in the 3-meter dive on Saturday, Nikki Watters scored 294.40 points and placed first in Sunday’s diving event.

The Bulldogs finish with an 8-1 record on the season. They will now prepare for the Ivy League Championships, which begin on Feb. 19.

After breaking the 100-yard breaststroke on the first night, junior Jaycee Yegher posted a season-best time in the 200-yard breaststroke on day two. Touching the wall with a time of 2:12.91, she eclipsed the Crimson’s previous best – which she held – and claimed first place. In addition, it is also good for third amongst program leaders.

Overall the Crimson fell to its Ivy League rivals, Yale and Princeton by scores of 195-105 and 213-87, respectively.

• First-year Felicia Pasadyn recorded the Crimson’s third-best time of the season in the 200-yard IM, clocking in with a time of 2:02.18 to place fourth in the event.

• Pasadyn also registered a second-place finish in the 200-yard backstroke, touching the wall with a time of 1:57.85 – .83 seconds shy of first.

• Fellow first-year Kate Hazlett was not fair behind Pasadyn in the 200-yard back, placing fourth with a time of 1:59.81.

Next Up
Harvard will prepare to defend its Ivy League title when it returns to the Princeton, N.J. for the Ivy League Championship on Feb. 19-22.