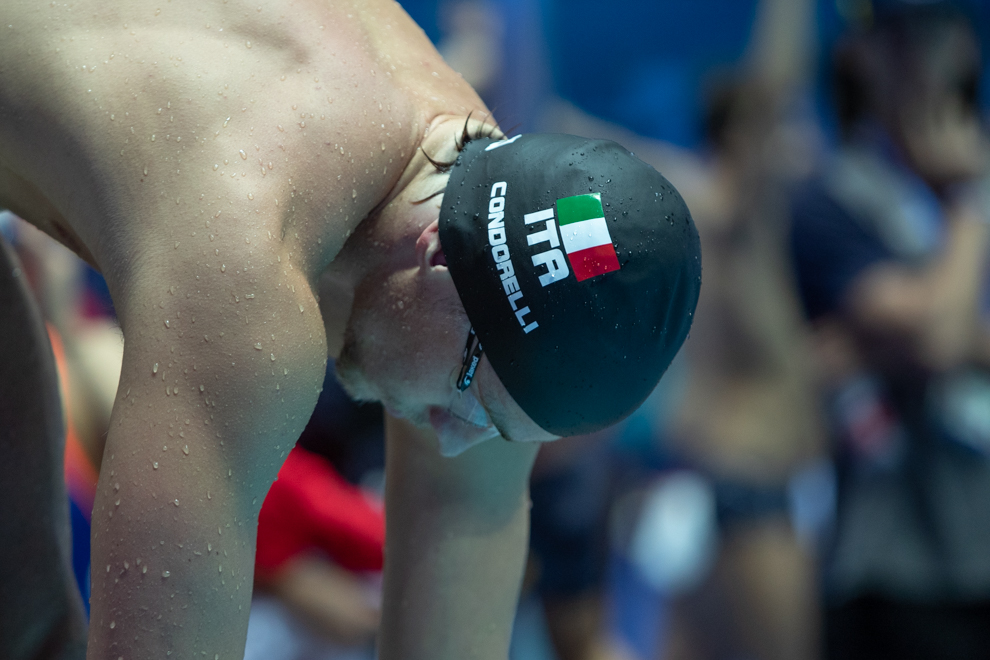 Condorelli is entered in the 50 freestyle at Mt Hood Sectionals. Also set to compete this weekend are Katharine Berkoff, Coleman Stewart, and Max McHugh. Archive photo via “Rafael/Domeyko Photography”

Some of the top swimmers in each region will travel to their local sectional meet. The meets typically feature mostly age group/club swimmers but occasionally are attended by college swimmers. Here we will highlight the five Sectional meets scheduled for this upcoming weekend.

Arkansas soon-to-be fifth-year and 2022 NCAA qualifier Kobie Melton is the second seed in the 50 and 100 freestyle as well as the 50 and 100 backstroke.

On the women’s side, NCAA finalists in the 1650 freestyle Lola Mull of Northwestern and Maya Geringer of Ohio State are set to battle it out in the 800 freestyle here.

On the sprint side for the women, three out of four of Ohio State’s 200 medley relay that set a Big Ten record this past season are set to be in attendance. The three women, Hannah Bach, Kit Kat Zenick, and Teresa Ivan are all scheduled to swim four events each.

Most of NC State will be in attendance in Cary, NC. Highlighting that roster is Katharine Berkoff who recently won silver for the US in the 50 backstroke at 2022 Worlds. Berkoff will not be competing in the 50 back here, instead opting for the 50 and 100 free as well as 100 back.

Stanford commit (2022) Charlotte Hook also highlights the psych sheets. Hook was third in the 200 fly at 2022 US International Team Trials. She is set to compete in the event here as well as the 100 fly and 200 free.

Notably absent from the meet is Claire Curzan. This is Curzan’s home pool but like Berkoff, she was recently at 2022 Worlds.

Highlighting the Mount Hood meet is Italy’s Santo Condorelli. Condorelli is entered on the psych sheets in the 50 freestyle. Condorelli competed in the event in the 2020 Tokyo Olympics for Italy finishing in a 22.14 for 19th.

Also highlighting the psych sheets is Kennedy Noble. Noble was sixth at the US International Trials in April in the 200 backstroke which she is set to compete in here as well. In addition, Noble is also entered in the 100 back, 200 IM, 100 free, and 100 and 200 fly.

Highlighting the psych sheet for Minneapolis is US National Teamer and 2022 NCAA Champion Max McHugh. McHugh is entered in the 100 and 200 breaststrokes as well as 50 freestyle here. McHugh did not compete in US International Team Trials in May, but was seventh in the 100 breast at last year’s Wave II Trials. McHugh’s teammates from Minnesota will also be in attendance.

Highlighting the club swimmers in attendance is the quartet of swimmers from Elmbrook Swim Club. Maggie Wanezek, Lucy Thomas, Campbell Stoll, and Abby Wanezek set multiple relay NAG records back in March. All four are set to be in attendance here entered in a combined 27 events.

Does Santo still display his middle finger behind the blocks? It has been years since I last heard of his routine. I hope he has grown up

I wonder what country he will swim for in Paris

I wonder how Santo’s Italian fluency is coming along?

Italian men are getting too fast, he’ll need to find another country. Is Bahrain still paying for athletes?

Is there a winter sectionals?

Southern California will usually have a Sectional meet in the winter.

It’s all about whether Santo goes with the full or the mock turtleneck look in Paris.

How do you define ‘clickbait’?

Santo should get a percentage of the ad money for the clicks!

Clickbate? More like tweeting Virginia at UV Arlington will be joining the south eastern conference!

Hayes is from Oklahoma, so he is returning to generally his home region but not home state

They were so close yet so far 😜