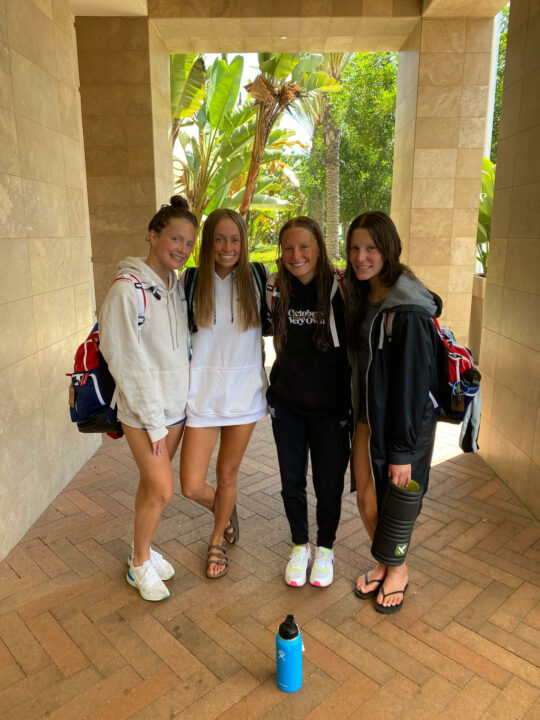 Notably, this same Elmbrook Swim Club team broke the 15-18 NAG for the LCM 200 medley relay this past summer at the Speedo Summer Championships.  Stock photo via Tom Wanezek

The Elmbrook Swim Club squad of Maggie Wanezek, Lucy Thomas, Campbell Stoll, and Abby Wanezek teamed up to break the 15-18 girls NAG in the 200 medley relay tonight in Orlando. The squad also broke their own NCSA meet record of 1:37.74, which they swam last year.

Impressively, Elmbrook was posted the fastest split in the field on each of the strokes. Maggie Wanezek led off in 24.26, with Thomas splitting 26.89 on breast, Stoll 23.47 on fly, and Abby Wanezek anchoring in 22.15. Maggie’s swim was just 0.05 seconds off her personal best of 24.21, which she swam last month. Notably, Thomas swam faster on the relay than she did to win the individual 50 breast earlier in the session (27.25).

The swim breaks the 15-18 NAG, which was held by Nashville Aquatic Club. The NAC squad was star-studded, featuring both of the Walsh sisters, Ella Nelson, and Jordan Hurt. Here is a split comparison between Elmbrook Swim Club’s relay tonight, and NAC’s relay from 2019.

EBSC was better than NAC on the middle of the race. Lucy Thomas was 1.10 seconds faster than Ella Nelson on breaststroke, and Campbell Stoll was 0.69 faster on fly than Jordan Hurt.

Notably, this same Elmbrook Swim Club team broke the 15-18 NAG for the LCM 200 medley relay this past summer at the Speedo Summer Championships.

This is an incredibly impressive record… Is this the closest a NAG has gotten to a NCAA invite time?

No. All of the 17-18 individual records would be invited to NCAAs, comfortably.

Unless you mean relays, in which case yes, it’s the closest any current record is.