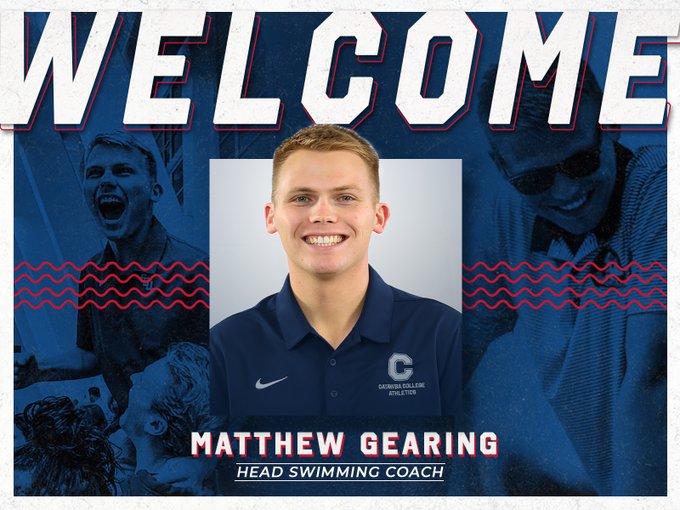 SALISBURY, N.C. – Catawba College Director of Athletics, Michelle Caddigan, announced the hiring of Matthew Gearing as the next Head Men’s and Women’s Swimming Coach on Tuesday.

“Coach Gearing is a rising star in the swimming world and has come to us highly recommended by some of the most prestigious swim coaches in the nation,” said Caddigan.

“He is committed to excellence in the classroom, pool and in life and we look forward to watching him propel our program to new heights. We are ecstatic to welcome him to the Catawba College Family.”

“From the very first conversation with new Athletic Director, Michelle Caddigan, I could feel the passion she had for Catawba,” said Gearing. “She shared her vision and goals for the program, and ultimately what is possible for this athletic department, and I knew immediately that it was something I wanted to be a part of. I’m grateful for her trust to lead this program, and I am excited for the road ahead.”

Gearing also helped coach athletes that went on to break a total of eight school records throughout the 2021-2022 season, and he helped lead his student-athletes to five more scoring swims at the 2022 ACC Championship meet compared to the previous year. He also helped coach five national-qualifying men’s and women’s relay teams in 2022.

Prior to FSU, Gearing spent time at the University of Arkansas at Little Rock where he was the Assistant Women’s Swimming Coach. In his tenure with Little Rock, Gearing helped guide the women’s team to score over 100 more points, double the number of podium finishes, and scored in every single swimming event with nine more finals swims at the 2021 Missouri Valley Conference Championships compared to 2020. In Gearing’s tenure, Little Rock achieved six school records, 17 times that were in the program’s Top-5 all-time, and he helped coach an athlete to Conference Swimmer of the Week twice.

In 2019, Gearing joined the Indiana Hoosiers as a volunteer assistant coach. That year, Indiana was a powerhouse program whose women finished third in the Big Ten conference and were projected to place within the top eight teams at the NCAA DI Championships before the meet’s cancellation due to COVID-19. He began as a volunteer assistant coach in May 2019 and was promoted to a full-time assistant in February of 2020.

At Indiana, Gearing played a role in the recruiting process as well as logistics within the team. Not only was he responsible for creating workouts for the mid-sprint group, but Gearing also tracked every training group’s volume and intensity throughout the season to analyze effectiveness and suggest future improvements. He also coordinated Indiana’s social media accounts, notably boosting their team Instagram page to become the most-followed collegiate swimming and diving team account at the time.

Before joining the Hoosiers, Gearing studied at Queens University of Charlotte in North Carolina, serving as a volunteer assistant coach for the Division II swimming and diving team all four years of his undergraduate studies. Gearing received his degree in exercise and sports science and graduated in December of 2018. While with the Royals, he helped Queens to eight DII National Championships between the men’s and women’s teams.

Gearing also worked as a volunteer assistant coach with the club Team Elite Aquatics directly under David Marsh, the head coach of the 2016 United States women’s Olympic team. He organized training plans for various athletes at the National team level as well as handled communication administratively.

“I have many mentors, colleagues, and friends to thank for their support with this decision but most importantly is my family. My wife, Caroline, is my biggest supporter and does a great job of holding me accountable and keeping me on course. Being a father to my son, Michael, is the greatest joy of my life and I can’t wait for the team to meet him,” said Gearing. “I’m ready to get to work and start developing tomorrow’s leaders at Catawba today. It’ll be a fun and exciting time as we turn the page and begin a new chapter of Catawba Swimming. #RollTribe

What They’re Saying About Matthew Gearing:

Matthew has been a trusted and loyal coach on deck from the start. His passion to learn, has and continues to be remarkable. I most appreciated his willingness to contribute to high performance cultures without being intimidated. Matthew, since working with me has gone on to learn other systems and with being offered the position at Catawba he is ready to implement his own system. I am excited to watch the team’s growth and to be a resource for him in this effort.

Matthew is a student of the sport of swimming. His aquatic intelligence has been on fast forward since starting university. He poured his heart and soul into learning, contributing, and planning championship swimming all while nurturing remarkable experiences.

He contributed at a high level to 8 of our 14 National Championships. He was mentored by Olympic coaches and worked with American and World Record swimmers. Most importantly when you ask him about his greatest accomplishments, he talks about his joy of developing student athletes swimming skills and roles within a value driven system. He has seen first-hand that when people are valued and nurtured, they can move mountains.

I am excited for Matt, Caroline, and Michael to return home and start leading his vision under the direction of an amazing Athletic Director Michelle Caddigan. Matt has the support system in place to help him thrive.

I have had the privilege of observing Matt throughout his entire career from his Undergraduate days at Queen’s to now his current position at Catawba as the new head coach. If you were to design the optimum path to prepare yourself to become an elite swimming coach, you can do no better than follow the path that Matt has taken so far.

Undergraduate degree in Sports Science – Check. Observe and participate in the building of a winning culture at Queens – Check. Make yourself indispensable to an elite swimming coach (David Marsh – Team Elite) – Check. Volunteer at what was at the time the hottest NCAA program (Indiana) – Check. Gain experience running your own training group at Arkansas Little Rock – Check. Being a part of a Power Five program as a full-time assistant – Check.

Along the way Matt has continued his education by reading, observing, and consulting with the elite coaches in the swimming world. If Catawba hired Matt to take them to the next level, they picked the perfect guy. To his future opponents, I give you one word of advice. LOOK OUT!

Welcome home Matthew, can’t wait to share the pool deck and watch you build your system. Proud of you and proud of the team that you have built around you to support you in your effort.

Welcome back to NC Matt! Excited to see you back on the deck, especially with our first year in the South Atlantic Conference as a sponsored sport.

Catawba is getting one great coach!

As someone who got the privilege to swim for matt for a year. Catawba got an amazing coach and person

He may be young, but I’d hire someone with 8 years of coaching experience at some pretty good schools!

Love to see it! Congrats Matt, love the wave of younger coaches taking on big roles!