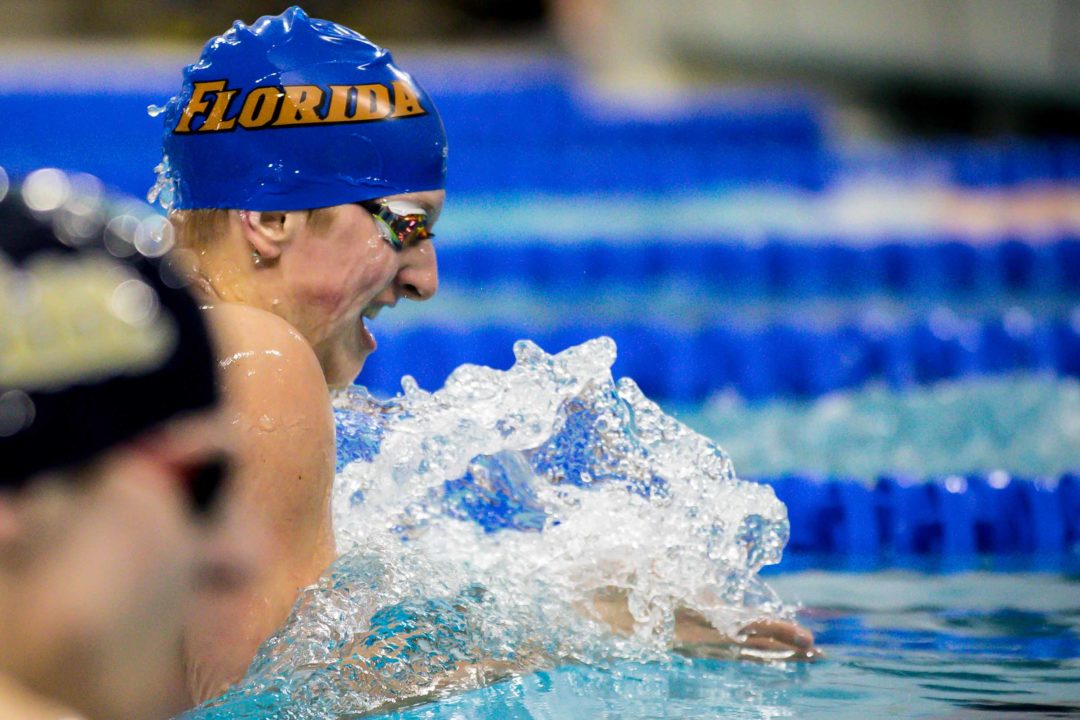 Florida graduated the highest-scoring senior class in the SEC, but they still lead in total returning points in search of a 9th-straight conference title. Archive photo via Jack Spitser/Spitser Photography

Florida Women Travel to Georgia for Season Opener on Friday

The Gators will open the season against Georgia at 10:00 a.m.

Despite an exodus of transferring talent, the Florida men extended their SEC win streak to 8 consecutive seasons on the backs of some huge freestyle performances. Kieran Smith (500 free) and Bobby Finke (1650 free) broke American and NCAA records, while Khader Baqlah (200 free) capped off a distance free sweep between the trio of Gators.

But event wins were spread around the conference and not only hogged by the top four teams. Fifth-place Mizzou won the 100 fly with Danny Kovac, 9th-place LSU had breakout freshman star Brooks Curry win the 100 free and last-place team South Carolina won the 100 breast with senior Itay Goldfaden.

Returning points would put Florida and Georgia in a rough stalemate, with Texas A&M lurking. But the key factor yet to be decided are returning redshirts. Florida lost sophomore freestyler Trey Freeman midway through the year, when he had knee surgery and took a redshirt season. But Georgia had top backstroker Javier Acevedo sit out to train for Canadian Olympic Trials. It’s not clear yet whether either of these two will return next year, or sit out once again to prep for the postponed Olympic Games.

Georgia graduates just a single relay leg – but on the flip side, Georgia’s relays last year weren’t very good. (Outside of a 3rd-place 800 free relay that loses its best leg, UGA was no higher than 7th in any other relay, with dead-last finishes in the 200 free relay and 400 free relay). Florida should be in good shape, with all but four relay legs returning and Freeman potentially upgrading a few legs.

Texas A&M returns the conference’s #1 individual scorer in Shaine Casas, plus 75% of their individual points, but they’ll have to refill about half their relay legs.

Further back, Auburn could be a program to watch, with a conference-high 84% of individual points returning. On the flip side, Kentucky graduates an incredible 19 of 20 relay legs and will have to retool in a big way.

We ranked Georgia as the top recruiting class in the SEC. They brought in two blue-chippers in #2 overall recruit Luca Urlando (45.6/1:40.9 fly) and #3 Jake Magahey (14:51/4:12.7/1:33.3 free). The Bulldogs could potentially have the top two butterflyers in the conference with Urlando and Murphy, and both elite freshmen should be upgrades to any and all of the sprint free relays, though that’s not either swimmer’s specialty.

But it’s a pretty deep set of recruiting classes beyond Georgia. We had Alabama in the top 10 recruiting classes nationally, led by 19.7/43.2 sprinter Matt King and long course 52.3 flyer Bernardo Bondra. Meanwhile Florida has a star sprinter of its own in 19.6/43.0 Adam Chaney, and the Gators bring in a really, really deep class of 14.

Auburn’s class is deep, too, with 1:35.8 freestyler Michael Bonson and 1:49.6 long course freestyler Mikkel Gadgaard out of Denmark. We also ranked Tennessee’s class (a 47.3/1:43.4 backstroker in Harrison Lierz and their own 1:35.7 freestyle type in Will Jackson), and the Auburn/Tennessee/A&M classes are all very much in the same tier at this point.

Mizzou adds at least one standout (46.6 flyer Daniel Wilson), and we were somewhat intrigued by the classes from Kentucky and LSU, the Wildcats getting a pretty good international sprinter (22.9 long course Max Berg of France) and the Tigers a solid Swedish IMer (long course 4:28.5 Emil Hassling).

The strength of Florida’s current sophomores (next year’s juniors) is hard to bet against, especially if Freeman returns. Either way, the relays should probably take a step forward with the addition of Chaney and only two high-impact legs (Khader Baqlah’s 100/200 frees) lost to graduation. Florida was already two points away from being the top relay-scoring team at men’s SECs last year.

There’s no doubt Georgia should move up from just 218 relay points last year – that’s almost 70 points behind the top-scoring teams and only ahead of the two programs that took DQs last year. Their recruiting class is a little smaller, but more top-heavy than the rest of the conference – in our minds, that probably translates better to NCAA production next year, but might not yield as many SEC points as some of the bigger freshman crews, even with how extraordinary Urlando and Magahey are.

That’s why we’ll take Florida to make it 9-in-a-row on the men’s side. A&M could very well go all-in at SECs, pushing for a conference title that would be a big selling point for that fast-rising program. They’re very much in the hunt, especially if both Freeman and Acevedo sit out the Olympic year or A&M’s freshman sprinters blow up like Casas did as a rookie.

Alabama and Auburn should be close. It was a rough showing for Auburn’s men last year, fading to 8th but losing one place solely on a relay DQ. They’re a lot higher in returning points this year, losing just two scorers to graduation and a single point to transfer. But we’ve still got Alabama a tick higher based on their immediate-impact recruiting class.

Some key races to watch in the off-season: the medley relays, where almost every team is in full rebuild. Collectively, the conference returns just 16 of 40 legs in the 200 medley relay. Outside of Georgia (which returns all four legs on both medleys), we’ll see almost-entirely new relays from Texas A&M, Missouri, Tennessee, Kentucky, LSU, and South Carolina, all of which return one or zero legs in the 200 medley.

Anyone know about his progress at all?

Was just thinking about him. Any updates? Has he been swimming? Would love to see him come back

Vargas was part of a program in CA that was more LC focused. But he has developed well there especially in his 2IM

Bringing in Luca is a big win for the Georgia 800 free relay, definitely can replace that graduated leg