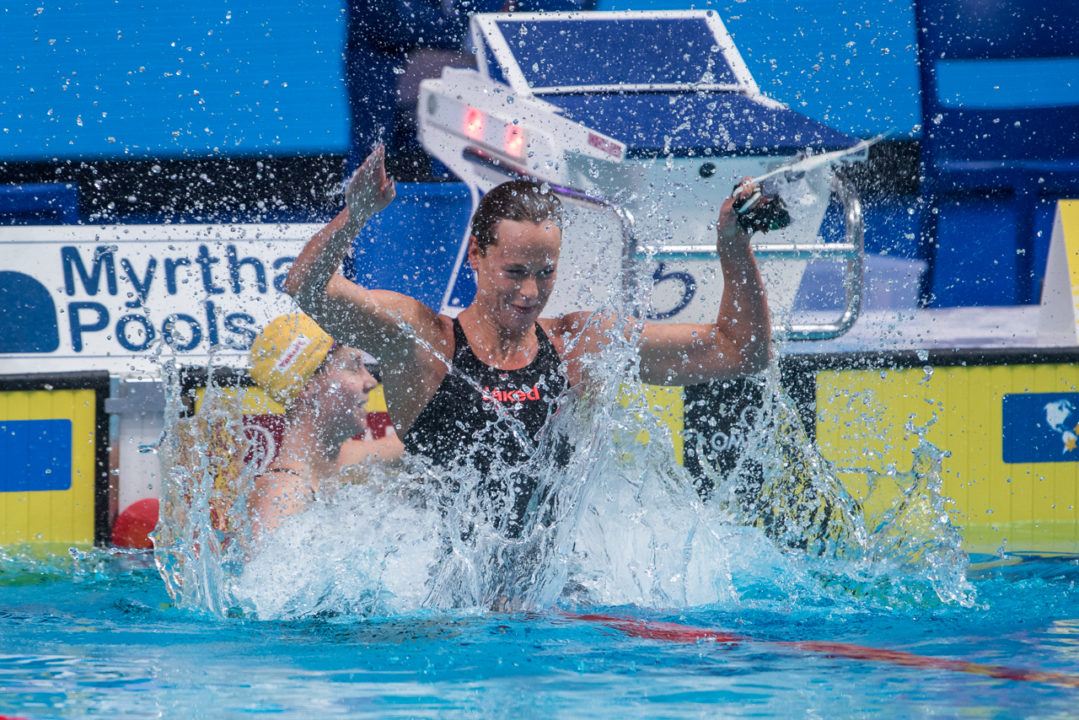 Watch as Federica Pellegrini of Italy edges Katie Ledecky for the gold medal in the 200 freestyle at World Championships in Budapest. Current photo via Peter Sukenik/www.petersukenik.com

World record-holder Federica Pellegrini of Italy won her signature race in Budapest on Wednesday evening, blowing past USA’s Katie Ledecky and Australia’s Emma McKeon over the final 50 meters. It was the seventh consecutive world championship medal-worth performance for the Italian in this event.

It looked like a battle between Australian Emma McKeon and American Katie Ledecky, but Italy’s reigning world record holder in this event kicked in another gear the final 25m to overtake them both at the end for gold. Pellegrini registered the only sub-1:55 time of the night, earning a time of 1:54.73 for the sole gold. This marks her 7th consecutive world championships medaling in this event.

In a thrilling battle down the stretch, McKeon and Ledecky wound up tying for silver, marking the American’s first silver in a major international championships. Both of these women were faster last night in 1:54.99 for McKeon and 1:54.69 for Ledecky, but each wound up slamming the touchpad in 1:55.18 for the tie.

Of note, in 5th place Michigan Wolverine Siobhan Haughey became the first Hong Kong swimmer ever under the 1:56 mark with a final time of 1:55.96, beating her time from Rio.

It just goes to show you that Ledecky is incredible but human. She can’t go a best time every swim, and it’s fair to say the 200m free is the toughest race to execute in swimming. She had one of the most fantastic Olympics ever but she is not the best female swimmer in the world. I have been saying it for months and at the beginning of the week, Sjostrom is the best in my opinion.

The 200 distances of all strokes (not just freestyle) are hard as hell.

Rowdy Gaines was on tilt after the race but Todd Harris unintentionally bailed him out by failing to grasp the significance of the moment and babbling standard fare. That gave Rowdy enough time to shut up and mostly compose himself.

The result was very surprising given the easy semifinal in 1:54.69 after the 1500. Otherwise I wouldn’t have been stunned. Once an all time great has peaked and hit a wall there are going to be flat efforts. This won’t be the last and it probably wasn’t the first. Mallory Comerford is very fast but she has no business chasing down Katie to a tie in an NCAA 200.

I only now noticed that Ledecky got actually lucky. She was less than one tenth of a second away of being out of podium at all.

You’re too obssessed about Ledecky. LOL.

The real reason nobody says Ledecky and McKeon lost the race was they forgot the pace when you are swimming. Its incredible they lost between 1 and 2 seconds in the last 100 meters, (no counting the initial jump in the first one, of course) because of their absurd speed they tried to kept in the first 100 meters. Ledecky – 56.09/59.09 = 1:55.18 (1 second dropped) . McKeon – 55.83/59.35 = 1:55.18 (2 second dropped)
Ledecky increased more than one second and Mc Keon two seconds in the second 100 meters. This is unforgiven at this level. Pellegrini, an specialist and a champion, did her distance as a champion she is, with perfect splits in both. She kept… Read more »

You are probably not familiar with the statistics of Ledecky swimming 200 free. She was 1:58 five times since Kazan WC. In different combinations: slow start, fast start, regular start. Whatever. 1:58 is her comfortable zone. The probability of her to swim this time is very high. 56.09 was not fast for her before. In her Olympic race she was 55.4. She was 55.98 at first 100 yesterday finishing 1:54.6. And she didn’t pushed herself yesterday easily solving the goal of this race to get to the final race.
I probably missing something in your logic. Yes she failed to finish the race properly and maybe because per today her conditions (that she may not were aware of) 56sec… Read more »

She spun her wheels too much on the 3rd 50

I told my friends months ago that I wouldn’t be surprised if Ledecky never goes another LCM freestyle best time again. Her performances at this meet could be due to a variety of factors.

1. She’s peaked. Even though she got better every year since London, no one can continually improve every year.

One more point probably skipped your attention. It was coach Meehan who said that he doesn’t know where he can lead Katie from the point where she already is.
“At the end of last year’s Rio de Janeiro Olympics, where Ledecky won four gold medals and a silver, the national team’s director, Frank Busch, took Meehan aside and playfully told him he better not mess up Ledecky’s swimming.
“I said to him, ‘I know you’re not actually joking,’” Meehan said. ” NYT.
It was a real concern that something like this WC is coming.

I am starting to have my doubts about Greg Meehan. Not that he cares a whit what some random internet person thinks, however Katie’s times have been dominant but a trifle off so far here at Worlds. Looking back a few months, at NCAAs she had a brilliant 500, but was slower than Conference in the 200 and 1650. So what is going on? Perhaps overtraining, the bane of collegiate swimming? Hard training combined with long hours studying along with less regular sleep?

Or it could just be that she has reached her peak speed, or her body has gradually changed, or just this it is still an “off year” for major swimming. Look at Janet Evans; she swam her 800 world record in 1989 before she was really even starting into her NCAA career. She never swam faster, even though she remained dominant for years after.

That’s a good thought. I think Janet Evans had a less stable situation in college as I recall. That probably contributed to her slowdown. From he outside Ledecky’s situation seems stable. But she is slower ever so slightly.

Megan should ask hard questions why that might be. By 2020 the competition in the 400 will be faster and their is not much room to spare.

Lionesses stalk, then pounce and kill. This is what Federica did today.

It is not only that Ledecky swam slowest ever last fifty in major finals, but it is also that Federica swam her second best ever time in textile. That is what she did today.