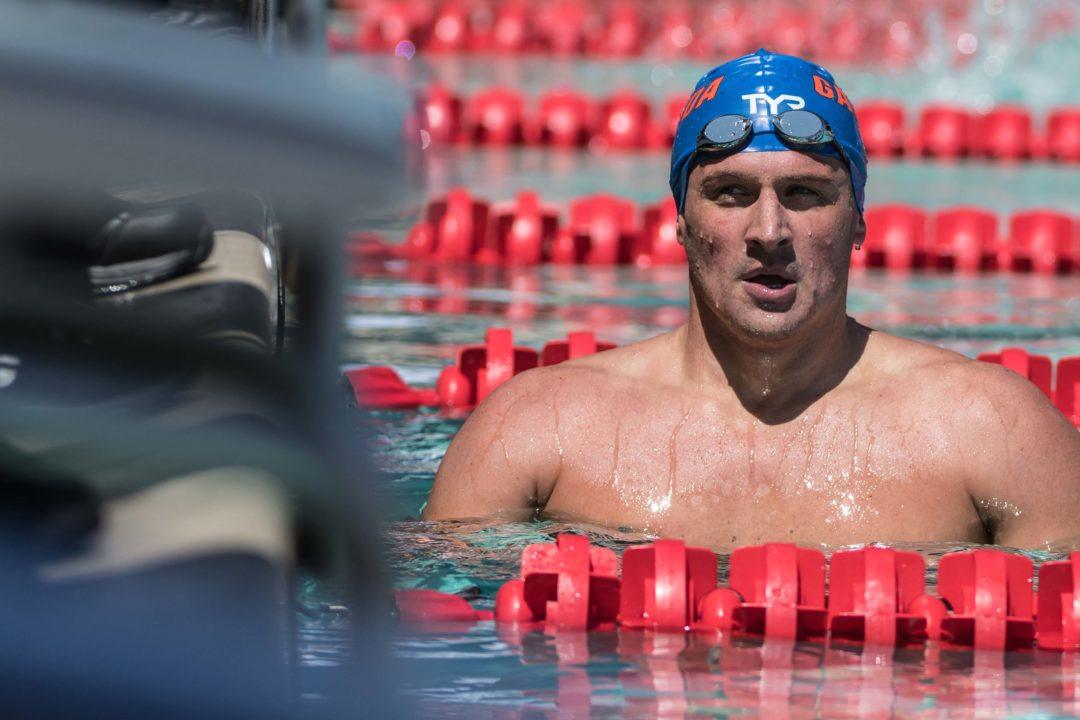 American Olympian Ryan Lochte has accepted a 14-month ban for having received intravenous infusions in a volume greater than 100mL in a 12-hour period without a Therapeutic Use Exemption (TUE).

Per the U.S. Anti-Doping Agency’s announcement today, July 23, “On May 24, 2018, Lochte, 33, posted an image on social media depicting himself receiving an intravenous infusion.”

The release continued, “A subsequent investigation by USADA, with which Lochte fully cooperated, revealed that Lochte received an intravenous infusion of permitted substances at an infusion clinic in a volume greater than 100 mL in a 12-hour period without a Therapeutic Use Exemption (TUE).”

Lochte’s Instagram image has since been removed, but the tweet including a link remains with the quote, “Athletic recovery with some #ivdrip”

This is the photo that got Ryan Lochte banned 14 months. pic.twitter.com/1CljxSFlzy

The USADA specified,“Intravenous infusions or injections in a volume greater than 100 mL within a 12-hour period are prohibited at all times – except for those legitimately received in the course of hospital treatment, surgical procedures, or clinical diagnostic investigations under the USADA Protocol for Olympic and Paralympic Movement Testing, the United States Olympic Committee National Anti-Doping Policies, and the Fédération Internationale de Natation Anti-Doping Rules, all of which have adopted the World Anti-Doping Code and the World Anti-Doping Agency Prohibited List.”

In a press conference today shortly after the USADA announcement, Lochte stated, “I wasn’t taking anything illegal. Everything was legal. You can get it at CVS, Walgreens, but there are rules and you have to obey them…Don’t worry. I’m not giving up. I’m going to keep going [to Tokyo 2020].”

“I’m just going to post on my son and my wife, leave everything else out,” Lochte said. “Once you put anything on social media, it’s out there for the world.”

Lochte’s 14-month ban is back-dated to May 24th, the date of the infusion, which means the 33-year-old is ineligible for the Pan Pacific Championships in August, as well as the 2019 World Championships.

His suspension is the 2nd one announced just this week for the American squad, as 2017 world champion Madisyn Cox was handed a 2-year doping suspension after Trimetazidine appeared in an out-of-competition doping test. Matthew Willenbring, a Junior National Team member, was also sanctioned this past March for having tested positive for Hydrochlorathiazide.  In both of these instances, the relevant anti-doping authorities (USADA and FINA) also declared the ingestion to be mitigated to reduced sentences from the maximum of 4 years.

National Teamer Amanda Kendall was also hit with a 3-month suspension back in May of this year for self-reporting inhaler use.

Lochte, a 12-time Olympic medalist, 5-time Olympic champion, and current World Record holder in the 200 IM, has been rebuilding since a disappointing performance at the Rio Olympic Games where he missed the podium in the 200 IM and didn’t receive any individual medals. On top of that, his reputation took a hit when he embellished a story about being robbed at gunpoint and was eventually accused of vandalizing a gas station bathroom and being asked to pay for damages. He was ultimately given a 10-month suspension and dropped by a handful of high profile sponsors, including Speedo. His legal troubles in Brazil are still not fully resolved almost two years later.

In 2017, Lochte opened up about suicidal thoughts that he had in the immediate aftermath of the 2016 Olympic Games.

Since then, Lochte has returned to Gainesville and reunited with coach Gregg Troy, who coached him as he swam with the Gators at his peak in the sport. We’ve just started to see a glimpse of the Lochte who earned his status as one of the greatest swimmers in history. Given his recent performances, he had a strong chance of qualifying for the Pan Pacs team. Now, however, we won’t be seeing his full potential this summer or at next summer’s World Championships.

Only Michael Phelps has more Olympic medals in swimming than does Lochte.

Hard pressed for a 35 year old making the team in any event over a 100 in 2020 . Our younger swimmers are just to good. Could be the end of the line…. And by the way….What the HELL is he thinking?

He either doesn’t thinking at all or it was done intentionally to excuse himself from competition. What kind of possible purpose can it serve in May of 2018 if it was a conscious act of cheating?

Vitamins. He was being administered vitamins.

So if Lochte would have infused 100 ml of fluid, whether vitamins or ringer’s lactate, it would not have violated USADA and FINA rules. That the amount was greater than 100ml and it was not needed therapeutically was the violation. I understand that IV fluids can be used to mask banned substances, but it’s doubtful that is why Lochte was getting the IV. The difficulty in this rule is the granularity – 100 ml is OK – 101 ml or more and the swimmer violates the rule and is banned for 14 months if he/she does not have a therapeutic reason (e.g., dehydration contributing to confusion and disorientation). So it was not the procedure per se but the amount of… Read more »

Shouldn’t there be a cutoff point somewhere? Just about every drug that triggers a “positive” test has some sort of minimum limit that specifically triggers that “positive”. Are you advocating removing those minimum limits, too? A complete zero-tolerance policy (keeping in mind how metabolism and technology work)? Or on the other end of the spectrum: no limit at all, let them do it all?

If you think Lochte should be exempt from the rules others must follow, please just come out and say it. Come on–the man is 34 years old…when are you going to stop making excuses for him?

The comments above seemed to be piling on that Lochte was cheating, he was doping. Neither of those are accurate. Yes, he broke a pretty easy & very clear rule. He also made it a layup for WADA to sanction it considering he put it on social media too. A mistake that he is responsible for? Yes. An example of doping, cheating for an advantage? No. Conflating those two things is a bridge too far. I really do feel bad for Ryan & was excited to see what he was going to do this week. I look forward to seeing him back in 2019-20.

Yup, he really got robbed this time around.

Its vitamins for god sake

Agreed. He’s essentially going to need to swim about as fast as he did in his prime to have a shot at challenging the enormous wave of talent the USA has coming in 2020.

Eh, he’s younger than LeBron. As long as he keeps taking those IVs and doesn’t post any more pictures, he’s got a shot.

Lochte is about 5 months older than Lebron

Thinking? Is that one of his specialties?

And RIP USA Individual Medley this past week.