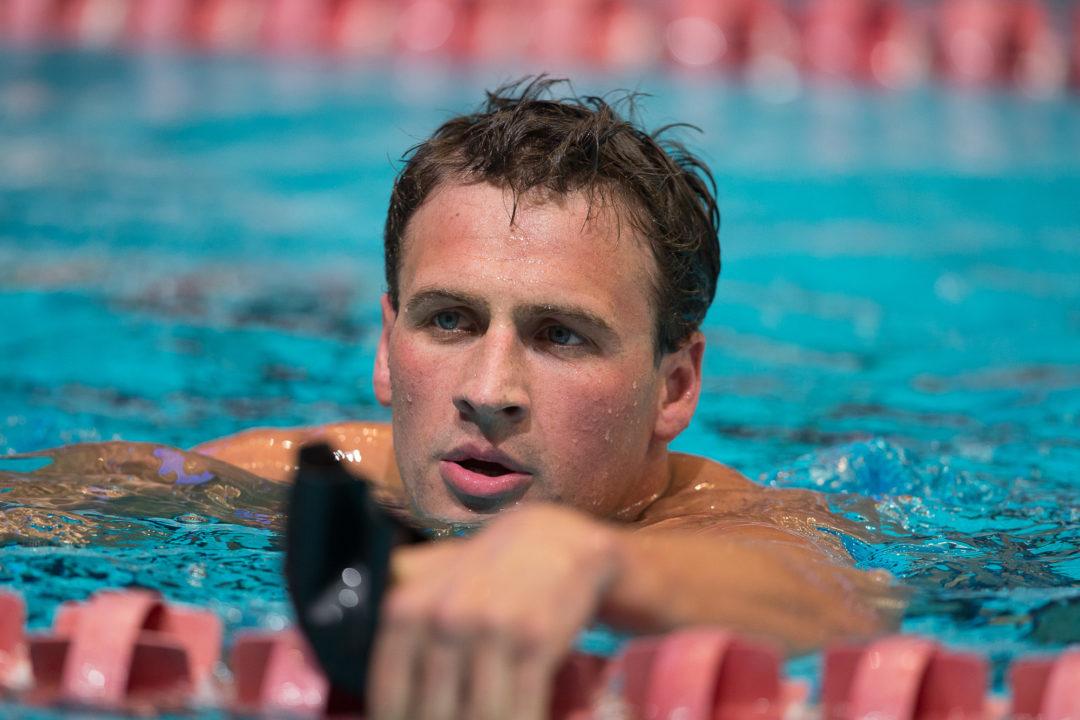 The United States Olympic Committee (USOC) and USA Swimming have announced the official punishments for four Olympic swimmers involved in an incident at a gas station bathroom in Brazil. Archive photo via Tim Binning/TheSwimPictures.com

The United States Olympic Committee (USOC) and USA Swimming have announced the official punishments for four Olympic swimmers involved in an incident at a gas station bathroom in Brazil.

The USOC’s press release confirms yesterday’s report that Ryan Lochte would serve a 10-month suspension and be rendered ineligible for the 2017 FINA World Championships.

In addition, Jack Conger, Gunnar Bentz and Jimmy Feigen will all serve 4-month suspensions that will keep them out of national team competitions through the end of the calendar year.

Bentz, being under 21, also has to serve 10 hours of community service for breaking USA Swimming’s curfew rules for athletes under 21.

Here are the major points of the full penalties for all four:

For Bentz and Conger, there’s no word yet on how this will affect their NCAA eligibility for the fall season, but the suspension will keep Bentz, Conger and Feigen out of the running for the U.S. Short Course World Championships, which take place in December. USA Swimming’s Winter Nationals are also ruled out due to this suspension.

The following sanctions have been agreed upon:

1. Suspended from domestic and international USA Swimming national team competitions for 10 months (through June 30, 2017), including the 2017 National Championships, which renders him ineligible for the 2017 FINA World Championships.
2. During the suspension, no monthly stipend from USA Swimming or the USOC.
3. During the suspension, no direct support or access to training centers or other facilities of the USOC.
4. Forfeits all USOC and USA Swimming medal funding for his gold medal at the 2016 Olympic Games.
5. Will perform 20 hours of community service.
6. Not permitted to join Team USA for its White House visit in connection with the Rio 2016 Games.
7. Not permitted to attend USA Swimming’s annual “Golden Goggles” event in 2016.

1. Suspended from domestic and international USA Swimming national team competitions for four months (through Dec. 31, 2016).
2. During the suspension, no monthly stipend from USA Swimming or the USOC.
3. During the suspension, no direct support or access to training centers or other facilities of the USOC.
4. Not permitted to join Team USA for its White House visit in connection with the Rio 2016 Games.
5. Not permitted to attend USA Swimming’s annual “Golden Goggles” event in 2016.

Further applicable to Gunnar Bentz due to violating a USA Swimming Olympic Village curfew rule placed on athletes under the age of 21:

1. Will perform 10 hours of community service.

“As we have said previously, the behavior of these athletes was not acceptable. It unfairly maligned our hosts and diverted attention away from the historic achievements of Team USA,” said USOC CEO Scott Blackmun. “Each of the athletes has accepted responsibility for his actions and accepted the appropriate sanctions. We look forward to focusing our energy on the Paralympic Games and the incredible men and women representing our country in Rio.”

“During an otherwise extraordinary Olympic Games, a small group of athletes had lapses in judgement and conduct that are unacceptable and not consistent with our expectations. When Code of Conduct infractions occur, it’s our responsibility to take action that reflects the seriousness of what happened,” USA Swimming Executive Director Chuck Wielgus said. “Unfortunately, this storyline took attention away from the athletes who deserved it the most. These athletes took accountability for their mistakes and are committed to represent themselves and our country with the great character and distinction we expect.”

FINA has also published a statement saying it supported the USOC/USA Swimming sanctions but would not impose any further punishments on the four:

Regarding the case of the four US swimmers whose behaviour at Rio 2016 has resulted in suspensions from the US Olympic Committee and USA Swimming, and now that the key facts have been established, FINA considers the sanctions applied as proportionate, adequate and sufficient. FINA notes the addition of Community Service, as imposed by the IOC Disciplinary Commission.

In light of these measures, FINA will not apply additional sanctions and will implement those now imposed on the swimmers at all FINA events.

This seems overly harsh all around, especially on Bentz and Conger.

Bentz and Conger were truthful and cooperated with authorities and get four months suspension. Some federations are more lenient with those that fail or skip an in competition doping test. I’m glad that USA Swimming and the USOC hold our athletes to a high standard, but this seems a bit much.

Bentz and Conger were only truthful and only cooperated with authorities after they were pulled off their planes headed back to the US. The stand up thing would have been for them to be honest, transparent, and remorseful (as necessary) immediately after Lochte went public. Not saying it would have been easy, or comfortable, but it would have been mature and responsible. Clearly no muzzle was applied given Lochte’s repeat performances on national media. Also – they were out drinking (and by all accounts getting quite drunk) until 5:00 AM in a city where some caution and decorum would have been wise, urinated on someone’s property, and just generally did not behave how athletes representing the US in a foreign… Read more »

WRT “45 other swimmers”…I’d be shocked if many more US swimmers weren’t out til 5 am partying in Rio, or even peeing on buildings. The main difference is that no one else’s behavior was publicly scrutinized.

fortunately for any of the 45 that broke the rule but did not “get caught” – like doper, it is all about being caught and no loophole to escape. As also pointed out by others, if one is not the biggest star of the team, there is a higher chance one will be punished and maybe even harsher punishment to “demonstrate” the consequence and highlight the federations to be “righteous” and “fair”. I agree the athletes should bear responsibility of their behavior. The story itself was blown out of proposition by all (including Rio police and media). I agree the athletes should be punished for breaking USA Swimming or USOC rules like being out etc. Just not sure if the… Read more »

There’s no evidence to support the more serious allegation here: that Conger or Bentz ever lied to authorities. They claimed they were, in their statements, and no one in Brazil or with the USOC has contradicted that. There was no obligation to hold a press conference to contradict Lochte after he went on TV and no one with knowledge of the situation has claimed that they lied to team officials. As to drinking and staying out late… I wasn’t there and I don’t know who “by all accounts getting quite drunk” refers to. None of this group but Lochte did anything more egregious than pee in an alley and surveillance video only shows them walking around, sedately. Bentz broke curfew,… Read more »

fixing typo: “claimed they were TRUTHFUL WITH POLICE”

At least they get to keep their gold medal money.

Except Feigen. Gold Medal Money is taxable. Feigen’s extorted payment is a characterized as a charitable contribution. It can’t be claimed as an expense and I bet your butt he doesn’t itemize so it’s not a deduction. Basically Feigen lost money on this whole thing AND that’s without consideration of legal expenses, extended Rio stay, etc. This is crazy.

Ryan said he would pay Jimmy back.

That payment would be declarable income, too.

Not if it’s a gift

Any way they can try & appeal any of this or is a done deal??

At this point, probably best just to let things play out and not make additional waves.

The email/press release indicates they accepted the sanctions, so not really.

Phelps gets his second DUI and is suspended for 6 months. Lochte pees on a building, lies about the incident (which we’ve found out had more truth than what the Brazilian police were letting onto), and gets 10 months… O yeah, those equate out to an even and fair distribution of punishment.

DUI is worse, but it’s also our judicial system’s job to doll out punishments for that. USA swimming made an exception by giving Phelps a 6 month suspension.