Olympian Joseph Schooling: “I Think I’m Done With The 200 Fly” 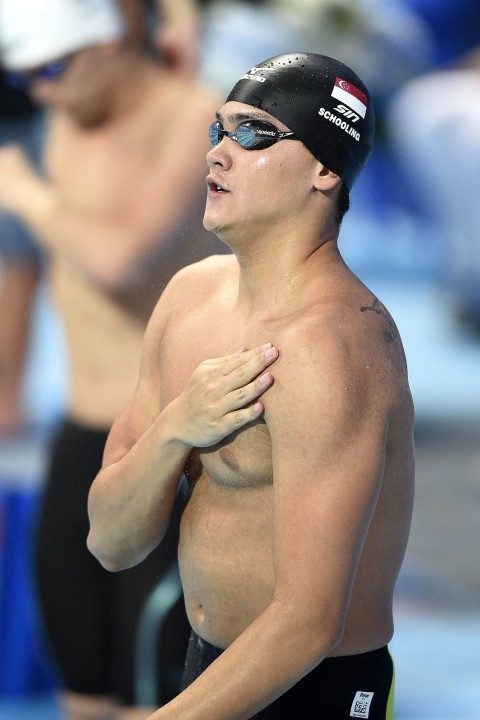 "I am comfortable focusing on the shorter races. Sometimes you just have to transition, that is how the career goes," says Joseph Schooling on night 2 of the Singapore National Championships. Archive photo via Simone Castrovillari

We recently reported that Singapore’s Olympic hero Joseph Schooling would be opting out of the 200m butterfly at the 2018 Asian Games, but it appears the 23-year-old may indeed be giving up the grueling event for good.

Speaking at the ongoing Singapore National Swimming Championships this week, where Schooling already won the 100m fly sprint, the Olympic gold medalist said, “I’ve raced the 200m fly for a very long time and I think I might be done with that race.”

Schooling earned an Olympic berth in the event back at the 2012 Olympic Games, where he finished 26th overall. Prior to that, he earned 200m fly bronze at the 2014 Asian Games followed by gold at 2015’s SEA Games. As a student-athlete at the University of Texas, Schooling earned 2 NCAA titles in the event, both as a lower classman.

However, in recent years Schooling has dropped the 200m fly as a rule. He was slated to swim it at the 2016 Olympic Games in Rio, as well as the 2017 World Championships, but bowed out of both.

“I am comfortable focusing on the shorter races. Sometimes you just have to transition, that is how the career goes. Michael (Phelps) stopped the 400m IM (individual medley) when he got older, and sometimes it’s just what you need to do,” Schooling told The Straits Times meet-side tonight.

By shorter races, Schooling is certainly including the 100m butterfly, the event in which he won Singapore’s sole Olympic gold medal. He indeed won the sprint tonight at the OCBC Aquatic Centre, clocking a modest 52.43 to take gold by just .16 ahead of the runner-up, Matthew Temple of Australia.

Of his performance tonight, Schooling told The Straits Times,  “I’d like to be a bit faster, but we are in hard training now and it’s my first long-course meet since the Worlds last year… I kind of dusted the cobwebs off (today).

“Physically, I am getting stronger; I’ve started getting my flexibility back – that’s something I lost in the past two years, lifting a lot of weights – and I’ve also lost some shoulder mobility.

“Although I don’t feel my explosiveness yet, I feel like my aerobic levels are great, I am not dragging around or dying (in the pool). I just got to keep working on it, get enough rest before the Asian Games and the speed will come.”

That’s about as lame as the rationalization Schooling just gave

Did Phelps swim 400IM at London 2012? Schooling is basically focusing on what he thinks he is interested in.

Yeah, and if you listen to Bowman’s version of the story, Phelps didn’t train much or consistently at all between ‘10-‘12, and in fact after an argument prior to London Phelps didn’t show up to practice for a week and a half after trials leading up to London until they went to Colorado Springs so they could salvage anything for the games. Btw, with all that said, Phelps still went a 4:09 and almost won a medal in that event in ‘12. I don’t think his body exactly, “gave up” on that event at that age. In fact, watching it, I think he mentally had his mind made up that he had no interest in Swimming it at all. I’m… Read more »

Yeah, he did, and he lost, handily.

Yeah but Phelps stopped training for the event after 2008, when he was 23. I’m not defending Schooling though; he has a lot of potential in the event being 1:37/1:55, I just don’t think he wants to go through the pain of training for it. I honestly think 200 fly training can be good for 100m swimmers though, and interestingly ever since he stopped swimming it after Rio, his times have gotten slower across the board…

Yeah but in fairness, Phelp’s body gave up on the 400 IM a long time before he did.

Getting whooped at NCAAs two years in a row works wonders.