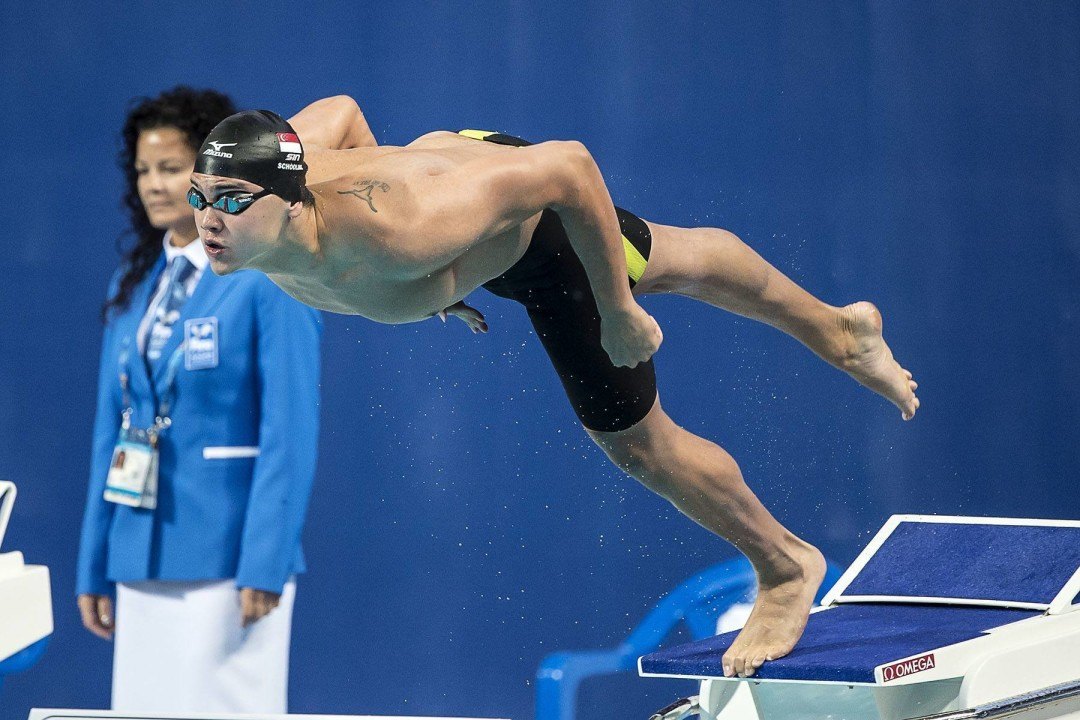 Three weeks ago, we reported that Singapore’s Joseph Schooling, who had qualified for four events for Rio with FINA “A” cuts in the 100 and 200 meter butterflies as well as the 100 and 200 meter freestyles but had only entered the first three, was leaning toward dropping the 200 fly in favor of the 100 free.

On Tuesday, Singapore Swimming made it official, announced from its Twitter account that Schooling will drop the 200 fly in Rio to focus on the 100 fly and 100 free.

“sg_swimming#RIO2016 Update: Joseph Schooling will swim in the 100m Freestyle and Butterfly. “After a lot of thinking by Joseph and discussions between Eddie Reese and I, we have come to the decision to drop the Men’s 200m Butterfly event. Joseph will be swimming the 100m Freestyle event instead where we believe he has a very good chance to be in the final,” said head coach Sergio Lopez.

Schooling, a rising junior at University of Texas, is the reigning NCAA champion in the 200 yard butterfly, and holds the U.S. Open record in SCY in that event, too. He first won the SCY event at NCAAs as a freshman with 1:39.62, missing the U.S. Open and NCAA records by .31. This past year, when he was a sophomore, he destroyed both marks, notching a 1:37.97 to rewrite history by 1.34 seconds.

Schooling is entered in the 2016 Olympic Games with a seed time of 1:55.73, which he achieved in the summer of 2015 at the Southeast Asian Games. The swim lowered his own Singapore national record, which had been set at 1:56.27 since the 2013 World Championships. At 2015 World Championships in Kazan last summer, Schooling swam 1:56.85 in heats to qualify 13th for semi-finals, then 1:56.11 to finish tenth overall; he did not advance to the final, as Tom Shields was the last one in with 1:55.75.

I thought his 2 fly looked good this year, but he must want to sprint! 🙂

That Texas swim did him in

How can he win Olympics medal when he is only college swimmer and swim in bathtub?

Oh idk maybe the fact that he’s been 50.96 in the 100 lcm fly, just like idk josh prenot is the top seed and won NCAA titles or idk the fact Ryan Murphy has won every backstroke race at NCAAs since he’s been in college and yet is a top 3 seed at the olympics. Just saying

Boy, it’s great when you post the same thing in every article.