Schooling “Leaning Towards” Dropping 200 Fly For 100 Free In Rio 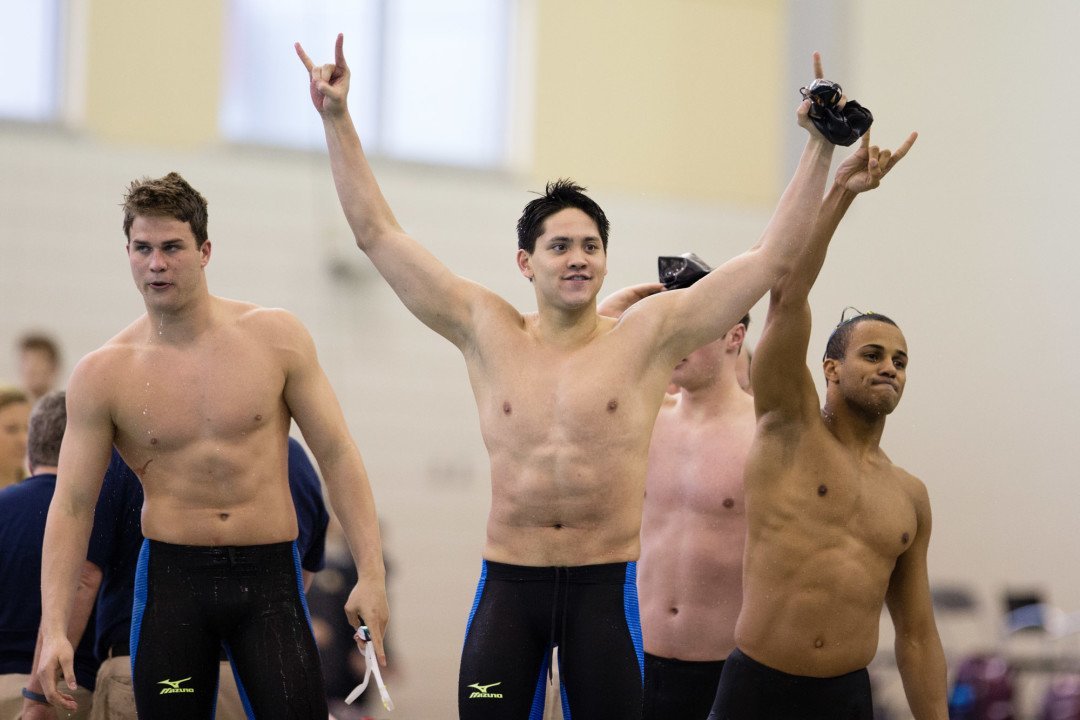 Although Schooling has earned FINA "A" cuts across 4 events, he's only entered in 3 for Rio. Of those, he and his surrogate Singaporean coach Eddie Reese are still working out the plan. Archive photo via Tim Binning/TheSwimPictures.com

We reported yesterday that Texas Men’s Swimming Head Coach Eddie Reese would be accompanying his Longhorn butterfly star Joseph Schooling to the 2016 Olympic Games as part of the Singaporean coaching staff. Now, more insight is being revealed into the schedule 21-year-old Schooling will tackle once in Rio.

The talented multiple national record holder swam to FINA “A” cuts in the men’s 100m butterfly and 200m butterfly events, as well as in the 100m and 200m freestyles. For the Games, Schooling has been entered in all but the latter and even that 3-event line-up isn’t set in stone just over 20 days out from Rio.

Schooling will certainly swim the 100m butterfly, the event in which he earned Singapore’s first-ever World Championship swimming medal via his bronze last year in Kazan. As for the other two, however, Schooling says that he is “leaning more towards the 100m freestyle” over the 200m butterfly, as “the 100m free is less taxing and sets me up well for the 100m fly.” Reese said that they will decide on Schooling’s schedule within a few weeks, but Schooling says he is “preparing towards” the 1free/2fly swap right now.

The 100 butterfly time of 50.96 Schooling registered in Kazan for bronze still remains as the 4th-fastest time in the world during the Olympic-qualifying period, giving the Singaporean a healthy shot at the podium against rivals Laszlo Cseh, Michael Phelps and Chad Le Clos.

Schedule-wise, keeping both the 100m freestyle and 200m butterfly on his plate would mean contesting both a semi-final and final on Tuesday, August 9th, assuming all goes according to plan with Schooling’s performances. Eliminating the 200 fly would mean just the 100 free prelim in the morning and then the potential semi-final at night on August 9th, followed by a possible 100 free final on August 10th. Removing the 200 fly from his schedule would alleviate having to throw down another series of tough swims before his 1fly main event.

Regardless of what he does swim, Schooling is excited to have an additional valuable coaching resource on deck during it all.

Says Schooling, “I’m excited to go to the Olympics with two of my coaches. This could not have turned out better. This is great for Singapore. Eddie is really experienced and having him on our side is phenomenal.”

Makes sense. Feel like I remember him talking about working through timing differences in his fly over the two distances, dropping the 200 could definitely help him tune in on his 100 stroke.

Look at that picture! I am going to miss watching John Murray next year. He looks like he is about to kick someone’s ass right there. Either that, or pissed at himself for not “beating that start horn” better.

This kid is only 21 years old and has a bright Olympic future (potential for multiple medals in a single Olympics). He should swim all three events for the experience (Phelp’s 2004 Olympics helped prepare him for the 8 medal haul in Beijing). He swam 8 events before his 1:37 200 fly at NCAA ’16. He’ll be fine swimming 8 events before the 100 fly final.

Multiple medals? What events?
The only realistic medal chance is 100 fly, can’t see him medaling in any other event.

Yes, 100 fly is his only realistic chance in Rio. I’m saying he has a chance to take in multiple medals at future Olympics, such as 2020 Tokyo. He’ll be 25 and at the peak of his swim career that year.

4 years is still far away. Can’t predict someone is potential multiple medalists in 2020 unless their name is Ledecky.

It’s just three races, why not do all of them?

It may take him a few more years to have the big breakthrough from SCY to LCM 200 fly like it took for Shields. Shields even said he started using a wider Phelps-like catch specifically for the 200 LCM fly. Makes sense to focus on the 100’s this time around. The 200 fly is going to be comparatively demoralizing going against Phelps, Leclos, and Cseh.

Yup, and he’d been seeing those three again in the 100. Being the youngest and the freshest for that final might not be the worst idea.

If he’s trying to set himself up to medal in Rio, then swapping the 200 fly for the 100 free is his best shot. Two events (and two 100s at that) is far from a heavy lineup, but it puts him in the best position to be rested and ready to go in the 100 fly- and he’ll need to be in top form to take down le Clos, Cseh, or Phelps just to get bronze.