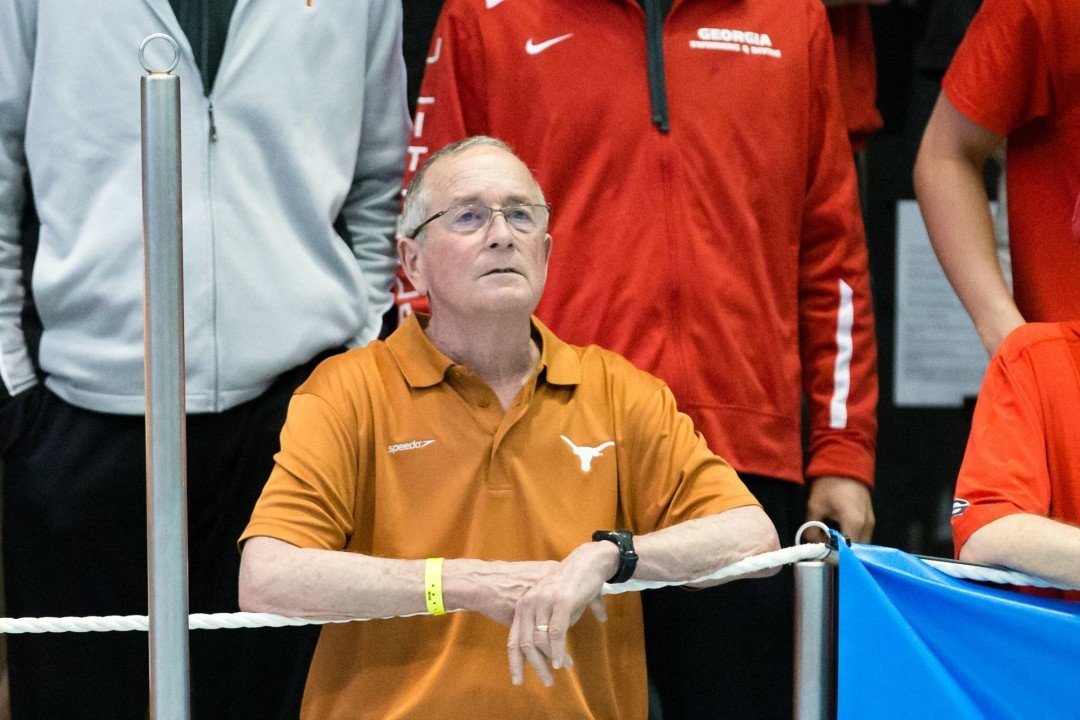 Singapore's National Olympic Council has announced it will be including University of Texas Men's Swimming Head Coach Eddie Reese on its 2016 Olympic Games coaching staff. Current photo via Tim Binning/TheSwimPictures.com

Singapore’s National Olympic Council (SNOC) has announced it will be including University of Texas Men’s Swimming Head Coach Eddie Reese on its 2016 Olympic Games coaching staff. The Singapore Swimming Association is just waiting confirmation on its request for accreditation from the Rio Organizing Committee, but Reese will most likely be on staff alongside the nation’s National Head Coach Sergio Lopez and Technical Director Sonya Michelle Porter.

Having earned 12 NCAA team titles in 38 seasons with the Longhorns, Reese has captured NCAA Coach of the Year honors 8 times. He has also been on 7 Olympic coaching staffs in the past.  Joseph Schooling, Singapore’s first-ever medalist at a World Championships with his bronze medal last year in the 100m butterfly, swims under Reese at Texas. The 21-year-old is aiming to win a first-ever swimming medal for Singapore at an Olympic Games this summer.

Although not named to the U.S. Olympic coaching staff, Reese saw 4 Texas-affiliated swimmers make the Rio roster for the stars n’ stripes. Townley Haas, Jack Conger and Clark Smith are all current Longhorn swimmers under Reese and all scored spots on the men’s 4×200 freestyle relay, with Haas also claiming a 200m freestyle individual event bid. Jimmy Feigen, who earned a slot on the 400 freestyle relay, is also a former Longhorn who trained with Texas’ post-graduate group until joining SwimMAC Elite several months ago.

Reese and Lopez have worked together in the past, not only having Schooling in common, but also putting on a combined clinic last year in Singapore. As reported yesterday, Singapore is sending its smallest Olympic squad in 30 years to Rio, with Schooling joined by siblings Quah Zheng Wen and Quah Ting Wen.

SwimSwam spoke with a University of Texas source who said that Reese is not being paid to be on the Singapore Olympic Staff and will pay his own travel expenses.

Any explanation as to why he was not named to U.S. olympic coaching staf

The bottom line is that if he was on the U.S. Staff they would not let him coach Joe. On the Singapore staff he can coach Joe and all his other swimmers that will be there.

Oh boy. I understand the idea of being there for Schooling and all the other UT guys, and maybe Eddie declined the US assistant job to let others have a shot. But maybe he just doesn’t like Bowman.

Is there any basis for this Bowman comment or is it pure speculation?

Pure speculation. It’s also probably an easier gig (less taxing), while also being there for his guys, not to mention all the other U.S. swimmers who look up to him.

Eddie removed his name from consideration as Olympic coach to let others do it. I believe he declined in 2012 as well and probably several world championship coaching positions. There’s no drama with Eddie & other coaches, I think he feels that he’s done it and it’s time to let others do it. Eddie coaches Schooling and my guess is he was asked if he’d help in Rio. No doubt he’s happy to consult with US Olympic coaches and help Haas, Conger, Smith & anyone who asks