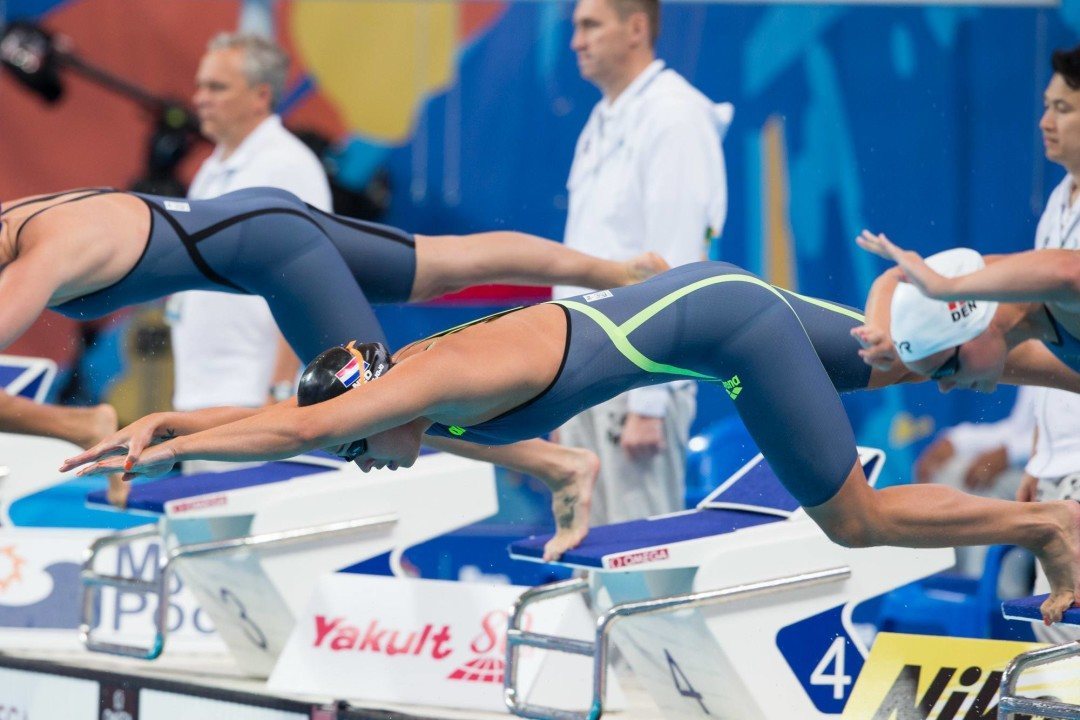 Ranomi Kromowidjojo will get the chance to defend double-sprint gold in Rio, as she is named to the Dutch Olympic squad. Archive photo via Tim Binning/TheSwimPictures.com

The Dutch Swimming Federation (KNZB) released its 17-member strong roster for the 2016 Rio Olympic Games. As is the trend worldwide, a mix of veteran superstars and rising talent comprises the lineup who heads to its final training camp in Sardinia at the end of this month.

Notable members of the female contingent includes stalwart sprinter Ranomi Kromowidjojo, who will look to defend her double gold in the women’s 50m and 100m freestyle events from London. She’ll also be an instrumental piece of the nation’s potentially dangerous 4x100m freestyle relay.

Also a vital component of that relay is teammate and recovering cancer survivor Inge Dekker. Having been diagnosed with cervical cancer just this past February and undergoing surgery a month later, 30-year-old Dekker has put up some strong performances at her recent comeback meets of Sette Colli Trophy and the KNZB Challenger. She will prove a mighty competitor in the women’s 50m free and 100m butterfly races individually.

Young Marrit Steenbergen has the potential to pop a few surprise swims, as the 16-year-old was a member of the Dutch silver medal-winning women’s 400m freestyle and mixed 400m freestyle relays at last year’s World Championships in Kazan. Prior to that she nabbed 3 individual medals at the inaugural European Games in Baku, including clinching gold in the women’s 100m freestyle in a time of 53.97 at just 15 years old.

The men are led by freestyle specialist Sebastiaan Verschuren, 2016’s European Champion in the 200m freestyle. He also took 100m freestyle silver at that same meet to put his name on the list of potential finalists for Rio. Verschuren also brings past Olympic experience to the table, having finaled in the shorter freestyle event, finishing 5th at the 2012 London Games, while also earning 11th overall after semifinals in the 200m freestyle.

Of the strong squad, Managing Director Jan Kossen says, “This is a team to be proud of. With the successes of the European Championship in London last weekend in Hoorn still in mind, we look confidently to the Olympics. Good to this team to see the mix of experienced Olympic swimmers and young talents. The number of novices at these Games also gives confidence to the more distant future. “

The following swimmers and swimmers go to Rio: Women:

* Debutant at the Olympics

Thanks for posting! But are you sure about Sander Transcript?