No Zane Grothe In Men’s 1500, Arguably The Most Wide Open Event 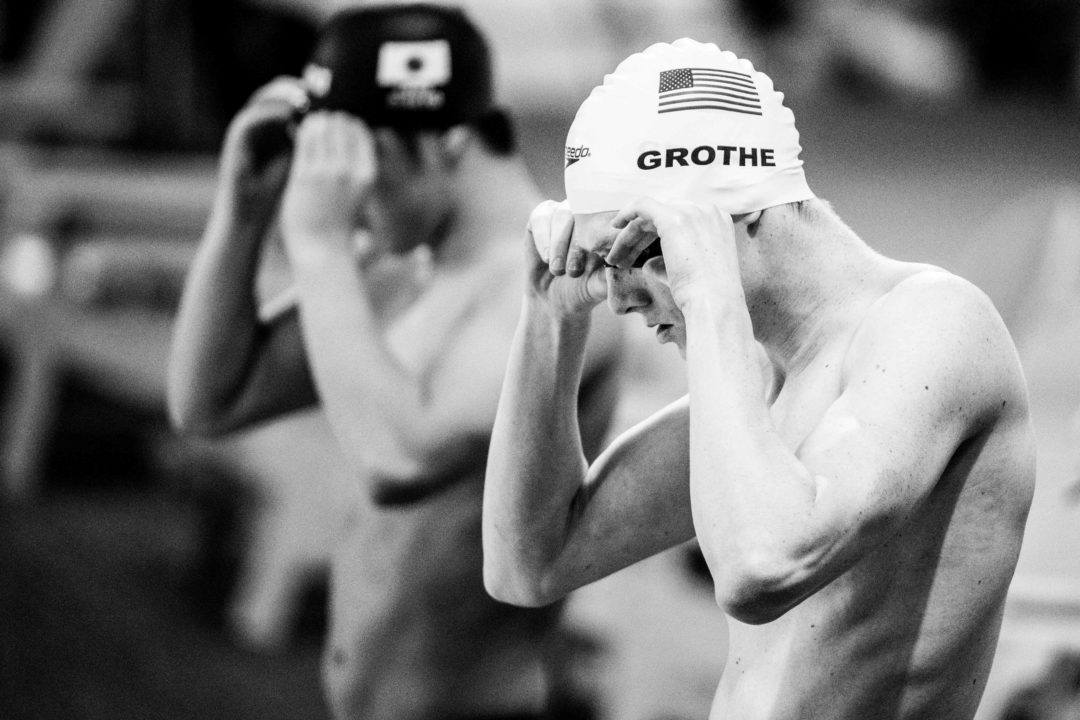 Zane Grothe adds to the list of contenders sitting out of the men's 1500 in Indianapolis. Archive photo via Mike Lewis/Ola Vista Photography

The 1500 freestyle was arguably going to be the most wide open event on the men’s schedule at next week’s U.S. Nationals, and it just got a little wider.

Along with both Connor Jaeger and Michael McBroom out of competition, Olympic 4th place finisher Jordan Wilimovsky opted not to swim at Nationals to focus on Open Water this summer, and 2017 NCAA 1650 champion and new American Record holder Clark Smith told us he wouldn’t swim the 1500 at the meet to hone in on the 200, 400 and 800 free.

Now upon the release of the psych sheets yesterday, we’ve learned Zane Grothe will also not compete in the event. Grothe’s absence isn’t a huge surprise, given he’s found most of his success in the 400 and 800, but he did produce a best time of 15:11.72 to make the Olympic Trials final last year.

Grothe isn’t the only notable absence on the 1500 psych sheet either. Olympic Trials finalist Logan Houck won’t swim, nor will 10th through 12th place finishers Adam Linker, Sean Ryan and Chris Swanson. None of those three is a major surprise, but the amount of top finishers from the Olympic Trials who won’t compete in this event in Indianapolis is staggering.

Five of the eight finalists in Omaha won’t be there, and 9 of the top 12. This event is now insanely wide open, with Junior Pan Pac gold medalist Robert Finke and U.S. Open runner-up True Sweetser our picks for the two available World Championship spots.

Grothe was favored by many to take one of those two spots if he swam this event, especially given his 14:29 1650 in February and the fact he ranks 2nd among Americans this year at 15:22.05. We initially had him pegged for 3rd, but now with both him and Linker not in the event, we have updated our picks (again). Aaron Apel and Taylor Abbott now figure into our top-8 predictions.

I don’t know where to find this info offhand-do we have to start worrying about both guys making the FINA A cut in that event?

I blame USA swimming for the horrible meet line up. Why on earth is the men’s 1500 first? I bet if the 800 were first like the women’s line up both those guys would be doing it. You might as well not even bring anybody for it.

Congratulations USA swimming, you played yourself

Why does the 1500 being on the first day affect the decision whether or not to swim it? This is a genuine question

Wrecks your body for the rest of the meet

1500 is a very taxing race, especially at that level, and usually is a real difficult race to start a meet off with due to how exhausting it can be for people at that level.

Doesn’t mean every swimmer is capable of you’re one example. The distance free at the end of the meet allows the pure milers to build into it with maybe a prelims 400FR and then throw down a 1500. Starting with a mile limits most people from racing a 400/200 ft if that is an option.

I’m just saying this isn’t a unique situation. I think some of the comments here (not yours necessarily) are off-base to suggest US men’s distance swimming is in a freefall. Look at the ages of these kids in the psych sheet. Where did Jaeger and Wilimovsky start?

And he didn’t make the A final in the 400IM or 400free on the days in-between. Still awesome swims out of the B final by him but a 1500 on the first day is rough on the legs. 1500 on day one kills legs for 200 and 400 the following days. Not to mention it makes it virtually impossible for them to do any other events that day. The 1500 is not the only event of the day. Trials order was better because rarely is there a 50free and 1500free stud.

Not to be argumentative but…. at Jr. Pan Pacs only two swimmers from a country can make A finals. Going strictly by time, Finke would have made A finals in both 400 IM and 400 Free but for the two swimmers per country rule. Andrew Abruzzo is another who swam those events at the meet. My point being, as I stated previously, was that USA men’s distance swimming has a bright future.

And it is safe to say there will be even more scratches in that event. Looks like a few entered just to see where they might fall but aren’t going to blow the rest of the meet by hitting the 1500 first off.