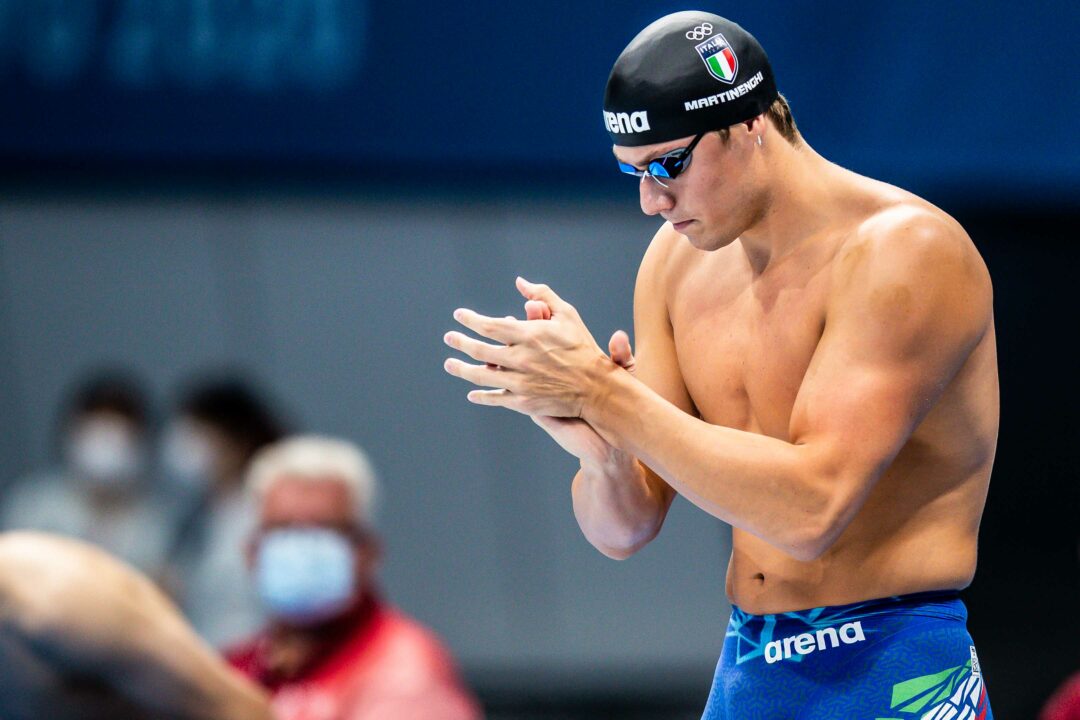 The 21-year-old has now lowered the record seven times, and has positioned himself to vie for a medal on Sunday after qualifying third for the final. Current photo via Jack Spitser/Spitser Photography

Nicolo Martinenghi got off to a strong start in his debut Olympic Games, following up a solid prelim swim by resetting his Italian Record in the men’s 100 breaststroke for the seventh time in the semi-finals.

Martinenghi clocked 58.28 in the first of two semis, downing his previous National Record of 58.29 set at last month’s Sette Colli Trophy in Rome.

The 21-year-old first broke the Italian Record in 2017, putting up a time of 59.31 to erase Fabio Scozzoli‘s record of 59.42, and has constantly chipped away at it over the last four years. That includes breaking 59 seconds for the first time in December of 2019 (58.75), and then launching himself into third all-time in the event with a 58.37 in April.

Following that 58.29 in June, Martinenghi entered the Tokyo Games tied with Belarusian Ilya Shymanovich for fourth on the entry list, with Dutchman Arno Kamminga (57.90) and American Michael Andrew (58.14) having overtaken him in the historical rankings.

However, Martinenghi has positioned himself for a medal after his semi-final swim, trailing only world record holder Adam Peaty (57.63) and Kamminga (58.19) during the morning session. Kamminga had a very strong preliminary, clocking 57.80, but the other medal contenders don’t appear to be at their best.

Martinenghi went 58.68 to advance fourth out of the heats, and after his National Record in the semis, has now been sub-59 on seven occasions. Set to turn 22 at the end of the Games, Martinenghi also breaks his tie with Shymanovich and now holds solo fourth all-time in the event.

The last Italian to win an Olympic medal in the men’s 100 breaststroke came from Domenico Fioravanti, who claimed a historic breaststroke sweep at the 2000 Games in Sydney.

Craziest part of tomorrow’s final, the top 5 performers in history are all in the same heat!