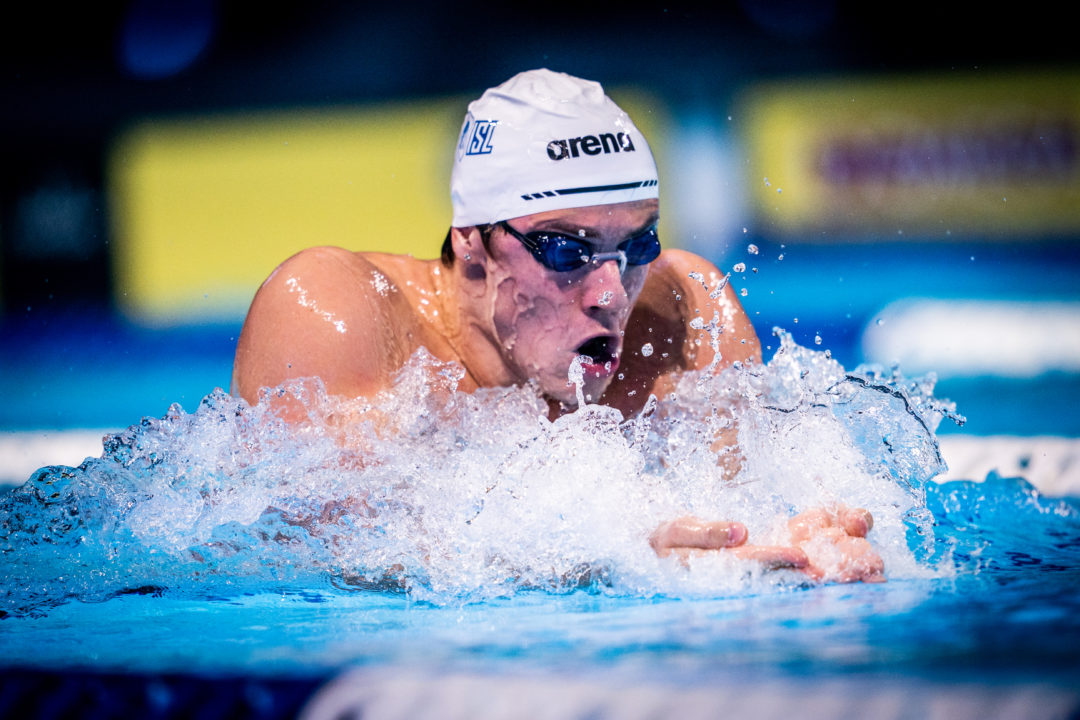 His time lops over three-tenths off of his old best, which was also the old Italian record, of 58.75. He passes Arno Kamminga on the all-time list. Current photo via Mine Kasapoglu for ISL

Tonight in Riccione, 21-year-old Nicolo Martinenghi unloaded a lifetime best and new Italian record of 58.37 in the 100 breast, easily winning the Italian spring title. That lops over three-tenths off of his old best, which was also the old record, of 58.75.

Martinenghi now ranks #1 in the world this year, unseating World Record-holder Adam Peaty of Great Britain from his 2020-21 season throne.

Looking at the historical rankings, this was a massive swim. Martinenghi becomes the third-fastest performer in history, behind only Peaty and Ilya Shymanovich of Belarus. His time moves him .06 ahead of the Netherlands’ Arno Kamminga, who went 58.43 in March 2020. Previously, Martinenghi’s 58.75 ranked him 12th all-time.

During the second day of the Italian Nationals in Riccione, Nicolò Martinenghi set a new Italian record in men’s 100 breaststroke. He shaved 0.38s off his own previous national record. Now he is the 3rd fastest performer of all time. Can he win a medal at the Olympics? pic.twitter.com/pOvcrFlmUZ

Guerra, where is your Mister Vloggie Cody Miller?

Can he medal at the next olympics or even make the team?

My guess is NO.

Aside from anything Dressel swims in at the olympics. This might be the race to watch. This will be exciting

tbh, the 2020 Breast field has more spread than in 2016. Chupkov has won every major championship since Rio and has pushed the WR out by nearly a second since 2016. In Rio, the top 5 finishers were within 0.41 of eachother and there wasn’t a clear favorite going into the final (closest was probably Marco Koch, who had won the ’14 Euros, 15′ WC)- I think its unlikely we’ll see that again. However, the 200breast does have the feeling that it’s being redefined every championship final so that’s exciting to see.

Exciting? No one has gotten closer to Peaty… the closest is 1.5 seconds away. How is this Exciting?

Wellbrock, Paltrinieri, Romanchuk. Who is number 4?
Totally agree, it is THE race i look forward to!

4? Wellbrock Paltrinieri Romanchuck.. who else??

I’m not AnEn, but he is likely referring to Grgic who based on his projected trajectory should challenge the big 3

Yes, i was referring to Grgic.

I’ve been waiting 5 years for this, I don’t think there’s a race I won’t be watching.

I rewatched this race (men’s 4x2free 2019) the other night because I forgot who won. Because I felt like I was expericing it for the first time, it felt like the authentic experience and I’ve gotta say, this was probably a top 3 race of the week and i’m very looking forward to this one in Tokyo.

Womens 100fl has quietly got really exciting imo. Wouldn’t be at all surprised if it’s sub 56 to medal and the WR goes down.

Only 1.5 seconds away from the world record.

this is so ridiculous lmao