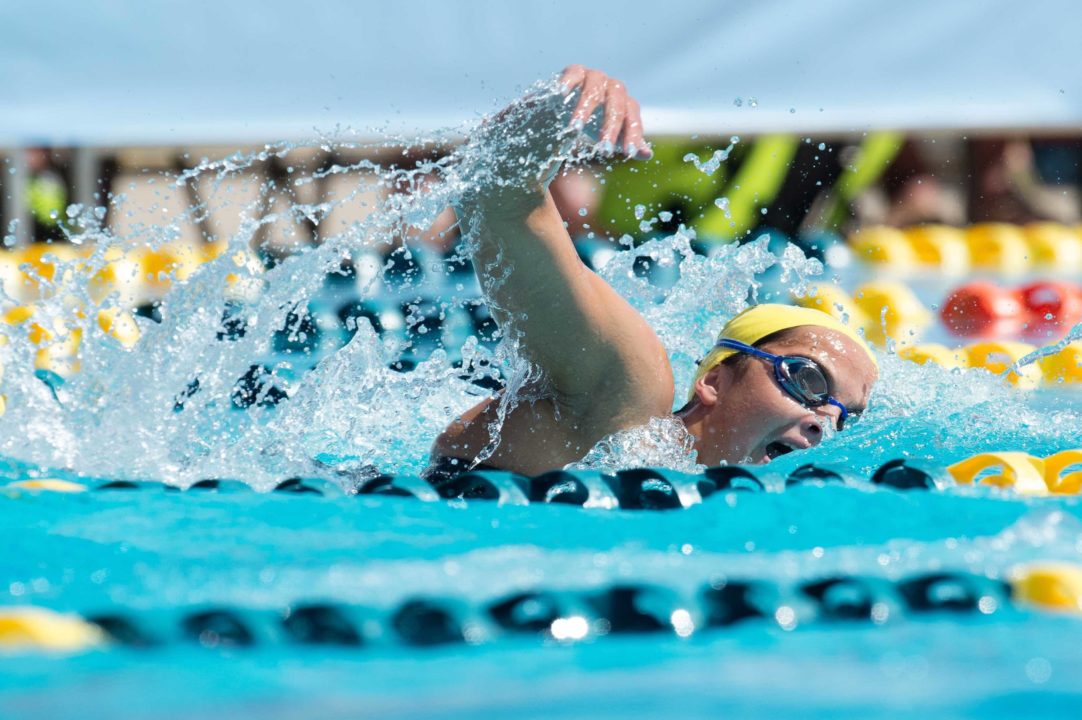 Katie McLaughling put up a 1:57.64 in her 200 free LCM, ranking her in the top 25 times in the world this year. Stock photo via Mike Lewis/Ola Vista Photography

During Saturday’s finals at the NOVA Grand Challenge, Cal’s Katie McLaughlin dominated an NCAA-star studded 200 free super-final. McLaughlin won the super-final with a 1:57.62, ranking her in the top 25 times in the world this year.

Last month, McLaughlin swam two 2:02s at the SUN Devil Spring Open in this event. Her current personal best stands at 1:56.88 from the 2018 Pan Pacs, which qualified her for the B-final. McLaughlin then won the B-final with a 1:57.34, which is three-tenths faster than her swim from this evening.

In the same event, 15-year-old Israeli Anastasia Gorbenko won the consolation final with a monster personal best of 2:00.83, dropping 4 seconds off her seed time. Gorbenko is now the 16th-fastest 18&U swimmer in the world this year.

Throw weitzel into the mix as well.

Sure, if Australian, Canadian and Chinese teams got so scared that they DQ.
That would be 23-23-24-25 years old relay. Pretty mature.
After 1:58.58 of 14 years old Claire Tuggle last season I thought that American team got finally a fresh blood and at trials she will be at least in 1:56 range. Let’s see if she improves her personal best this summer joining 1:57 group.

agreed with that list ….but who knows who will get the relay spots …

Great to see mclaughlin Back to her best

It looks that Katie McLaughlin is the only reliable help to another Katie in the fight against rising Australian team in 4×200 relay.

To beat Australians Americans need at least one 1:55 swimmer ( besides Ledecky). All listed by you swimmers won’t make it most likely. Schmitt is capable of doing that but she is not reliable. Smith did broke barely 1:56 barrier two years ago and didn’t come close to that since. Other mentioned by you swimmers may not able to do it.
BTW you forgot about Gabby DeLoof with her last season break through 1:56.55. But this season she is very quiet by far (1:59.77)
Katie McLaughlin showed very impressive come back and great performance in many events last season. That makes me think of her as one of most reliable members of this relay.
And of course… Read more »

24
-1
Reply
remel can do anything
Reply to  Yozhik

It is more than 4 sec difference. We can expect about 2.5 sec improvement from two Katies and hopefully the rest of the team will be by 1.5 sec better as well. But there is no room for mistakes and just “good” performance.

Litmus vs Ledecky
Manuel vs McKeon
Smith or Schmitt against Jack
McLaughlin against Wilson or Trossell
Untested 1:57 vs tested 1:56
I will take the Americans. Should be a decent race but still the Americans.

Manuel won’t swim this relay, unless she gets really bored awaiting for her sprint events. I would rather expect Comerford’s participation from sprinters camp but she isn’t even close to compete against McKeon whose personal best is 1:54.8

Yes, Australian girls were not in in-season hard training at this meet in April , but it also were not trials yet that are still to come. And you are right it is basically 1:56 against 1:57 now. So if Americans manage to be 1:56 they may get only even. It may happen that relay exchange will be a decisive factor and American team was never superb with that. I think that USA team coaches will rather agree for the silver medal then go all-in for the gold risking being DQed.

Scmitt is most unreliable..
Mclaughlin is OK hopefully her time drops further

I have a deep respect for Allison Schmitt and you can see it from my posting in the most recent article about Allison Schmitt. But if you check the variance in results of swimmers in this discussion then you will see that she has the highest one. The most predictable results with the minimal variance has surprisingly Simone Manuel.

I think we’ll have a better idea of this after worlds, but I think the breakdown you list above ignores the problems that Australians as a team have had with showing up at meets that are not the Commonwealth Games.

If you have a chance then watch one more time w4x200 relay race in Tokyo last season. Very exciting. Most likely it will be the same american team at WC. There is definitely something to learn from
https://m.youtube.com/watch?v=3kae0hygi48 (17’30”)

usa can’t afford to see any other 1.58 to start the race ….thats a Big NO NO . They need a 1.56 to start things up …could Comerford bring that speed or anyone else other than Schmitty ?

Yes, that’s why that is the lesson to learn from.