5 Swimmers To Watch At the 2019 Speedo Grand Challenge 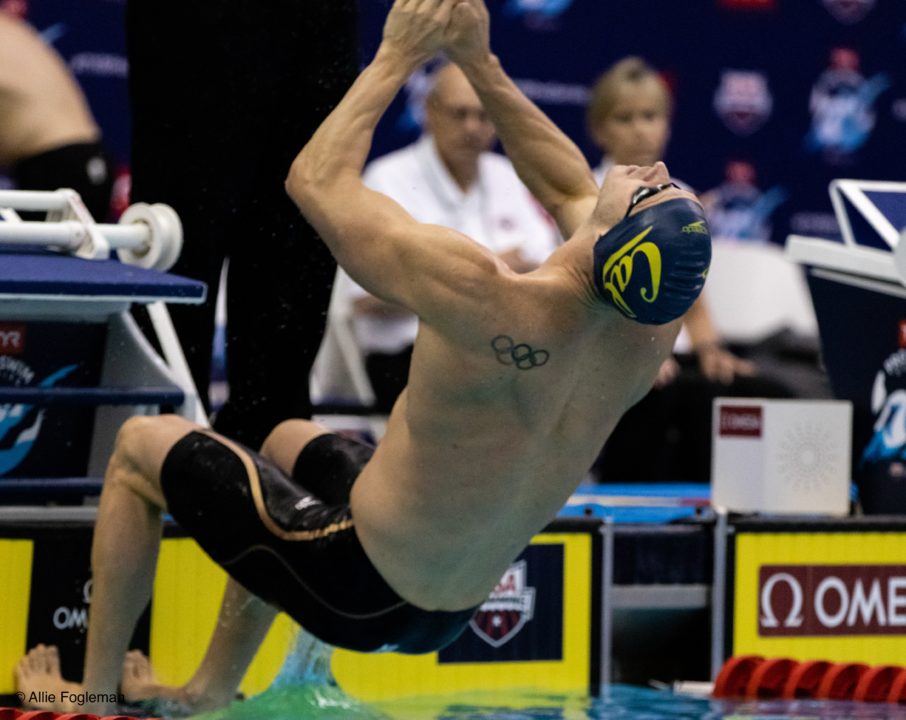 100 back world record-holder Ryan Murphy was top 2 in the world last year in both backstrokes, and he leads a loaded (and California-centric) backstroke field in Irvine. Archive photo via Allie Fogleman

The Grand Challenge is a unique format in which the top four qualifiers in each event make a separate final where they compete for money:

In the Championship final, each group of four will compete for prize money, with the winner’s prize determined by spinning the “Mystery Wheel.” The Wheel can award prizes anywhere from $300 to $1000, with other wrinkles like “winner takes all.” The full prize money breakdown”

Last summer’s breakout star in the 200-meter freestyle is set to compete in a heavy event lineup this weekend. After winning Swimmer of the Meet for his senior season NCAA Championships performances, Seliskar is entered in the 200 free, 200 IM, 100 fly, 200 fly, 100 free and 400 free. Most notable to watch will be that 200 free (which Seliskar won at both Summer Nationals and NCAAs over the past year) the 200 IM, where Seliskar had the fourth-fastest time among Americans last summer, but dropped a ton of time to hit the second-best swim in history in the 200-yard IM this college season.

The Swedish star has become known in the U.S. for her versatility at the NCAA level, but Hansson could have huge significance as a part of Sweden’s relays at the World Championships this summer. The Trojan Swim Club swimmer will compete in the 200 IM, 50 free, 200 free, 100 fly, 100 back and 100 free this week. Keep a special eye on the 100 fly, where Hansson already ranks #5 in the world this year and could become just the 20th woman in history to break 57 with a drop of a few tenths in Irvine.

Like Seliskar, Weitzeil is another Cal standout coming off a stellar college season in which she broke the American and NCAA records in the 50 free. She’ll swim the 50 at the World Championships this summer, but won’t get a shot at the 100 free there, outside of her leg of the 4×100 free relay. So it’s worth wondering if she’ll follow a similar pattern as Cody Miller and some of the Indiana pros last weekend, resting for an in-season meet to try to lock in a spot on the 2019-2020 U.S. National Team before Worlds.

The distance freestyle fields, especially on the men’s side, are loaded in Irvine. 800/1500 free World Champs team member Jordan Wilimovsky leads the way with the top seed in both the 400 and 1500. But he’s got some good young talents behind him. World University Games team member Nick Norman is also entered in both, and in the 1500, he’ll be joined by open water standouts Michael Brinegar and Brennan Gravley.

On the women’s side, we get a pool appearance from Erica Sullivan, the young open water star who deferred her enrollment at USC to work towards an open water Olympic bid in 2020. She’s entered in the 400 free, 800 free, 400 IM and 200 fly.

One of the few bright spots in a disappointing summer of 2018 for Team USA was Ryan Murphy, who looks ready to reclaim his throne as the world’s best backstroker. The 100 back world record-holder was top 2 in the world last year in both backstrokes, and he leads a loaded (and California-centric) backstroke field in Irvine. Behind him are current Cal collegians Bryce Mefford and Daniel Carr – Mefford is qualified for World University Games this summer, but only in the 50 and 100 back, while Carr is qualified for the Pan American Games. Olympian Jacob Pebley (a Cal alum) is also entered in the meet, but only appears in the 100 back and 100 free, not the 200 back where he made his Olympic appearance.

Also of note in the backstrokes is the absence of Olympic champ Matt Grevers, who could have been in the mix for a Worlds entry in the 50 back. Murphy sewed up the first entry with his win at Nationals last summer, but with Grevers not competing, the second spot at Worlds will likely go to Michael Andrew, who has been putting up big in-season swims in that event all year to lock down the entry.

Was there ever any update on Weitzeil’s injury at NCAA’s?

Meet mobile is awful. The newest version is worse than all the earlier versions. Does anybody have any fixes? Has anybody complained loudly to MM? Does anybody from MM read SwimSwam?? Please help. It’s basically unusable.

Does anyone know what happened to Deck Pass Plus as well? Upgraded and now not functional.