McEvoy Clocks 2nd Fastest 50 Free Of His Career For Gold 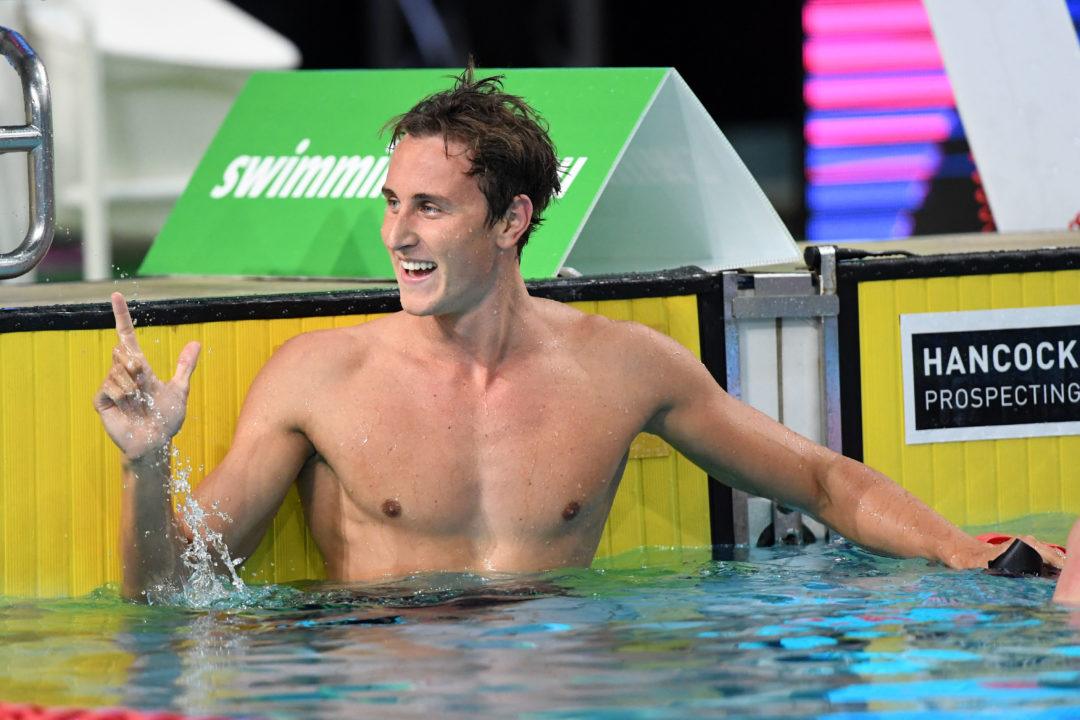 Cameron McEvoy proved his back once again, doubling up on his 100 free from night 1 with a commanding victory in the 50m free on the final night in Melbourne. Archive photo via Swimming Australia Ltd./Delly Car

The final night of competition in Melbourne saw the likes of Cameron McEvoy, Kyle Chalmers, Ariarne Titmus and Emily Seebohm in the pool to add more events to their possible line-ups for this year’s Short Course World Championships in Hangzhou, China this December.

Seebohm had already raked in victories here in the 100m IM, as well as via a backstroke sweep of the 50m/100m/200m events. Tonight, the 26-year-old gutsy racer blew away the 200m IM field, winning the gold by well over a second in 2:06.75. That mark checks-in as Seebohm’s 3rd fastest performance of her storied career, as well as very easily dips under the QT for Hangzhou of 2:08.84.

TSS Aquatics’ Laura Taylor got the job done in spades in the women’s 200m fly, winning the race in a monster 2:05.98.  The 19-year-old was 2:08.14 in this event at this same meet last year, but hacked well over 2 seconds off that mark to earn gold this evening. Taylor’s 2:05.98 now checks-in as the 10th fastest performance in Australian swimming history, as well as moves the teen into the top 5 of the world rankings this season.

Taylor has been making strides in this event in both the SCM and LCM formats. She out-performed Aussie teammate Emma McKeon on the Gold Coast this year, snagging 200 fly silver ahead of McKeon’s bronze in this event at the 2018 Commonwealth Games.

24-year-old David Morgan did the most damage on the men’s 100m fly, winning the close race between himself and the morning’s top seeded swimmer, Matthew Temple of Nunawading. Morgan touched in 50.55 to claim the 5th fastest time of his career, while Temple scored a new PB of 50.73 for silver. Nicholas Brown settled for bronze in 51.03.

A minimum of 50.54 was needed to be considered in this event for the 2018 Short Course World Championships, so on a strict time level, Morgan fell just .01 shy.

West Brisbane’s teen breaststroking ace Zac Stubblety-Cook produced a historic swim in the 200m distance tonight in Melbourne, finishing in 2:04.94 for gold and a new career-fastest effort by almost a second. However, among the historic Australian swims of all-time, Stubblety-Cook’s performance slides into the 5th spot.

The 19-year-old is now situated as the 6th fastest swimmer in the world this season. Ironically, even with this head-turning performance, his 2:04.94 falls painstakingly short of the Aussie-dictated QT for Hangzhou of 2:04.93. Stubblety-Cook did not hit a QT in the 100m either, so he may not be given the chance to swim at the 2018 Short Course World Championships.

In the men’s 400m IM, Thomas Fraser-Holmes produced his fastest swim since 2015, touching in 4:04.55 for gold. That cleared the QT for Hangzhou and should be enough to place the veteran, who is still rebounding after having been suspended for missing doping tests, on the roster for Hangzhou.

Titmus’ performance now checks-in as the 6th fastest Australian time in history, as well as enters the world rankings as #5.

Silver tonight went to another teen in 17-year-old Kaylee McKeown. The backstroking ace, who took 50m back gold at the Youth Olympic Games just weeks ago, came away with a solid 1:55.84 in this 200m free. Mikkayla Sheridan was right behind in 1:55.91 for bronze.

Opting out of competing at the 400m IM here in Melbourne, Mitch Larkin had full strength tonight for the 100m back, which he sliced and diced to a time of 49.98. That mark is just .02 off the 49.96 he produced at the FINA World Cup in Budapest that currently sits as the #1 performance in the world.

Tristan Hollard finished in 51.61 for silver this evening, while Jordan Merrilees wrangled up bronze in 52.84. Larkin was the only swimmer to dip under the 50.59 qualifying mark for Hangzhou.

The men’s 1500m saw Josh Parrish reap gold in the form of his winning effort of 14:43.84. That beat his previous personal best of 14:45.29 and bumps the 21-year-old ahead of Jack McLaughlin as the 8th fastest Aussie performer in history. However, per Aussie qualifying procedures for Hangzhou, the minimum time standard needing to be hit was 14:38.07, a mark equivalent to what would be needed to become the 5th fastest Aussie ever.

In the men’s marquee event of the 50m freestyle, Cameron McEvoy proved again that the man is back to his old self, taking gold in a wicked-fast 21.00. That mark is just .25 shy of McEvoy’s own Australian and All Comers Record of 20.75, and further signals that the 24-year-old’s new training environment under Chris Nesbit at TSS Aquatics is starting to pay dividends.

20-year-old Kyle Chalmers finished off the podium in 4th in 21.63, as his back-half racing strategy can’t really be employed in a race that’s over in the blink of an eye.

21.44 is what was needed to claim a spot on the roster for Short Course World Championships per the Australian qualifying procedures, so both McEvoy and Jones should be safe to earn their spots.

World rankings-wise, McEvoy now sits as #3 among the world’s best. His 100m free from night 1 also sits as #3, which marks the first time we’ve seen McEvoy ranked in the top 5 in two events in quite a while.