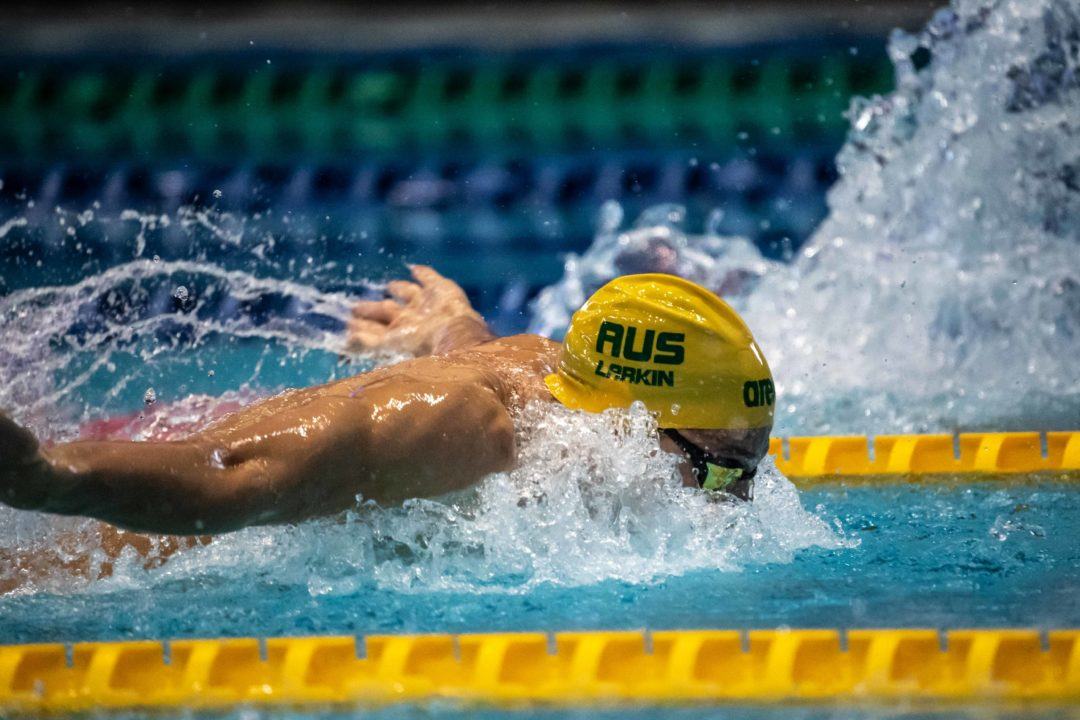 Splitting 50.63/53.13, Chalmers touched in 1:43.76 to take the Aussie SC title tonight in Melbourne and also safely ease under the Aussie-dictated qualifying time for Short Course World Championships set at 1:44.20. Chalmers’ PB remains at the 1:43.44 notched at this same meet back in 2016. For perspective, Chalmers won this 200m free on the Gold Coast at this year’s Commonwealth Games in a time of 1:45.56.

The newly-minted men’s 400m free World Junior Record setter from night 1, Elijah Winnington, was unrelenting in this 200m race this evening, sitting right at Chalmers’ hip throughout. The 18-year-old Bond athlete made his move at the 150m mark, but simply ran out of real estate and had to settle for silver just .01 behind Chalmers in 1:43.77.

Winnington’s effort tonight wipes his old personal best of 1:47.79 off the map and further demonstrates the emerging talent of this 2018 Commonwealth Games relay gold medalist.

Bond teammate Alexander Graham rounded out the top 3 in this men’s 200m in 1:44.10, while McEvoy finished off the podium in 1:44.40. Of note, Olympic medalist Mack Horton didn’t make tonight’s final, having mustered just a 1:50.34 in the morning heats for 30th overall.

For Chalmers, the stud now sits 6th overall in the world rankings, with Winnington right behind him in 7th.

Teenage Pan Pacs standout Ariarne Titmus fell just short of gold on night 1 in the 800m free, but came away victorious this evening in the 400m, with a new All Comers Record to boot. Registering the first sub-4:00 SCM 400m free time of her career, the 18-year-old St. Peters Western athlete notched 3:59.19 to shave .04 off of the previous All Comers Record of 3:59.23 held by Jess Ashwood.

Behind Titmus tonight was Carla Buchanan, who scorched her prelims time of 4:08.93 with a much swifter 4:02.70 this evening to very comfortably touch under the SC Worlds QT of 4:04.89.

Of note, 800m freestyle winner and multiple Junior Pan Pacs champion Lani Pallister was entered in this 400m free event, but wound up not swimming. As she already qualified in the 800m, she may be banking on a roster spot on this event based on her Jr Pan Pacs performance.

TSS Aquatics’ Maddie Gough was in the bronze medal position tonight, clocking 4:03.62, hacking almost 5 seconds off of her previous lifetime best of 4:08.27 notched at this same meet in 2017. As a refresher, Gough was slated to swim at the University of Wisconsin stateside, but has since decided against it.

With her winning time, Titmus becomes the 3rd female to delve into sub-4:00 territory in the SCM version of the event and now ranks 3rd in the world.

Do-it-all Emma McKeon didn’t disappoint this evening, capitalizing on the hole left by the Campbell sisters who aren’t swimming here in Melbourne. McKeon did the dirty double of the 100m fly and 50m free this evening, taking gold in both with finesse.

First in the 100 fly, McKeon dropped the hammer with a gold medal-garnering 56.72, beating her winning effort from last year by .07. McKeon was the only swimmer to notch a sub-57 second time, even a sub-58 second time, as runner-up Laura Taylor clinched silver in 58.16.

Brisbane Grammar swimmer Gemma Cooney finished in the bronze medal spot in 58.83. Only McKeon nabbed a SC Worlds QT, dipping under the 57.44 cut.

Several races later, McKeon was back in the pool to race the 50, beating the field in a victorious time of 24.01. 30-year-old Rockingham veteran Holly Barratt was a touch behind, hitting the wall in 24.15, while Nunawading’s Julia Hawkins rounded out the top 3 in 25.00.

A minimum time of 24.18 was needed to race this event in Hangzhou, so both McKeon and Barratt accomplished that consideration standard this evening.

Two men also qualified in the 200m backstroke, as mainstay Mitch Larkin got the job done in 1:49.07 to represent the only sub-1:51 swimmer of tonight’s field. Splitting 52.06/56.40, Larkin manhandled the field to win by over 2 seconds. His time overtakes his own previous season-beast of 1:49.52 that topped the men’s 2back rankings.

Next in line was Melbourne Vicentre’s Jordan Merrilees who cleared the 1:51.92 QT with a silver medal effort of 1:51.32, while Tristan Hollard wound up with bronze in 1:52.97, a big-time personal best.

Olympic gold medalist and reigning 200m back world champion Emily Seebohm scored the 100m IM win in this morning’s timed finals and was back for more in this evening’s 100m back. Seebohm successfully defended her title, taking gold in 56.53. Her outing kept teenager Minna Atherton at bay, with the 18-year-old teammate touching just .13 behind in 56.66.

Seebohm has already been faster this year, situated as the world’s fastest swimmer this season with the 55.81 thrown down at the FINA World Cup in Budapest.

Another teen, Youth Olympic Games gold medalist Kaylee McKeown finished in 57.80 to also stand on the podium on the event. A mark of 57.07 is what as needed to qualify, so both Seebohm and Atherton made the grade.

In the men’s 100m breast, Tommy Sucipto maintained his pole position from the morning heats, taking gold in 58.35. Only .04 back was Zac Stubblety-Cook, who notched 58.39 for silver, while TSS Aquatics’ Grayson Bell missed silver by a painstaking .01. He punched a time of 58.40 for bronze.

However, the Aussie-mandated QT rests at 57.65, so all of the top finishers fell short of that cut.

Although finishing off the podium, a pair of 15-year-olds in Thomas Hauck and Zachary Tan made their marks on the 200m IM final, finishing in 8th and 9th, respectively. For multiple age group record holder Hauck, the All Saints teen touched in 1:59.17 to represent his first time under the 2-minute barrier in the SCM version of the event.

Tan, who represents Singapore, finished in 1;59.33 to shave .61 off of his morning effort and come within a second of the national record.