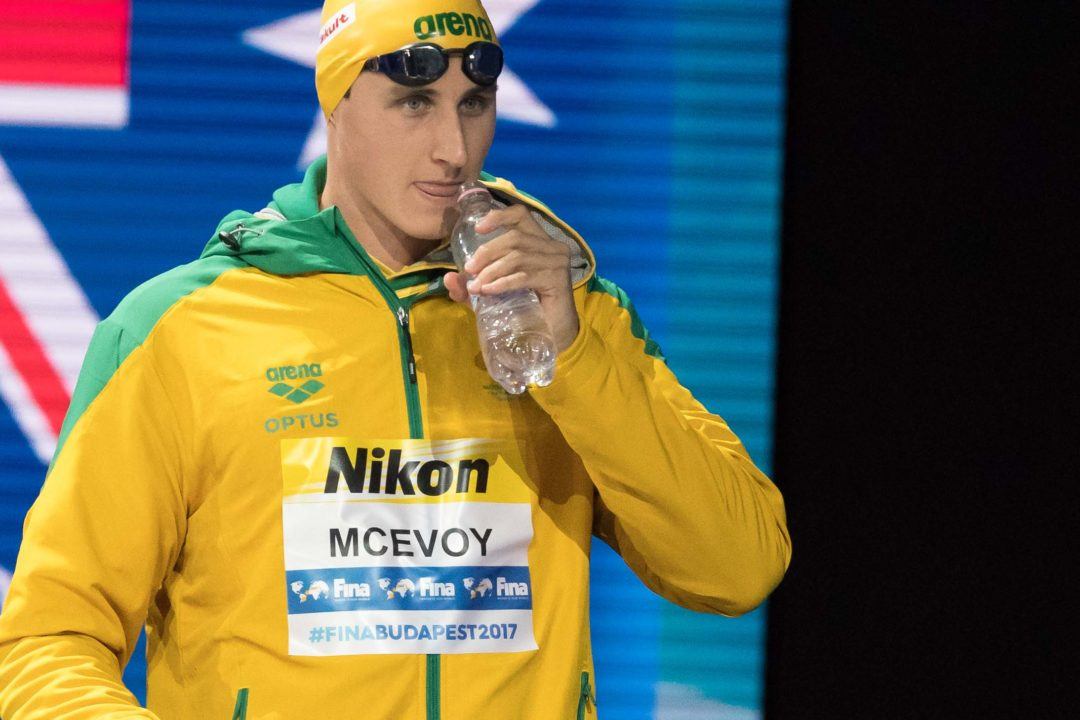 Cameron McEvoy raced his way to the pole position in the men's 100m freestyle this morning in Melbourne. Archive photo via Mike Lewis/Ola Vista Photography

The 2018 Aussie Short Course Championships kicked off with the first session of prelims this morning, with swimmers vying for the chance to represent the nation in Hangzhou this December.

According to Australia’s selection procedures, a maximum squad number of 20 will travel to Hangzhou, with selection priority given to those 1st and 2nd placed eligible athletes in the A final of individual Olympic events at the Aussie SC Championships, as long as they have equaled or bettered the established Swimming Australia qualifying time.

This morning, Chandler’s Jack McLoughlin staked his claim on the men’s 400m freestyle, taking up the top seed with a solid 3:40.28. That outing knocks 4 seconds off of the 23-year-old’s previous personal best of 3:44.39 from this same meet last year.

Just behind McLoughlin was Bond’s emerging talent Elijah Winnington who clocked 3:41.93 to wipe his previous career fastest of 3:46.02 off the map. Also among those making the final was Olympic champion Mack Horton, who notched the 7th fastest time of the morning in 3:48.41.

The women’s 200m backstroke saw 18-year-old Minna Atherton rise to the top, taking the pole position in 2:04.97. That was swift enough to stay ahead of 2017 world champion Emily Seebohm who slid into the #2 spot with her morning swim of 2:06.16. Melbourne Vicentre’s veteran Sian Whittaker rounded out the top 3 in 2:07.49.

Two women were under 1:06 in the morning heats of the 100m breaststroke, led by Jessica Hansen. She notched an AM effort of 1:05.49 to sit just under half a second ahead of Leiston Pickett‘s morning mark of 1:05.94.

Of note, 2018 Youth Olympic Games champion in the 50m backstroke Kaylee McKeown slid into the 10th spot in this off-event, earning a prelims time of 1:08.76.

Multiple Olympic medalist Emma McKeon notched the 5th fastest SCM 100 freestyle of her career this morning, hitting the wall in a time of 52.16. That was enough to hold almost a 2 second lead ahead of the remainder of the field, which included seasoned racer Holly Barratt who touched in 54.50 for the 3rd seed, as well as Olympian Madi Wilson who wrapped up the 4th spot in 54.55.

Speedster Cameron McEvoy made his presence known in the men’s version of the 100m free, taking the top seed in a swift 47.14. Behind him was Louis Townsend who touched in 47.36, followed by 2016 Olympic champion Kyle Chalmers in a mark of 47.67.

Melbourne Vicentre’s Jack Gerrard earned the 4th seed in 47.73, while Dan Smith and Elijah Winnington also finished in contention for tonight’s 100m free final in respective efforts of 47.73 and 48.15. Olympian Thomas Fraser-Holmes made it into the final as well, sitting as the 8th seed in 48.61.

The women’s 800m freestyle will be recapped with the day 1 finals report.

More PBs for McLoughlin & Winnington under 3-40

50s of stroke and the 100 IM are timed final events in the heats sessions so those athletes are not the top qualifier, but the champion in the event.

Will US have trials for SC Worlds?

No, the selection is done based on availability and coaches’ decision from the National Team (so, in some sense, Nationals and Pan Pacs were the selection meet). Selection documents had that they would be out last Friday, but we’re now hearing probably Monday or Tuesday.