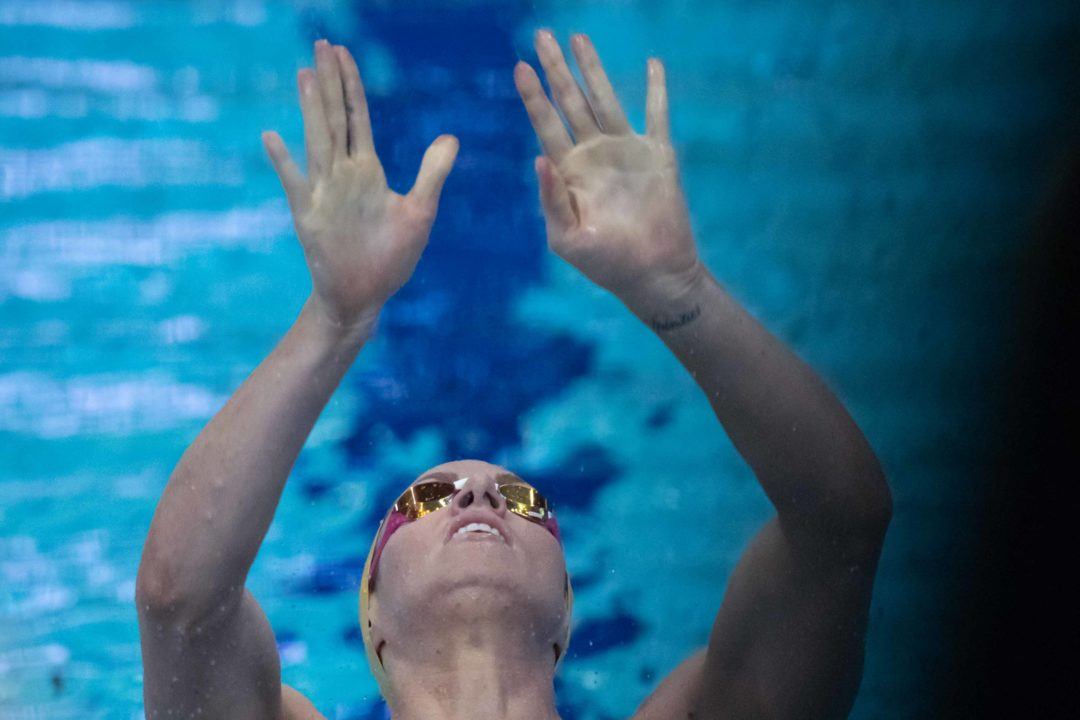 The final day of the 2018 Aussie Short Course Championships in Melbourne included the men’s 50m freestyle, with 100m freestyle gold medalist here, Cameron McEvoy taking to the pool once again. After his 100m free victory night 1, McEvoy landed off the podium in the 200m free and is looking to score another top finish in this furious sprint.

McEvoy opened his 100m freestyle in 21.85 and said he thought that boded well for his individual 50. Indeed he looked strong, nabbing the #2 seed in 21.44, with only TSS Aquatics partner Grayson Bell taking the top spot in 21.37.

Olympic champion Kyle Chalmers is lurking as the 5th seeded swimmer in 21.72, as the top 7 men of the 50m free this morning all dipped under the 22-second threshold.

Veteran racer Emily Seebohm already took victories here in the 100m IM, 200m back and 100m back and was entered to race 3 events on this final day. First up was the 200m IM, where the Brisbane Grammar athlete snagged the top seed in 2:11.91 ahead of St. Peters Western’s 400m IM winner from night 1, Abbey Harkin. Harkin touched in 2:12.99 to land a lane this evening.

Seebohm also soared in the 50m backstroke sprint, winning the timed final in a mark of 26.34. That proved fast enough to take gold ahead of 30-year-old Holly Barratt of Rockingham, who settled for silver in 26.40.

Minna Atheron, who finished as runner-up behind Seebohm in both the 100m and 200m here in Melbourne, rounded out the top 3 finishers in 26.57.

In her final day 3 event, Seebohm earned another medal to add to the 26-year-old’s tally, earning bronze in the 50m breaststroke in 30.62. It was Leiston Pickett who picked up the win in the only sub-30 second time of the field, finishing in 29.97, while Nunawading’s Jessica Hansen took silver in 30.20.

Newly-minted All Comers Record holder in the 400m freestyle, Ariarne Titmus took the top spot in the women’s 200m free this morning. Stopping the clock in 1:57.29, the 18-year-old holds a .08 advantage ahead of Marion’s Madi Wilson. Wilson, who has been rather quiet this competition, notched a 1:57.37, while USCS’ Mikkayla Sheridan made her presence known with a mark of 1:57.54.

Of note, 2016 Olympic bronze medalist in the LCM of this 200 free, Emma McKeon, was not entered in this event here in Melbourne. She has already qualified in the 100m fly, 100m free and 50m free and could still be discretionarily considered for this event.

Mitch Larkin was tonight’s 100m IM timed final winner, smashing a mark of 52.71 to take gold. Behind him was Matthew Wilson who touched in 52.83, while 24-year-old Jack Gerrard scored bronze in 53.01.

One time Wisconsin commit Maddie Gough was successful in this morning’s timed final 1500m freestyle event, taking the top prize in a mark of 15:49.91. That represents the first time Gough has been under 16:00 in the event as her previous personal best rested at the 16:02.34 collected at this same meet last year.

Very good performances in the 100 and 200 Im for Matthew Wilson, previously known above all as a promising breastroker.
And 15 year-old Hauck at 4.16 in the 400Im heat is another good signal for the future of Aussie swimming in the Ims (obviously the most concrete chance in the short term remains Larkin in the 200 Im LCM).

2
0
Reply
Not
Reply to  nuotofan

Will Austraila ever develop another backstroker? It’s been Seebohm for a dozen years….

Probably because Seebohm is still winning gold medals internationally. But in any case Kaylee Mckeown and Minna Atherton have both proven to be elite on the world stage.