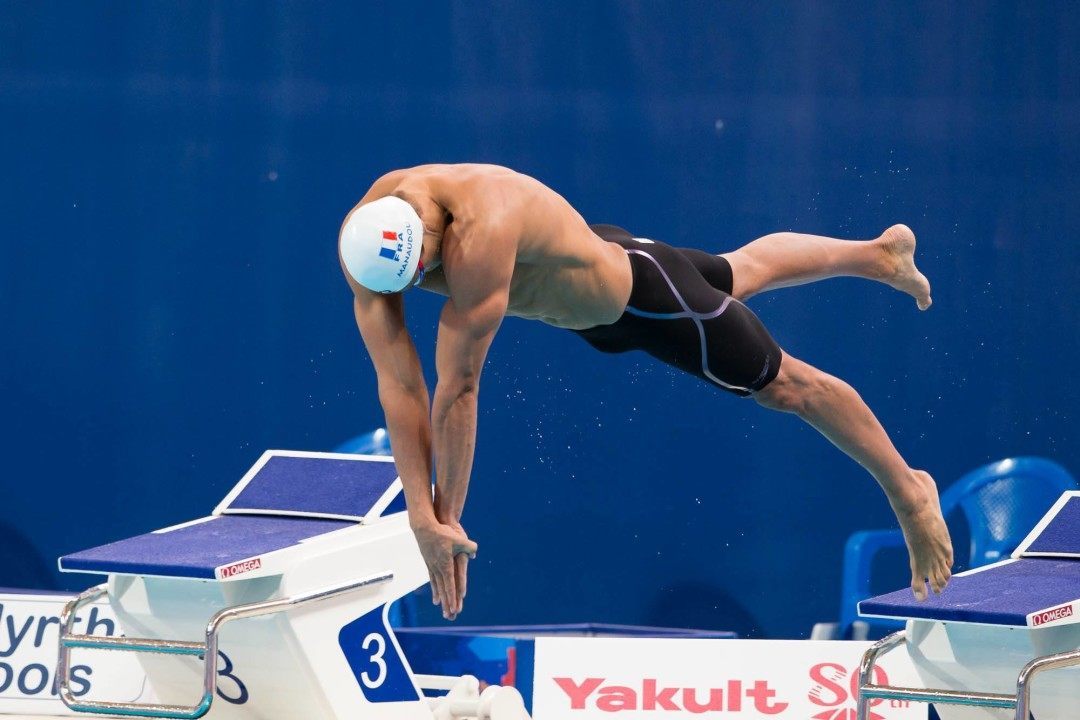 Florent Manaudou popped the third-fastest 50 free in the world so far this season, winning the event at the FFN Golden Tour Camille Muffat in 21.57. Archive photo via Tim Binning/TheSwimPictures.com

Records continued to fall on Day Two of the FFN’s Golden Tour Camille Muffat in Amiens. Sweden’s Sarah Sjostrom was the author of two of them, winning the 100 free and 100 fly easily and posting world top-5 times in each. Sjostrom won the first race of the evening with a dominant 53.53 in the women’s 100 free, besting Nice teammates Charlotte Bonnet (54.37) and Anna Santamans (54.93). The Swede followed that performance up with a blowout in the last event of the final session: she won the 100 fly by four body lengths in 56.37, the only sub-1:00 in the field.

French mid-distance star Coralie Balmy broke a Golden Tour record with her 4:04.58 finish in the 400 free. Balmy crushed the competition, finishing 7 seconds ahead of Italy’s Martina De Memme (4:11.66). It was a huge swim at this stage of the season for Balmy, and a full 1.1 seconds under the very strict French qualifying standards for Rio (although she will need to reproduce this swim in finals at French Trials at the end of March).

France’s Camille Lacourt won the men’s 100 back with 54.34, a time that is under the FINA A standard for Rio but misses the French standard by 1.1 seconds. Lacourt has been outspoken about the very tight standards for selection to Rio. Great Britain’s Charlie Boldison was second in 55.85, ahead of France’s Thomas Avetand (56.29).

Swimming is fast everywhere in the world right now.
I love the olympic year. 🙂

Care to explain how Coralie Balmy managed to swim 4:04 during training, only a second off her PB.. in 400 free?

Or just because she’s French, she’s beyond questioning, unlike other swimmers from other countries whom you’ve been questioning?

Marco Koch is throwing down 2:07s like they are routine. That WR is so going down.