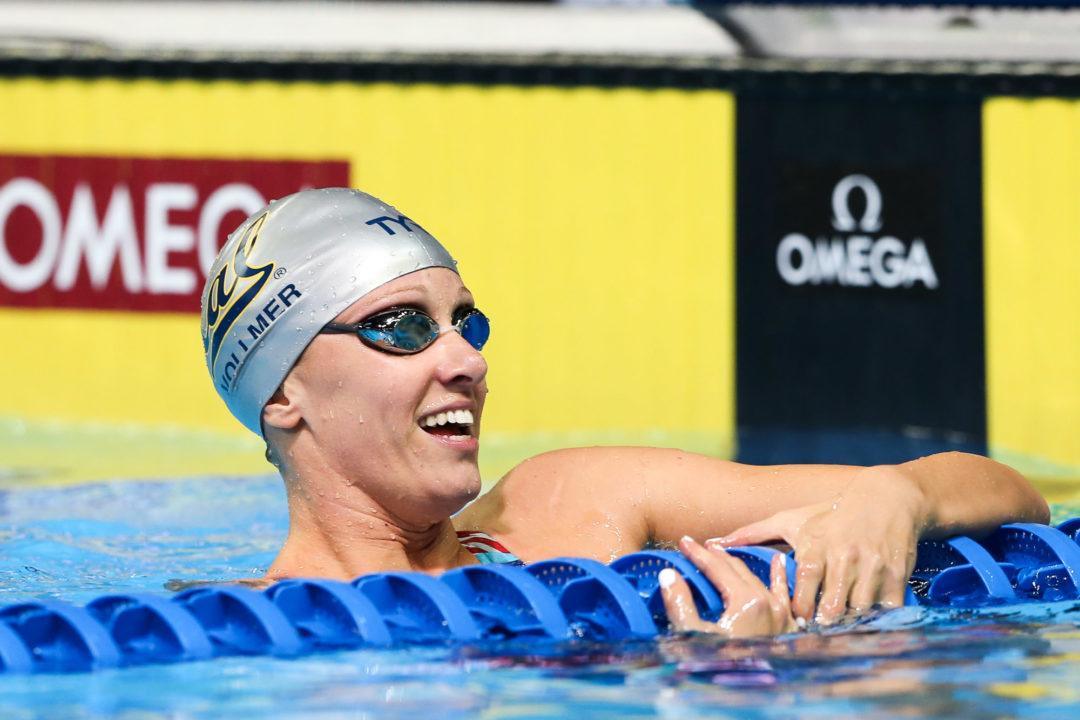 MICHAEL PHELPS OPTS OUT OF 200 FREE

Michael Phelps scratched out of prelims of the 200 free, essentially eliminating his chances to be a member of the 800 free relay in London. Heading into Trials, Phelps had attempted to swim a fast enough 200 free that he could still be named to the Olympic relay roster without swimming the event at Trials. However, Phelps was only able to post a 1:48.73 heading into Trials, which would not be fast enough to get him a spot on the Olympic team. There’s still a very slim possibility that Phelps could make the Olympic 800 free relay squad because Bob Bowman is the head coach of the men’s Olympic team, and could potentially still name Phelps to the relay.

After becoming the youngest American to break 1:00 in the 100 breast in history on Day 1, 17-year-old Michael Andrew posted another personal best in finals, going 3-for-3 on personal bests in the event at this meet. In finals, Andrew swam a 59.82, knocking another .02 seconds off his personal best from semi-finals, and the 17-18 National Age Group Record. Andrew also came in 4th as the youngest swimmer in the field, just .01 seconds from 3rd place.

The Kevin Cordes/Cody Miller showdown was an exciting race, although they both swam slightly slower than they did in semi-finals. After breaking the American, U.S. Open, and U.S. Nationals Records in semi-finals, Kevin Cordes got the win with a 59.18. Miller was right behind Cordes at 59.26.

Kelsi Worrell (now Kelsi Dahlia) used a late charge to defeat Dana Vollmer in finals of the women’s 100 fly. Based on the prelims and semi-finals, it seemed like a foregone conclusion that Kelsi Worrell and Dana Vollmer would be the 2 swimmers representing the US in Rio, but we were excited to actually get to see the young gun and the veteran go head-to-head in the final.

In her first finals appearance of the meet, distance star Katie Ledecky looked like she was going to break her own 400 free World Record for over half the race. Ledecky swam a 3:58.98, earning a very much expected spot on the Olympic Team in the event.

Leah Smith proved to us with this swim that she wasn’t content to simply take 2nd to Ledecky and earn a roster spot in Rio. Smith went out with Ledecky, and stayed on her feet for the entire race. Today, we’ve seen Ledecky lose a 400 free final at the 2019 World Champs in Gwangju, but at the time, seeing another swimmer stay with Ledecky for an entire 400 free was stunning. Smith easily came in 2nd, posting a 4:00.65, which made her the 2nd fastest textile swimmer in American history. The swim also proved the the Americans had a real shot at going 1-2 in the Olympics in the women’s 400 free.

Missy Franklin and Natalie Coughlin narrowly making a 100 back final feels like a bizarre dream, but it was reality in 2016. Expectations were high for Franklin after her historic 2012 Olympics, but there were questions surrounding injuries that had been plaguing her. The American Record holder (58.33), Missy swam a 1:00.45 in semi-finals, taking 7th place. Veteran Natalie Coughlin was right behind Franklin, swimming a 1:00.46 for 8th. 16-year-old Grace Ariola was just .03 seconds behind Coughlin, swimming a 1:00.49 for 9th place.

After the semi-finals of the 100 back, it seemed like we had to come to grips with the idea that Missy Franklin was likely not going to be on the Olympic Roster for the 100 back, one of her top events. Instead, it was Olivia Smoliga who stole the show, swimming a 59.16 to lead the way into Day 3’s final.

IS KATIE LEDECKY THE NEXT AMERICAN WOMEN’S DISTANCE STAR?

15-year-old rising star Katie Ledecky did what seemed like the impossible, breaking the 15-16 NAG Janet Evans held for 24 long years. Ledecky swam a 4:05.00 in finals of the 400 free, taking 3rd place and undercutting Janet Evans’ 4:05.45 15-16 NAG. At just 15 years old, Katie Ledecky will have a whole additional year to take that NAG down even further.

The record by Ledecky was so exciting for American swimming fans because we hadn’t seen a high school aged American women’s middle-distance swimmer break a NAG since Janet Evans. The record was 24 years in the making, and left swimming fans excited to see what Katie Ledecky would have in store for us over the years.

Fresh off American, U.S. Open, and U.S. Nationals Records in the semi-final of the women’s 100 fly, Dana Vollmer was as close to a sure thing for making the Olympic roster as you can get. Vollmer was ever so slightly off her semi-finals time in finals on Day 2, clocking a 56.50 (56.42 in semi-finals). She showed us again just how fast she can go out in a 100 fly, splitting 26.31 on the first 50. With all the relevant US records under her belt now, we would have to wait until the Olympics to see if Vollmer could return the World Record to an American swimmer.

American distance star Chloe Sutton made history on Day 2 of the 2012 Olympic Trials, when she finished 2nd in the 400 free to punch her ticket to London. This was a historic moment for USA Swimming. By qualifying for the Olympic Team in the 400 free, Sutton became the first American swimmer ever to make Olympic teams in both open water and pool events. Back in 2008, Sutton was on the open water Olympic Team in Beijing.

Sutton came in 2nd to Allison Schmitt, who nearly made history herself. Schmitt was out under World Record pace for the first 200 meters of the race. She fell off the pace a bit on the back half, but still picked up the win comfortably with a 4:02.84.

With Japanese superstar Kosuke Kitajima in the stands, Brendan Hansen delivered on his comeback. Hansen swam his fastest 100 breast of the meet, clocking a 59.68. The swim was a breath of relief for American swimming fans, giving hope for a 100 breast medal in London. Hansen made his 3rd consecutive Olympic team with the swim, accomplishing an ultra-rare feat.

Eric Shanteau swam a 1:00.15 for 2nd place, earning a spot on the Olympic roster.

Swimming just keeps getting faster. It’s great that we get to reflect on that now and realize how much slower 2016 might seem in 2020. Especially in the women’s 100 back…crazy how in what feels like yesterday a 1:00 would get you into finals, but if it happened in 2020 you’d need I guess a 59-low. Even the weak events seem to be getting faster and faster.

goes to show the dominance of Peaty!

Memorable quote from Rio Trials was after the 400m Free Final when Leah Smith told the interviewer: “I was able to see Katie Ledecky’s feet!”

Except in the 200m, that is an a big achievement!

I’ll admit that I don’t remember that, but it’s also been a long 4 years since then lol.

Yeah there was an issue with the lighting system. The big lights went out and the small moving lights stayed on for the first half of the race