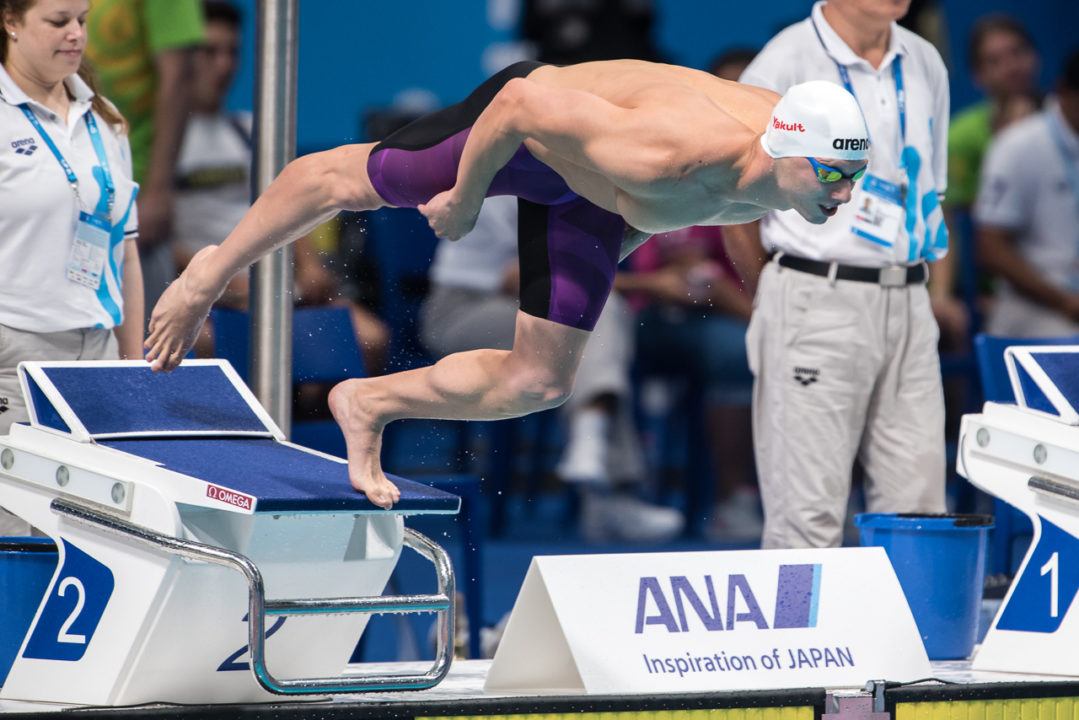 Dominik Kozma turned in a powerful performance in the men's 200m freestyle tonight, where the 27-year-old came close to his lifetime best and Hungarian National Record of 1:45.54 with a massive mark of 1:45.77 for gold. Archive photo via Mike Lewis/Ola Vista Photography

The final night of the 2019 Hungarian Open National Championships brought both highs and lows to the myriad swimmers competing for their chance to race this summer at the long course World Championships.

Among those qualifying were two Serbians in Sebastian Sabo and Caba Silađi , who won their respective 100m fly and 50m breast events in head-turning fashion, beating out stiff competition in the process.

Along those same fierce lines was Dominik Kozma‘s powerful performance in the men’s 200m freestyle, where the 27-year-old came close to his lifetime best and Hungarian National Record of 1:45.54 with a massive mark of 1:45.77 for gold tonight.

Splitting 51.06/54.71, Kozma shut down both Kristof Milak and Nandor Nemeth, the latter of which crushed a new 48.17 Hungarian National Record last night.

Kozma slides into the #3 spot among the season world rankings, becoming just the 3rd swimmer to notch a time under the 1:46 mark.

Milak ties Aussie Jack McLoughlin for 6th place in the world standings with his 1:46.90 outing, a time that obliterated his 1:47.73 gold medal-garnering mark from the 2018 Youth Olympic Games in Buenos Aires.

Iron Lady Katinka Hosszu was in the water twice tonight, but only came up with a World Championships qualifying time in one of the events. Racing the women’s 200m freestyle, Hosszu collected a winning effort of 1:57.78, beating runner-up Ajna Kesely by over two seconds.

Hosszu’s effort comfortably clears the 1:58.66 FINA A cut and checks the Hungarian in as the 10th fastest swimmer in the world this season. For 17-year-old Kesely, she was faster in Buenos Aires last year with her 1:57.88 time that won gold.

Hosszu’s other event was the 100m fly, where the 29-year-old earned her season-best, but fell short of the Gwangju-qualifying A cut of 58.48. Clocking a time of 58.68 topped the podium in the only sub-59 second outing the field.

Liliana Szilagyi took silver in 59.07, while Zsuzsanna Jakabos rounded out the top 3 in 59.41.

The 200m backstroke winner here, Katalin Burian, doubled up with the 50m backstroke victory in 28.72, the only sub-29 second time of the field to qualify for Gwangju.

Richard Bohus clocked 24.99 to take the 50m back, while Anna Sztankovics won the women’s 50m breast in 31.47. Just Bohus collected a World Championships qualifying effort with his gold.

Everyone else is getting so fast.

but Seli & Haas will be ready

What was the meet where Wang Jianjiahe swam 1:56.70? FINA’s database gives best time for this swimmer 1:57.31 at summer Nationals on 6/22/2018. How accurate are sources used by Swimswam and who are they? Whenever we are talking about world leading swimmers it’d better to be accurate.

When looking at the top 26 list of rankings on our site you can see the meet at which the performance was completed. Wang’s was done at October’s Chinese Nats.

Thanks. So results of this meet were not reported to FINA or were rejected by FINA for some reason or simply somebody who is responsible for managing this database neglected his/her job duty.
The 1:56.70 isn’t simply the time shown this season it is a personal best for this swimmer and says a lot about her abilities especially in the light of her phenomenal recent race in 800.

To be fair the FINA’s database is actually USASwim database, I think.