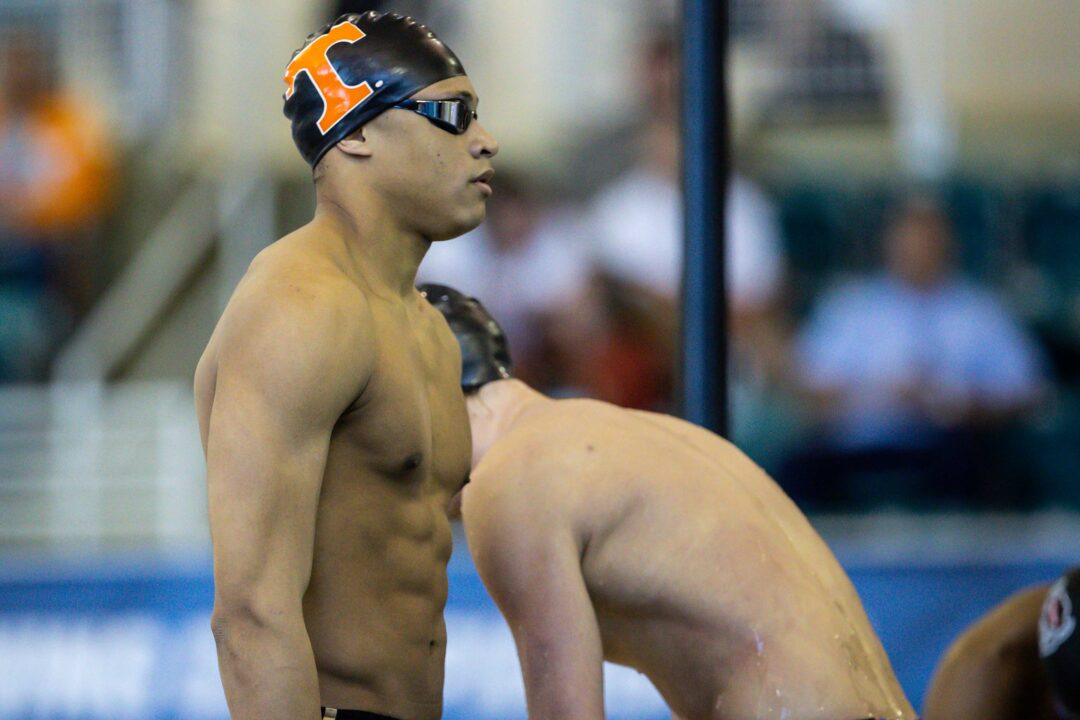 Crooks' time of 19.36 overtakes Florida swimmer Josh Liendo's 19.69 as the fastest time in the nation for the 50 free this year. Archive photo via Jack Spitser/Spitser Photography

On Saturday, the Tennessee swimming and diving team traveled to Wilmington, North Carolina to open up their season with an away dual meet against UNC Wilmington. The Volunteers came out victorious, with the men winning 216 to 78 and the women winning 190 to 105.

As seen in social media posts from the meet, neither team was suited.

Tennessee won almost every single event on the men’s side of the meet, and the only events where they didn’t win were the 200 IM and 200 free relay, where their fastest swimmers were all listed as exhibition swimmers.

The star of the show on the men’s side of the meet was Jordan Crooks. He won the 50 free in a time of 19.36, which overtakes Josh Liendo‘s 19.69 as the fastest time in the country for the event this season. It’s not very common that we see a time as fast as 19.36 this early on in the season, as last season, as of November 1, 2021, the fastest time in the country was a 19.47—over a tenth slower than Crooks’ October 1st time from this year.

This performance came just a week after Crooks’ eye-popping 50 free at the end of practice, where he was hand-timed and reportedly went 18.9 (although swims that are hand-timed usually do not give us the most accurate results).

Crooks’ best time in the 50 free is a 18.53, which he clocked at the 2022 SEC Championships to break Caeleb Dressel’s freshman record. He’s established himself as one of the best collegiate sprinters, having tied for third at NCAAs with a time of 18.60, but his early-season speed could indicate that he’s on a path to becoming the top gun. In fact, Crooks’ time today was faster than the 19.39 he went at mid-season invites last season.

You can watch Crooks’ 19.36 race from Saturday here:

Picking up where he left off!

Jordan Crooks posts a 19.36 in the 50 free, which is the faster than best time in the country entering the day by .33 seconds! #GBO x #IGTBATV🍊 pic.twitter.com/YFjfYAYJwF

Caribe’s times from this meet were particularly intriguing, as aside from his 19-point relay split, he also took second to Crooks in the 50 free with a 20.22 and went 43.86 to win the 100 free. He’s a freshman coming from Brazil, and his particularly fast times in early October bring up the question of whether he will have a breakout freshman season similar to what Crooks (who is also an international sprinter) had last year. The Brazilian isn’t new to sprinting success though, as he’s been as fast as 22.35/48.71 in long course (which converts to 19.41/42.44 in yards) and is a Brazilian age group record holder.

Another international swimmer who claimed victory was Michael Houlie, who won the 100 breast in 53.87. He beat his fellow fifth-year teammate Dillard who was second in 55.15. However, Dillard won the 200 breast in 2:00.65. Houlie and Dillard were Tennessee’s two fastest swimmers in the 100 breast last season, with Dillard having finished 8th at NCAAs in a time of 52.00 (although he set a best time of 51.29 to finish second at SECs).

Simillar to the men’s team, the Tennessee women won nearly every event besides the 100 free, 100 fly, 200 IM, and 200 free relay, having swum exhibition in the latter two events. The team was missing two of their biggest stars, Ellen Walshe and Julia Mrozinski. Walshe is staying in her home country of Ireland for the fall semester, and plans to return back to Tennessee for the winter. Another notable absence was Jasmine Rumley, a 21.81/48.41 freestyler who is the team’s fastest returning sprinter.

The only other event in which UNCW won (and actually posted the fastest overall time in) was the 100 fly, where Maura Schoppa touched first in 56.39. The 200 fly was won by Tennesse’s Kate McCarville, who went 2:02.49.

Crooks wins the 50 and 100 at NCAAs and TN MEN finish 8th. At least one foreign mid-year enrollee will do the trick! Go Vols

If you play that game with his best time, you get sub 17.

1.6 seconds is huge. You would call a 18.4 swimmer one of the best but a 20 flat swimmer just good. You just throw out numbers like they mean nothing.

I was Bjorn all the way on fastest 50 this year. Crooks may prove me wrong. Love to see some fast swimming!

43 in a speedo in his first yards meet 🤯

Welp officially we know the 19 low in practice wasn’t a fluke. Is there the chance he goes under 19 in a speedo some time this season.

Anyone know why AJ isn’t swimming? Her loss hurts but this article forgot to mention Jasmine Rumley who has been 21.8 and 48.4 (47.5 relay split). Will likely overtake AJ’s medley relay anchor spots.

Great opportunity this year for Burroughs, Carlton, and/or Harper to secure those last couple spots on the sprint free relays. Although 400 Free Relay isn’t as much of a weakness with Walshe, Morzinski, and Douthwright being able to swim down to the 100s.

Rumley wasn’t swimming today either. Forgot to add that, my bad.

I thought Kutsch was out of eligibility, but wouldn’t swear to it.