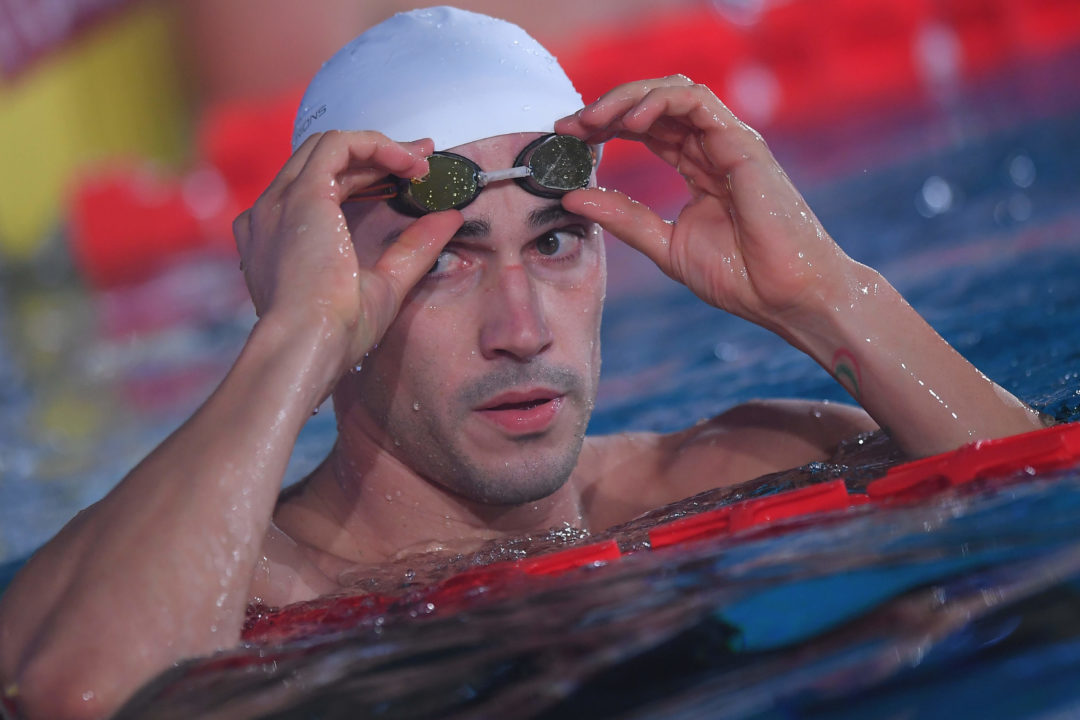 Despite the absences of Adam Peaty and Kirill Prigoda, the men's breaststroke field at the European SC Championships is loaded. Archive photo via Gian Mattia D'Alberto/LaPresse

The men’s breaststroke field at the upcoming European Short Course Championships in Glasgow is missing some big names.

Adam Peaty, the reigning Long Course World Champion (and world record holder) in the 50 and 100 breast won’t be there. Neither will the current LC 200 breast champion Anton Chupkov, or his Russian countryman Kirill Prigoda, who won the 200 at both the 2017 SC Euros and 2018 SC Worlds.

However, despite these absences, the men’s field maintains a very deep field that promises to require some very fast times to get on the podium. Below, we preview each of the three men’s breast races.

In the 50, coming in with the hot hand is defending champion Fabio Scozzoli. The Italian broke the European Record at the 2017 Championships in Copenhagen in a time of 25.62, and equalled it in late November at the International Swimming League’s European Derby. Post-race the 31-year-old mentioned how he was surprised by the time considering he had just started resting for Euros, indicating he could be even faster in Glasgow.

The other men competing who have been sub-26 this year are Russian Vladimir Morozov, Belarusian Ilya Shymanovich, and Scozzoli’s fellow Italian Nicolo Martinenghi.

Morozov hit 25.89 at the ISL meet in London alongside Scozzoli and his 25.6, breaking into the 25s for the first time. The 27-year-old has no major international medals to his name in this event, primarily competing in freestyle, but was the silver medalist at the 2016 SC Worlds in the 100 breast and is clearly coming in on good form.

Shymanovich, who is the only one of the four gearing up for the ISL Final in December as a member of Energy Standard, has been consistently fast over the last two months as well, clocking a season-best 25.97 in London, and was a dynamite 25.77 to win silver at Worlds last December.

Martinenghi, who is just 20, scored a new lifetime best at the ISL Naples meet in 25.98, and will be hungry for a medal after taking eighth two years ago and ninth last year at Worlds.

Also in the mix is Turkey’s Emre Sakci, who was 25.89 to take fifth at Worlds last year, and Slovenian Peter John Stevens, who has cracked 26 seconds on a pair of occasions in his career but not in the last two years. He’s been as fast as 26.46 this year.

Shymanovich comes in as the top seed and arguably the favorite in the 100 breast having been 56.32 this year and a personal best 56.10 to win silver at SC Worlds. And after becoming the #2 performer of all-time in the long course event back in May, he may just bust into the 55s here.

Somewhat flying under the radar here, seeing as he didn’t compete in the ISL, is the Netherland’s Arno Kamminga, who blasted a 56.20 at the Martinez Cup in October. He’s a major threat, as is Scozzoli, who has only been 57.2 this year but won silver two years ago in a best of 56.15 and also hit 56.30 last December.

Shymanovich has the ISL Final two weeks after this, meaning he may not fully rest here, while Kamminga’s sole focus will be in Copenhagen. That could push the Dutchman over the top.

Behind those three there’s an incredible 10 others entered in between 57.1 and 57.9, including Sakci, Martinenghi, and Brits Ross Murdoch and James Wilby. 200-meter specialist Marco Koch could also be in the hunt here, but given he was only 58.8 at the ISL’s US Derby in College Park (and 2:03.7 in the 200), it’s clear where his focus is.

With 14 swims sub-2:02 throughout his career, Koch is the current gold standard in the men’s SCM 200 breast. The two-time champion will be looking to get back on the top of the podium after taking second in Copenhagen, but will need to be on his best form to do so. That 2:03-high from mid-November is a positive sign.

Then there’s Kamminga, who looks poised to crack 2:02 here after falling a tenth off his best time in October (2:02.56), and Russian Mikhail Dorinov rounds out the swimmers entered under 2:03. Dorinov is strictly a SC 200 breast specialist, having been 2:03.9 in early November and holding a career-best of 2:01.8.

Murdoch, Shymanovich, Swede Erik Persson and Iceland’s Anton McKee will also be in the hunt for a podium spot, and after a long course breakout, Wilby should also be a player. The Brit only holds a best of 2:06.4, but was 2:07.4 in the big pool last April which could translate into a big swim if he’s rested.