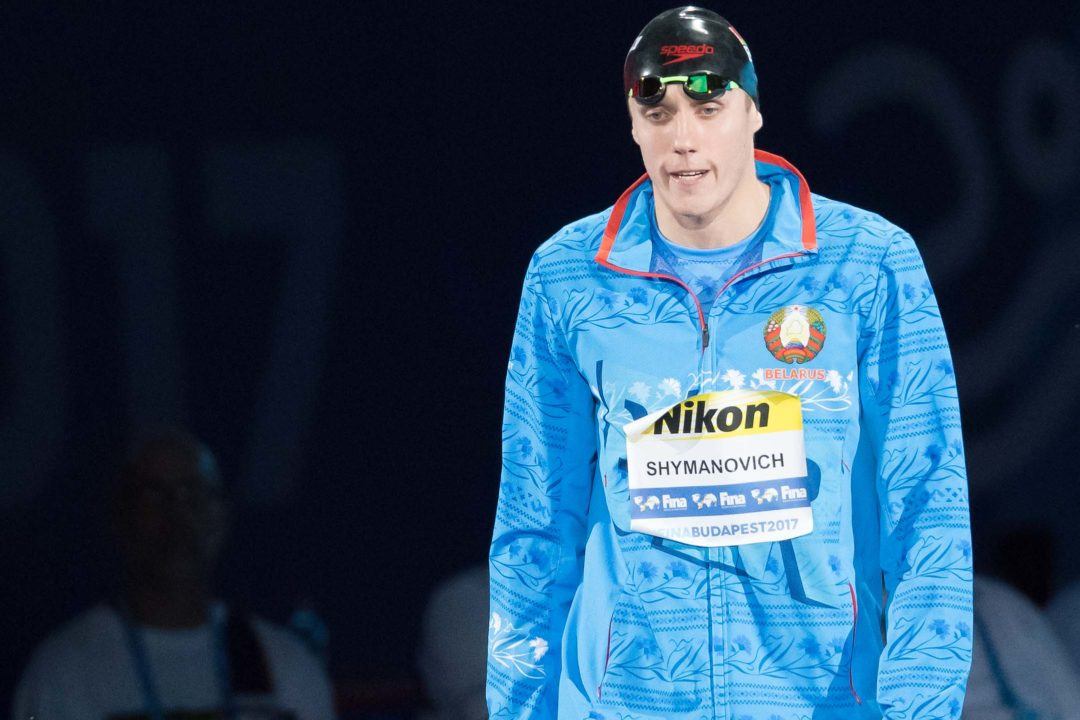 Belarus' Ilya Shymanovich already turned in one impressive 100m breaststroke performance today while competing in Marseille, but the 24-year-old took things to an even more eye-popping level with his final appearance. Archive photo via Mike Lewis/Ola Vista Photography

Belarus’ Ilya Shymanovich already turned in one impressive 100m breaststroke performance today while competing in Marseille, but the 24-year-old took things to an even more eye-popping level with his final appearance.

Entering Marseille, Shymanovich’s personal best and Belarusian National Record in the 100m breast event stood at the 59.40 registered at the 2018 Belarus National Championships. Prior to that, his previous best was the 59.84 he put up at the 2018 European Championships in prelims. There he went on to produce a slower 1:00.14 in semi-finals to miss out of the Glasgow final.

Fast forward to today, however, and Shymanovich produced the swim of his life, crushing a new meet record mark of 58.79 in this morning’s prelims. Splitting 27.34/31.45, Shymanovich laid waste to the morning field to take the top spot and punch a time worthy of qualifying for this summer’s World Championships.

But, Shymanovich had designs on dropping his newly-minted Belarusian National Record even further, punching a mercilessly fast mark of 58.29 to take gold and further establish himself among the event’s greats.

With British Olympic champion Adam Peaty owning the top 12 times in history, this means Shymanovich now shimmied his way into #2 on the all-time performers list.

This is crazy! We’re gonna start seeing some 57s from other swimmers soon.

I’ll believe it when I see the drug tests…

He has been around awhile – I’m guessing he’s been tested many, many times.

He has been around a while – which is why a sudden huge breakthrough like this raises eyebrows.

Didn’t see that one coming

Wow! I expected another man 58low before Tokyo, but not this soon! He posted a video on IG a few weeks ago underwater – Similarly to Peaty, his kick is very ‘straight’. I saw him a few years ago at Euros and it was a lot ’rounder’ back then. Looks like big technical changes so I wouldnt be too suspicious despite his age and (sorry to say it) nationality. Props to the guy!

Prime sprinting age for a male is probably 25-28 or so (and lately, that upper bound has been challenged quite a bit by guys like Grevers, Phelps, Cseh, Plummer, etc.). This guy is right around the age where I’d expect him to start reaching his peak in terms of strength and power so I’d argue there is nothing suspicious about his age.

I wouldnt argue that point – It’s the age plus the % increase that perked my nose a tad. Almost 2% in 1 day is pretty big for somebody in their mid 20s – I think his technical changes may explain it though; Heemskerk did the same a few years ago. He was 60.2 a few weeks back in his 1st swim of the year so there may well be more to come – Exciting.

Be cool if he can go sub 58 and push Peaty at Worlds. As we saw with 2016 medley relay, with someone to race Peaty’s even more ballistic.

Nope, very much it’s own country. Perhaps, somehow, still more secretive and ‘Soviet’ than Russia though. Their President is a good friend of Putin and actively wants Belarus to rejoin Russia. Their sportspeople do also have a horrendous record with doping though – Herasimenia was busted twice I think. Ilya seems a little more ‘open’ than most though – Swims the European circuit all year etc.