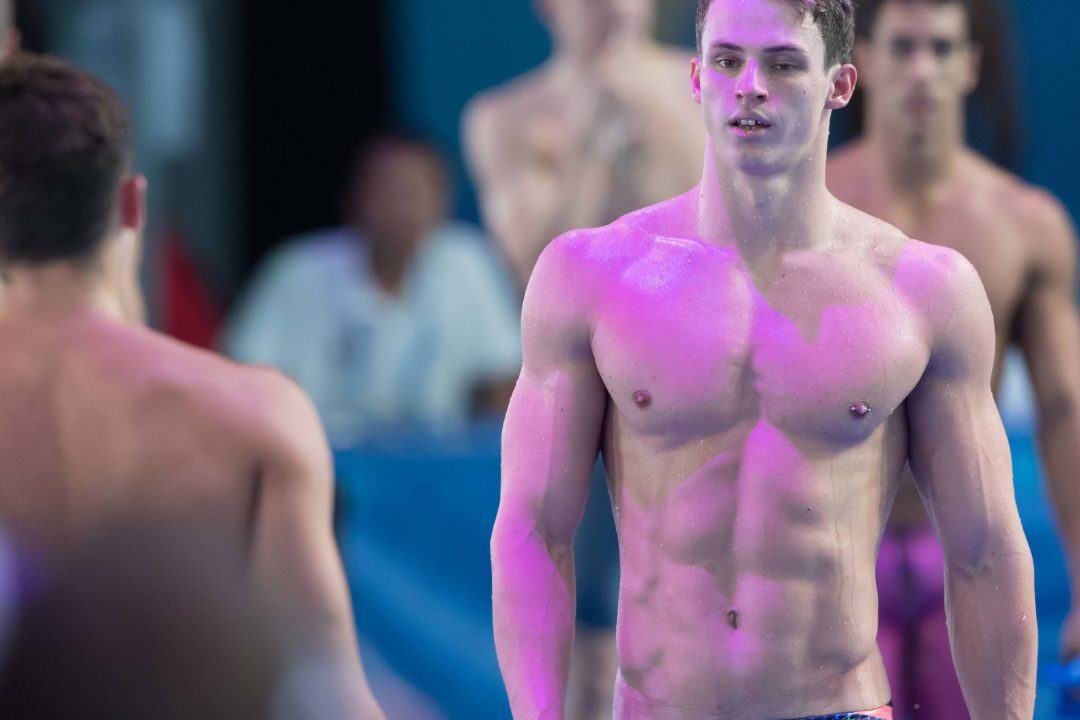 Ben Proud, Kathleen Baker, Katinka Hosszu were among the competitors in Marseille who threw down some head-turning times on day 1 of the FFN Golden Tour. Archive photo via Mike Lewis/Ola Vista Photography

British sprinting beast Ben Proud put his fellow thoroughbreds on notice, winning the men’s 50m freestyle battle here in Marseille by a hefty margin. Setting himself up as the top seed with a morning time of 22.34, Proud made it clear that was just a warm-up swim for him, as the Energy Standard athlete threw down some major heat in the evening.

Hitting the wall in 21.85, Proud easily took the gold ahead of runner-up finisher Jesse Puts of Netherlands, who was .03 faster than his morning effort to log a silver medal-worthy 22.33. France’s Clement Mignon rounded out the top 3 in 22.39, just under a tenth faster than his AM effort of 22.47.

Proud has already been as fast as 21.71 this year while competing at the Euro Meet in January. The fact he’s hitting this kind of speed 4 weeks out from the British Championships is slightly terrifying.

Belarus’ Ilya Shymanovich rocked the winning time of 27.00 in the men’s 50m breaststroke, collecting a new FFN Golden Tour Record in the process. Behind him was Arno Kamminga of Netherlands, who touched in 27.71.

For the women’s edition, Tes Schouten got her hands on the wall first to take 50m breast gold in 31.31, while Shymanovich’s teammate, Alina Zmushka, wrangled up silver in 31.46.

Melanie Henique took the women’s 50m fly win, racing herself to the top of the podium in 26.21. That finished just a hair ahead of visiting American Kendyl Stewart, who finished just .06 later in 26.27. Stewart’s personal best rests at the 25.83 she put down at the 2018 U.S. Nationals.

Hosszu showed she came to play this morning, powering her way to lane 4 with a heat time of 4:34.79. The multi-Olympic champion was even slightly quicker this evening, taking gold in 4:33.83 to make her Marseilles statement. Her outing rockets Hosszu to #2 in the world rankings this season, sitting only behind Japan’s Yui Ohashi. We’ll see how Ohashi responds at the Japanese Championships next month.

For her part, Belmonte finished with a respectable time of 4:46.33, a mark that seems downright sluggish only when compared to Hosszu’s monster swim.

Two other items of note from the women’s 400m IM include Serbia’s Ajna Crevar being disqualified in the final, and Anastasia Gorbenko notching a new Israeli National Record of 4:47.58 in the prelims.

Crevar was back in the pool for the last event of the session, as was Belmonte, however, as both women took on the 400m freestyle. But, both women bowed to Australian Maddie Gough, who put up one of her fastest performances ever with a winning time of 4:10.98.

Gough’s effort places her within the world’s top 15 performers so far this season, while Belmonte and Crevar settled for silver and bronze with respective efforts of 4:12.72 and 4:14.27.

Verraszto got the job done in the 200m IM after his 200m fly silver, with the Hungarian winning in 2:01.29. Greece’s Apostolos Christou nailed the winning effort in the men’s 100m back, clocking the only sub-54 second time of the pack in 53.90.

Although Dutch swimmer Kira Toussaint fell just short of the gold medal in tonight’s 100m backstroke, the comeback kid tied her own National Record in her first race back after being vindicated from a doping test debacle.

Toussaint already earned a World Championships qualifying time this morning with her top-seeded effort of 59.82,  and she managed to shave .02 off of that mark to take silver tonight in 59.80.

Topping the women’s 100m backstroke podium this evening was American Kathleen Baker. Baker hit the wall in 59.05 to exceed her time clocked recently at the Pro Swim Series in Des Moines. There, she touched in 59.17 for the top time in the world.

His shoulders are not human. Need to know his workouts.

What were these 4:34, 4:33 shown during one day? Are we at the beginning of new cycle that starts at the age of 30? And if there were people like me that didn’t believe that it was possible to drop natural way 5sec
in the second 200m of 400IM
just in one year
at the age of 27
without showing any improvement in general form or endurance in any other events
then these people have to stop worrying about that: THE BEST IS YET TO COME.

Not quite sure if you are saying good job or cheater with that post. Can you clarify?

I’m sure he says cheater as always about Katinka, but doesn’t matter.

Boooring….probably that’s why you are single?