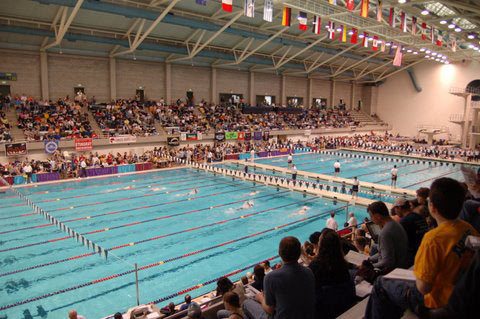 In a meet decided by the final event, the Liberty Renton girls managed to edge 2018 champion Sammamish by four points to secure the team title. Stock photo via PAC-12

Though Liberty Renton only saw victory in the 200 free relay, several top four finishes, as well as A-finalists in every event except for the 200 free and 100 breast, contributed to their team title. Keaton Canaday (200 IM/500 free), Salena Lam (50 free), Eleanor Bracht (1 meter), and Dominique Visperas (100 fly) all had top-four finishes.

Team title runner-up Sammamish opened the meet with a dominant performance by swimmers Kayla Chenier, Milan Manfredi, Jillian Weber, and Katie Walz in the 200 medley relay, posting a 1:50.82 to win the event by over two seconds. Liberty’s quartet of Shaye Agnew, Lily Stempson, Dominique Visperas, and Savanna Taylor posted a 1:53.55 to narrowly finish in third behind Aberdeen (1:53.29).

Sammamish would end the meet with another dominating relay performance. With a lead-off from Walz that was almost three seconds faster than any other starting swimmer, Sammamish controlled the race wire-to-wire, finishing in 3:39.95. Liberty finished in second with a time of 3:43.19 to secure the team title.

More from Luke Herman
See All